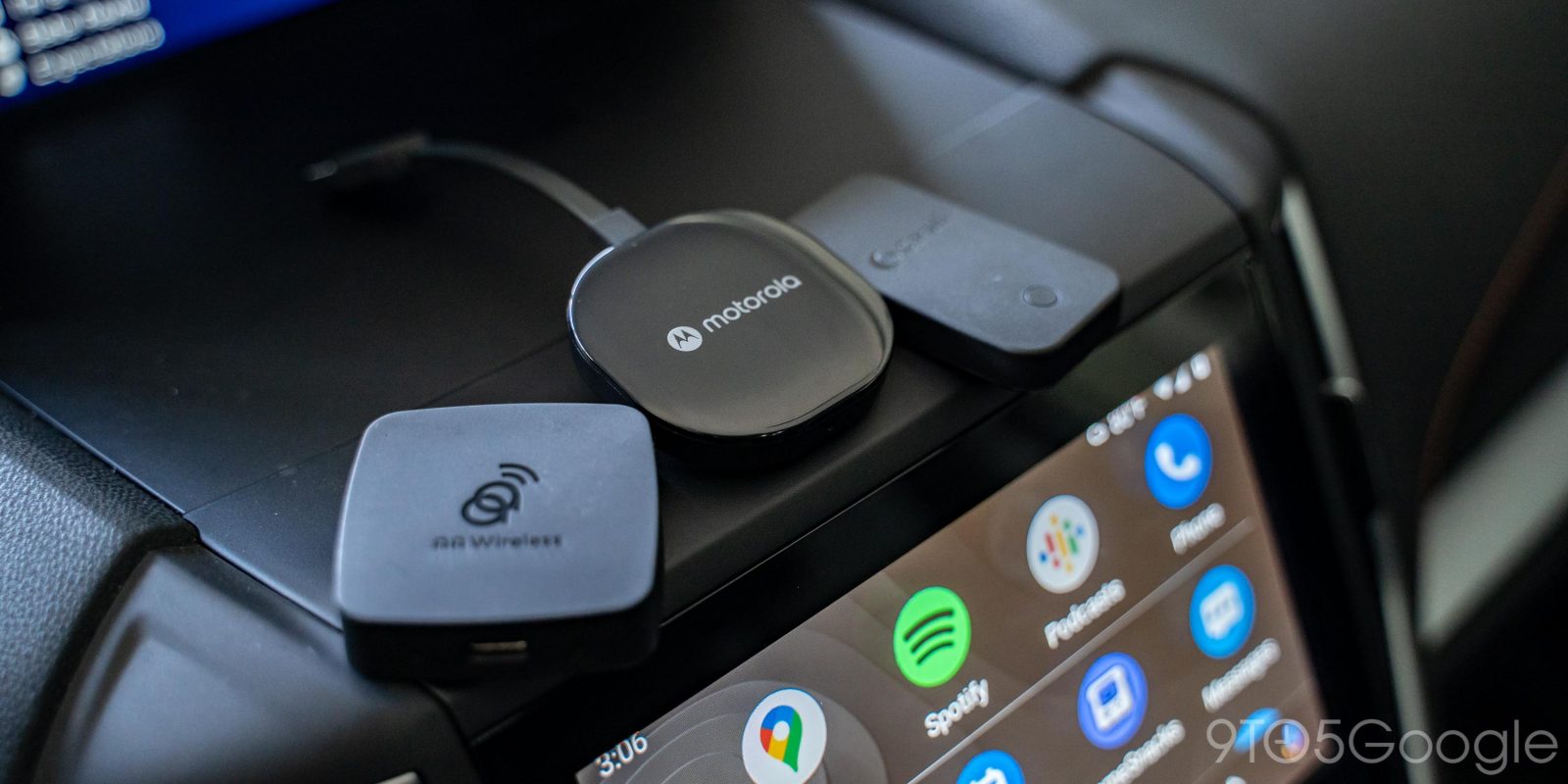 What is a wireless Android Auto adapter?

Android Auto is typically used in a wired form, with a cable connecting your car to your phone. That connection slowly charges your phone while transmitting data over to the car to project Android Auto on the infotainment display. Wired Android Auto has become commonplace in virtually every new vehicle, but its wireless counterpart very much has not.

As such, a trend has emerged to offer adapters that can take over a car’s USB port and connect to your phone wirelessly. This was originally done through unofficial means, but Google has actually officially licensed at least one product to support the functionality.

There are currently three adapters that can add wireless Android Auto to your car. The first one that was released was AAWireless, which is developed by a small team and was brought to the market on the back of crowdfunding. The simple adapter has a detachable cable that connects to your car and projects wireless Android Auto to your car. It has a companion app that can deliver firmware updates, assist with pairing, and make more advanced tweaks to the experience if you opt to do so. AAWireless is the jack-of-all-trades in this comparison, offering a simple setup with more under the hood.

AAWireless costs $85 and is still shipping through Indiegogo, usually with a one-month wait, depending on the region.

The Motorola MA1, meanwhile, is the only product officially licensed to deliver wireless Android Auto to vehicles. It has a built-in USB-A connection and works without any apps. Just pair over Bluetooth and the rest is handled as if you were wired to the car. The focus of the product is simplicity, a goal it certainly reaches.

MA1 has been incredibly popular among customers, and that’s led to the $90 wireless Android Auto dongle being completely out of stock at Amazon and Target for weeks. You can try your luck with alerts, but this is a hard device to get your hands on.

There’s also another wireless Android Auto adapter that was born out of crowdfunding, Carsifi. This dongle is similar to AAWireless in that it has a companion app for advanced functions and updates, but has one stand-out feature in a quick switch button that allows you to easily switch the phone that the dongle connects to.

We’ve been using Carsifi for a little bit at this point, with a review forthcoming, but the $90 dongle seems like a solid option so far. It can be purchased through Indiegogo, typically shipping within a month according to the pledge page. Do keep in mind, of course, that as with any crowdfunding campaign shipping delays can and do happen.

Will these adapters add Android Auto to my car?

One of the biggest questions we often see about wireless Android Auto adapters is if they will add Android Auto to a vehicle that didn’t already have it.

Sadly, the answer to that is no. Your car must have the wired version of Android Auto, whether officially through the built-in infotainment system or through a head unit, to enable the connection wirelessly. These adapters only ditch the cable requirement.

Will my phone work with a wireless Android Auto adapter?

Generally speaking, the vast majority of phones released in the past three to four years will work with a wireless Android Auto adapter. The exact requirements are as follows:

What if my connection drops?

If you notice that Android Auto isn’t connecting to your car, despite your phone already being paired, simply turn Bluetooth off and then back on again. Generally speaking, the phone and car will quickly reestablish their connection and things will be back in working order. Of course, your results may vary. Other troubleshooting steps may include:

In the case of a wireless Android Auto adapter, another surefire troubleshooting step is to simply unplug and plug back in the adapter. That restarts the pairing process.

Some owners of wireless Android Auto adapters have also noted that connections will tend to drop in certain areas. These devices do use 5GHz Wi-Fi Direct to transfer data between your phone and the adapter, so interference is certainly possible in some areas, though we wouldn’t say it’s particularly likely or common for most uses.

Is it normal for my phone to get hot while using Android Auto?

As mentioned, Android Auto adapters use Wi-Fi to transfer data from the adapter to the phone without any wires. Just like a mobile hotspot, this can result in your phone getting particularly warm while using an adapter. This is completely normal and, generally speaking, safe. However, if you live in a warm climate or have an especially hot day, it would be smart to ensure your phone is in reach of the AC or keep it shielded from direct sunlight.

Can I use an Android Auto adapter with multiple phones?

Yes! Most wireless Android Auto adapters are more than up to the task of connecting to multiple smartphones. Motorola MA1 and AAWireless can both remember multiple devices but will connect to whatever they’ve most recently paired with. If you have two paired devices in the car at the same time, you’ll want to turn off Bluetooth on the one you don’t want to connect to.

Carsifi, meanwhile, is designed with a button that can toggle between previously paired phones.

Are there any adapters for both Android Auto and CarPlay?

At this time, unfortunately, there are no solutions that support both wireless Android Auto and wireless CarPlay on the same device. That’s certainly unfortunate, as it’d be a wonderful tool for families that have a mix of Android phones and iPhones.