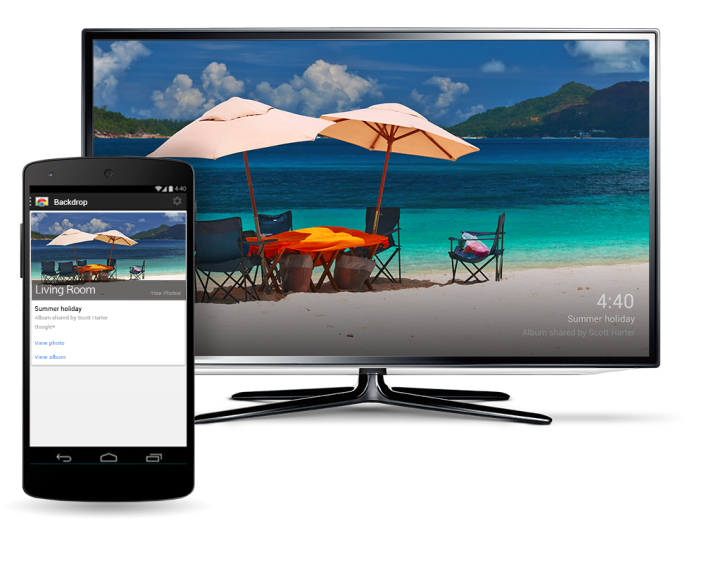 Google today updated the Chromecast app for Android users adding a feature announced earlier this year at Google I/O called Backdrop. When the Chromecast HDMI streaming stick isn’t playing content like Netflix or Pandora Radio through your TV, it already displays the current time and featured photos as a screen saver, but now Chromecast users can display additional content like weather conditions and news headlines on Chromecast-connected TVs. Chromecast also now supports using your own photos from Google+ albums as the backdrop.

Chromecast users can adjust the preferences for what content is displayed across the TV as well.

Options include toggles for featured photos from the web, satellite images of Earth and space, news and lifestyle headlines including politics and business news, featured art from museums, local weather, and Google+ album photos.

The latest version of Google’s Chromecast app for iPhone and iPad links content displayed on Backdrop with the Android app. This means if you see a news article flash by on the TV screen with a headline, photograph, and source, you can open the Chromecast app on Android to read the article in full. This also extends to other content displayed on Chromecast as a backdrop including opening locations in Google Maps and viewing photographs at their source on the web.

The update to Chromecast follows the release yesterday of Google’s existing ‘News & Weather’ Android app on iOS. Chromecast for Android is available for free on the Play Store and rolling out now. Google’s Chromecast HDMI streaming stick retails for $35 or less on Amazon and other retailers.