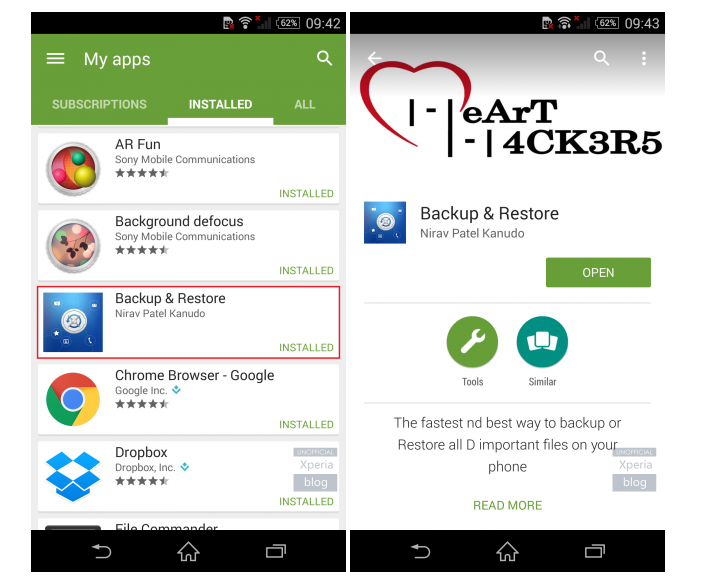 Sony’s Backup & Restore Android application that comes pre-installed on its Xperia Z3 smartphone appears to have been compromised. A Google Play entry has been added for the app listing “Nirav Patel Kanudo” as its publisher, along with the software’s description claiming that it’s managed by the “HeArT HaCkEr Group.”

Prior to this questionable situation, Backup & Restore was available as an in-house solution for Sony device owners looking to keep a copy of their phone’s critical information like apps, media, SMS’ and contacts. According to the Google Play listing, this potentially malicious software was published this past weekend, but there doesn’t appear to be an official build released by Sony.

The folks over at XperiaBlog discovered the shady application while viewing the My Apps section of Google Play from an Xperia Z3. Sony has acknowledged this application on a support forum, saying that it’s looking into the situation, but in the meantime, Z3 owners will definitely want to avoid this software.

We’ve reached out to Sony for further comment on this matter and we’ll be sure to update this article of the company has anything new to add.

Update: A Sony spokesperson has provided the following statement regarding this matter:

It appears that an unauthorised 3rd party developer created an application using the same name and identifier as our “Backup & Restore” service, and uploaded it to Google Play.

As the app mirrored our ‘Backup & Restore’ service naming structure, it appeared as downloaded on some products within Google Play’s “My Apps”, when in fact it wasn’t actually installed. We don’t provide ‘Backup & Restore’ on Google Play – it is pre-installed on Xperia devices, with all version and maintenance updates handled directly through our Update Center. This application posed no risk to users, but has since been removed from Google Play.