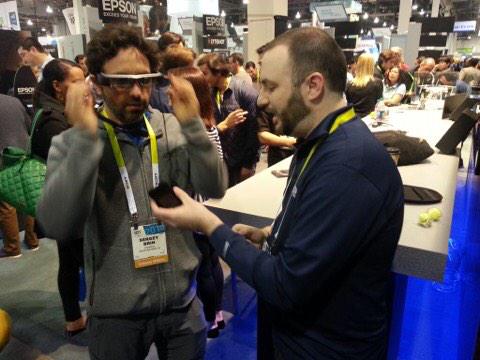 Google might not have an official presence as an exhibitor at CES, but it does have its people on the ground checking out the new products from both its partners and competitors. That includes top Googler Sergey Brin who was spotted in the photo above via +Tim Moore on Google+.

At CES, Epson is showing off a number of software tools for the smart glasses for both business and consumer-facing apps as well as new lens options from Rochester Optical.

Some reports have popped up in recent months questioning Google’s dedication to the Google Glass project as it remains in developer mode and the company focuses more on its Android Wear platform for smart watches and wearables. Google executives, however, seem to be more confident about Glass living on and a revised version of Glass with an Intel chip offering increased battery-life is reportedly slated for this year.

Google doesn’t have its own booth or products at the show, but it does have a number of partners showing of Android TV and mobile products. It’s also running a small campaign handing out Android themed pins through its partners at the show.