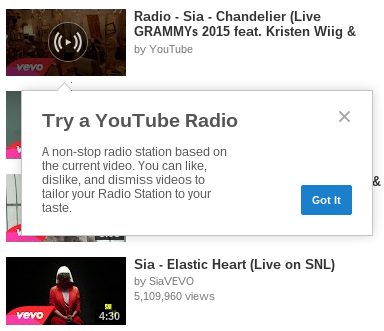 YouTube appears to be experimenting with a new feature dubbed “YouTube Radio” that expands on its current “YouTube Mix” playlist feature to offer non-stop radio station based on the currently playing video (via Google Operating System).

The feature, as pictured above, is described as “a non-stop radio station based on the current video.” Users will be able to customize the experience somewhat with options to “like, dislike and dismiss videos to tailor your Radio Station to your taste.”

The feature is similar to the current YouTube Mix feature that offers playlists of 50 videos also based on content the user is watching. Google appears to be experimenting with the new and improved YouTube Radio feature with a select group of users.

It’s unclear how the feature might play into YouTube’s recently launched Music Key service offering access to music streaming on YouTube ad-free, in the background on mobile, and offline for $10/month. A radio feature was something several reviewers noted the service was notably lacking.