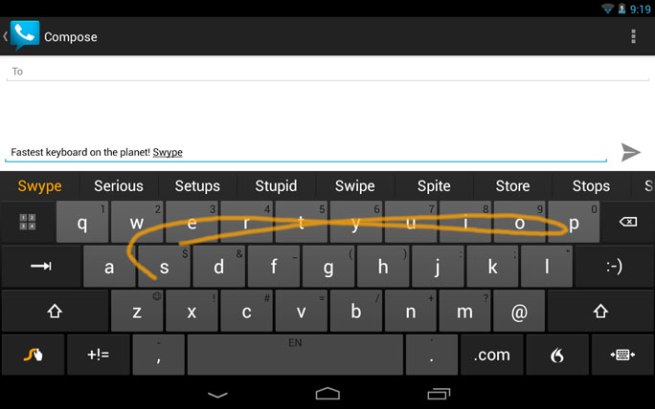 Before today typing numbers and special characters like the dollar or pound sign required holding your thumb down over the keys which included those secondary characters, or switching between alphabetical and numerical keyboards. Now, however, if you slide over keys with numbers and special characters attached, Swype will include numerical values among its suggestions. If you enter str it will suggest $54, for example.

The other headline update is phrase prediction: Swype can now predict two-word phrases. The example they provide in the Play Store changelog is if you type “How,” Swype may now predict “are you” as the next two words you might want to add. Apple’s iOS can already do this while the default keyboard on Android can only do one next-word prediction so it’s a nice addition to have. Head over the Play Store to read the changelog and make sure you’re updated.

For those who don’t know, Swype Keyboard is an alternative keyboard available for the major mobile platforms including Android and iOS which aims to take the frustration out of pecking at software-based keyboards on glass smartphone screens. As the name suggests, rather than typing on your phone’s keyboard in the traditional sense — lifting up your thumb between each key press — you slide your finger across the keyboard to the (approximate) location of each key and Swype determines the word you’re spelling. Hardcore users can customize their experience by changing things like the height of the keyboard or by splitting the keyboard in half and using two thumbs for increased typing speed.