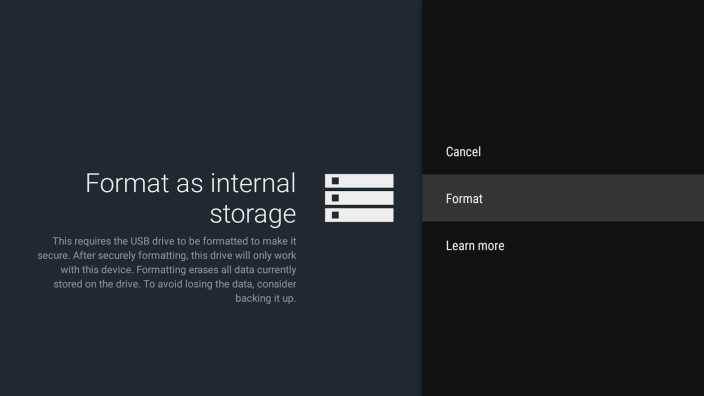 We’ve already done a roundup of the core changes coming in the next big release of Android, simply called “M,” so you should check that out. But we haven’t yet covered what additions and changes Android M brings to Google’s Internet TV platform, Android TV.

More interestingly, however, is that any Android TV developer will be able to create their own channels, or continuous feeds of programming that will live side by side traditional TV channels. I could see this being useful for new upstart content networks like Vessel which partners with YouTube creators to give paid subscribers access to new content before it hits the creators’ YouTube channels.

Android M also brings to Android TV the ability to use external USB hard drives and USB sticks as internal storage (the image at the top is from Google employee Sascha Prüter), which up until today was really only possible on the recently launched NVIDIA Shield Android TV. Where in the past you could only use external storage for storing and accessing files, primarily video content, by formatting your drive as “internal” storage you’ll be able to also store app and app data, essentially expanding your Android TV’s internal storage, in a sense.

The last major change coming with Android M for these set-top boxes is A2DP Bluetooth support, a standard with wireless headphones and speakers. This is a nice addition because it means you’ll be able to connect Bluetooth-enabled headphones to your Android TV and watch content without disturbing others nearby. It will not, however, allow you to send content to the Android TV over Bluetooth, apparently – for that you still need to use Google’s Cast technology supported in most major video apps for Android smartphones.