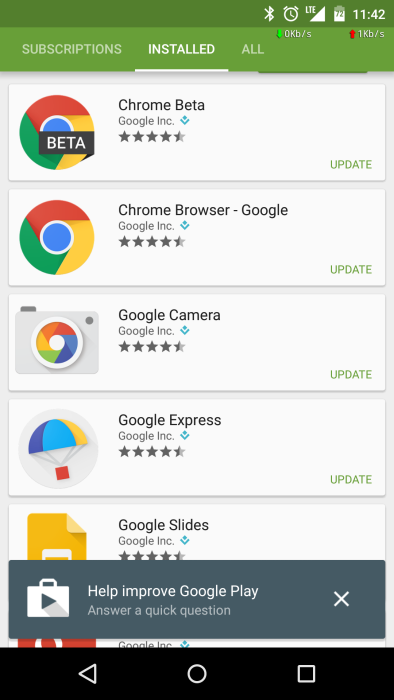 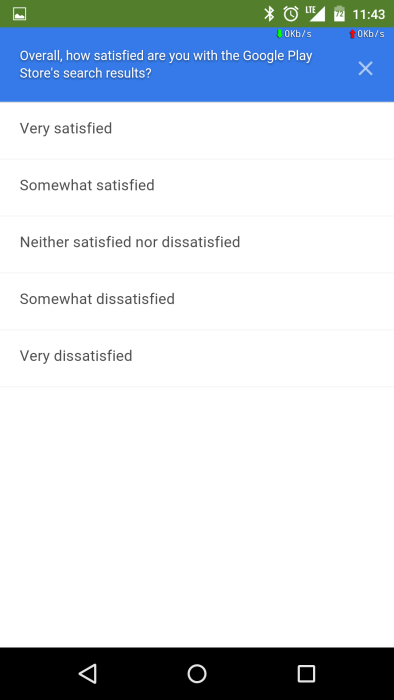 Google already has an application where it collects responses to survey questions from its large community of users called Google Reward Opinions – and it even rewards users of the app for their responses in the form of Play Store credit in small denominations ranging from $0.10-$0.80 – but it seems to want feedback from users closer to the time of their Play Store experiences.

As it frequently happens, one keen-eyed Redditor noticed the above feedback call-to-action in the app today. We haven’t ever seen these in the app before, and haven’t been able to find any other mentions of it around the web. The user says that there was no reward after answering the simple satisfied to dissatisfied question like there would be in the dedicated Reward Opinions app from company – you’ll have to just hold out hope that you’ll be rewarded down the road in the form of a better Google Play experience.

It makes sense, however, to present users with these simple feedback questions while they’re using an app, as experiences with the app will presumably be more fresh on the mind as you’re actually using them. Back in early May the Chrome team launched a totally opt-in extension that periodically solicits for feedback when something unusual or unintended occurs in the browsing experience, and this reminds me a bit of that.

In particular the question asked of the Redditor, pictured above, at least gives us hope that Google is thinking about the quality of its search results in the Play Store, a common gripe amongst passionate fans and something you’d think would be better from a company who’s financial success is supported by its search business. Although, the company did discuss plans at its I/O conference to roll-out improved search in the form of better organization and surfacing of quality apps when users search with generic terms like “cooking” or “shopping.” We’re crossing our fingers that these surveys will lead to Google bringing autocomplete and spellcheck to Google Play search.

Have you seen these surveys in Google Play or elsewhere (other than Reward Opinions)? Let us know!