The BlackBerry PRIV has officially been on the market now for a couple of months, and is seen by many as the device which will make or break the Canadian smartphone-maker. While the first ever Android-powered BlackBerry has been available from AT&T and Verizon for a little while now, the US’ #3 carrier T-Mobile, is yet to start selling the device through its own official retail chains. That could all be about to change according to a leaked roadmap obtained by PhoneArena. 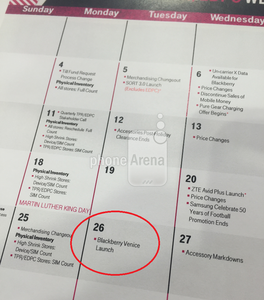 The calendar details retail launches and events T-Mobile staff need to be aware of and prepare for. The January roadmap clearly indicates that employees should be preparing for a ‘BlackBerry Venice Launch’ on January 26.

Having dealt with leaks from T-Mobile like this a lot in the past, I can say it certainly looks like the genuine article, and there’s little to suggest it’s not legitimate. But with every leak comes the usual note of caution. Plans can — and often do — change. T-Mo has been known to change things up because of leaks, or because they’re simply not ready when they thought they would be.

With T-Mobile’s recent comments on BlackBerry, it’s clear the company has a lot of time for the former smartphone giant and plans to offer its products. Following a very public fallout, the two firms finally made up when the carrier officially started selling the BlackBerry Classic a few months back. Now it seems T-Mo is willing to offer more of the manufacturer’s wares on its store shelves.