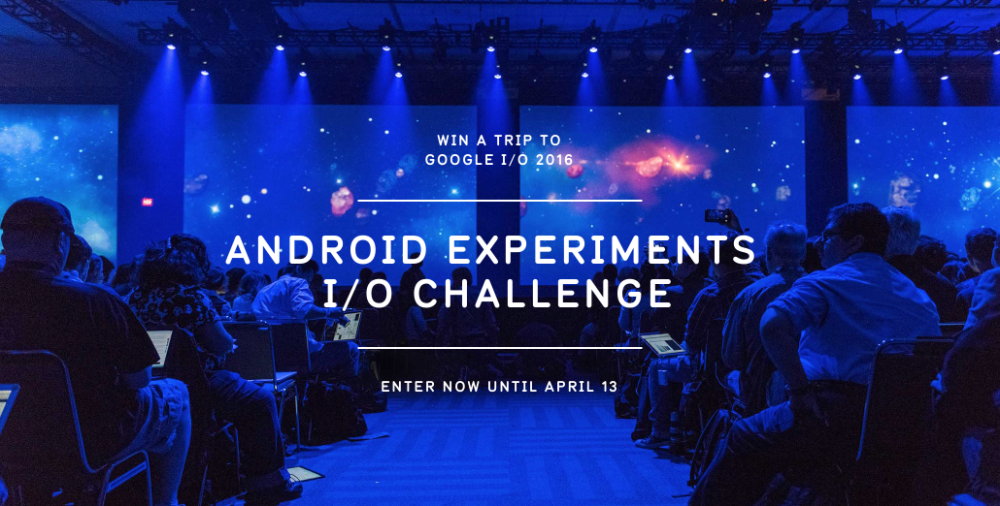 If you’re a developer and either 1) didn’t have the cash to put down for a trip to Mountain View or 2) didn’t get very lucky in the lottery, then you might want to listen up. There may not be a fun Easter egg hunt like in years past, but this is still a great opportunity to win a trip to I/O — and it actually requires a bit of skill. In the Android Experiments I/O Challenge, Google is offering developers who submit their apps a chance to win one of three trips to I/O or one of five Nexus 6Ps…

Join us in a celebration of creativity and code. Enter your experiment and win a chance for it (and you) to go to Google I/O 2016!

Submit your Android Experiment between now and April 13th. Three winners will win a trip to this year’s Google I/O. Five runner-ups will get the new Nexus 6P.

So what’s an Android Experiment, you ask? It’s a showcase of apps that Google launched eight months ago to put on display the best of the most creative Android development minds. Google said that eligible apps for the showcase needed to “explore how we interact with our devices, in small and big ways,” when the Experiments site launched last year, but it has gone into further detail of what kinds of apps specifically qualify for entry into this giveaway:

It’s a project that utilizes the unique capabilities of the Android platform in an innovative way. Here are a few suggestions:

When you go to submit your app, you’ll need to supply a list of technologies that it uses, a link to an open source GitHub repo, a Play Store link, and of course a title and description. You’ll also want to make sure it runs on Android 4.4 (KitKat) and higher. The contest begins now, and ends at 9:59:59 A.M. PT on April 13th, 2016.  Three will win a trip to this year’s Google I/O, including a huge $5,000 stipend for travel and lodging, and five runner-ups will get the new Nexus 6P.

Google says that the contest is open anywhere in the world, excluding “Quebec, Crimea, Cuba, Iran, Syria, North Korea, Sudan, and where prohibited by law.”