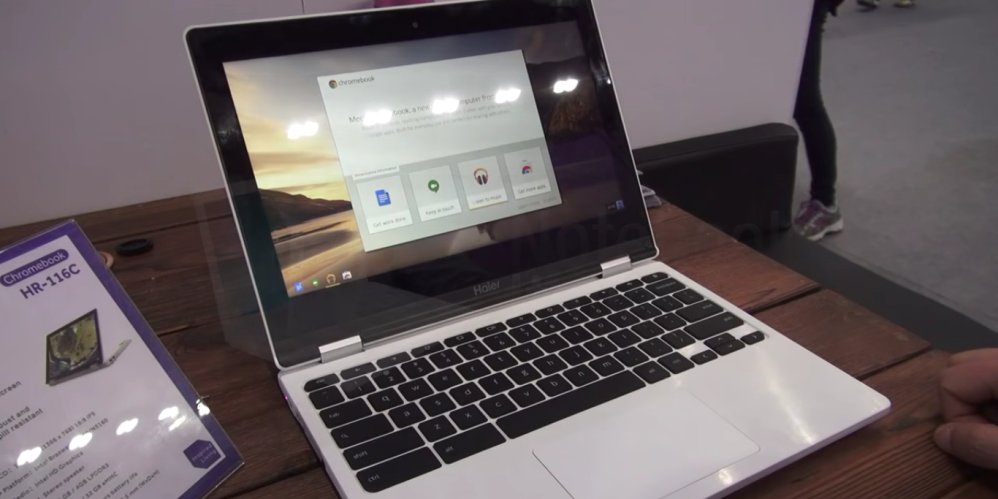 Chinese manufacturer Haier is most known for selling an affordable $149 Chromebook last year. Announced at Intel’s IDF conference (via Notebook Italia), the company is following up with a convertible Chromebook HR-116C that runs Intel’s latest Braswell chip.

The device has a rather unassuming look with a white polycarbonate body weighing 3.5 pounds. While intended for a general consumer audience, this Chromebook is also aimed at schools and features a stiffened chassis and 10 hour battery. Interestingly, the 40Wh battery can be easily replaced by removing flaps and unscrewing four screws at the bottom.

As a convertible, the display can tilt up to 360 degrees and can also be used as a tablet or in a tent mode for presentations. The Haier uses a rather standard 11.6-inch 1366 x 768 IPS display with a completely black front and 720p camera. Ports-wise, it has a whopping three USB 3.0 parts, micro SD card slot, HDMI, and an audio jack. Like other recent Chromebooks, it also features stereo speakers.

Along with Acer’s MacBook Air-like Chromebook 14, the Haier is one of the first devices to run Intel’s new low-power Braswell chip. Possible configurations include an Intel Celeron N3060 or N3160, 2-4GB of RAM, and 16-32GB of storage. Other specs include dual-band 802.11ac Wi-Fi and Bluetooth 4.0.

Price has yet to be announced, but expect the device to hit the US in June.