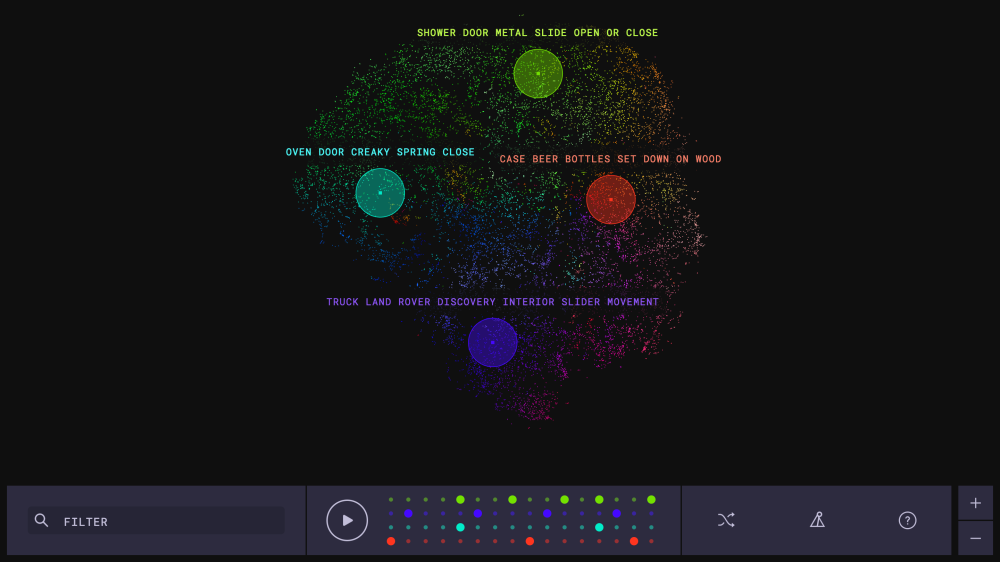 The beautiful thing about artificial intelligence is that due to its relatively back-end nature its applications seem to be virtually endless.

Today is music’s lucky day, as sound is the latest area which has undergone Google‘s AI surgery in its recent wave of “experiments”…

With a little help from machine learning-enabled algorithms, over the past week alone we’ve seen AI making incursions in the firm’s cloud infrastructure, picture-quality enhancing software, and even quick handmade sketches to teach computers how to recognize doodles.

And now Google wants you to essentially create beats with sounds catalogued by AI. The “Infinite Drum Machine”, as the company calls it, is another piece of ML-fueled software that “uses machine learning to organize thousands of everyday sounds”.

Thanks to a complex machine learning algorithm called t-SNE (or “t-distributed stochastic neighbor embedding”, if that helps), the computer was able to autonomously catalogue a vast number of different sounds and put them together in a simple and yet extremely Google-y and fancy way, on the website accessible here.

We as humans can easily distinguish between the sound of a ballpoint pen and a pencil scribbling on paper, while intuitively understanding its subtlety, but also, of course, realize how both of them sound extremely different from, say, a bell ringing. And that, says Google Creative Lab’s coder and musician Yotam Mann, “is the kind of thing machine learning is really good at”.

The team behind the experiment essentially fed the machine with thousands of different sound snippets, without actually tagging or cataloguing them in any way; they really wanted the computer to listen to those sounds, and put them in an order that made sense from an acoustic standpoint.

The final t-SNE, which more or less looks like a multi-coloured galaxy of some sort, is nothing other than a very complex and 2D-rendered image of the combined “fingerprints” the computer has scanned for each sound. It places “neighbourhoods” of sounds with jingles close to one another, so that you can easily hover over them and listen for yourself.

But of course, this being Google, there is a fun facet; select a few of these sounds and place them in the bar below, hit play and enjoy your ready-made beat on loop. Just bear in mind — it’s pretty addictive. If you’re interested, you can also get the code at g.co/aiexperiment, and watch the video below.