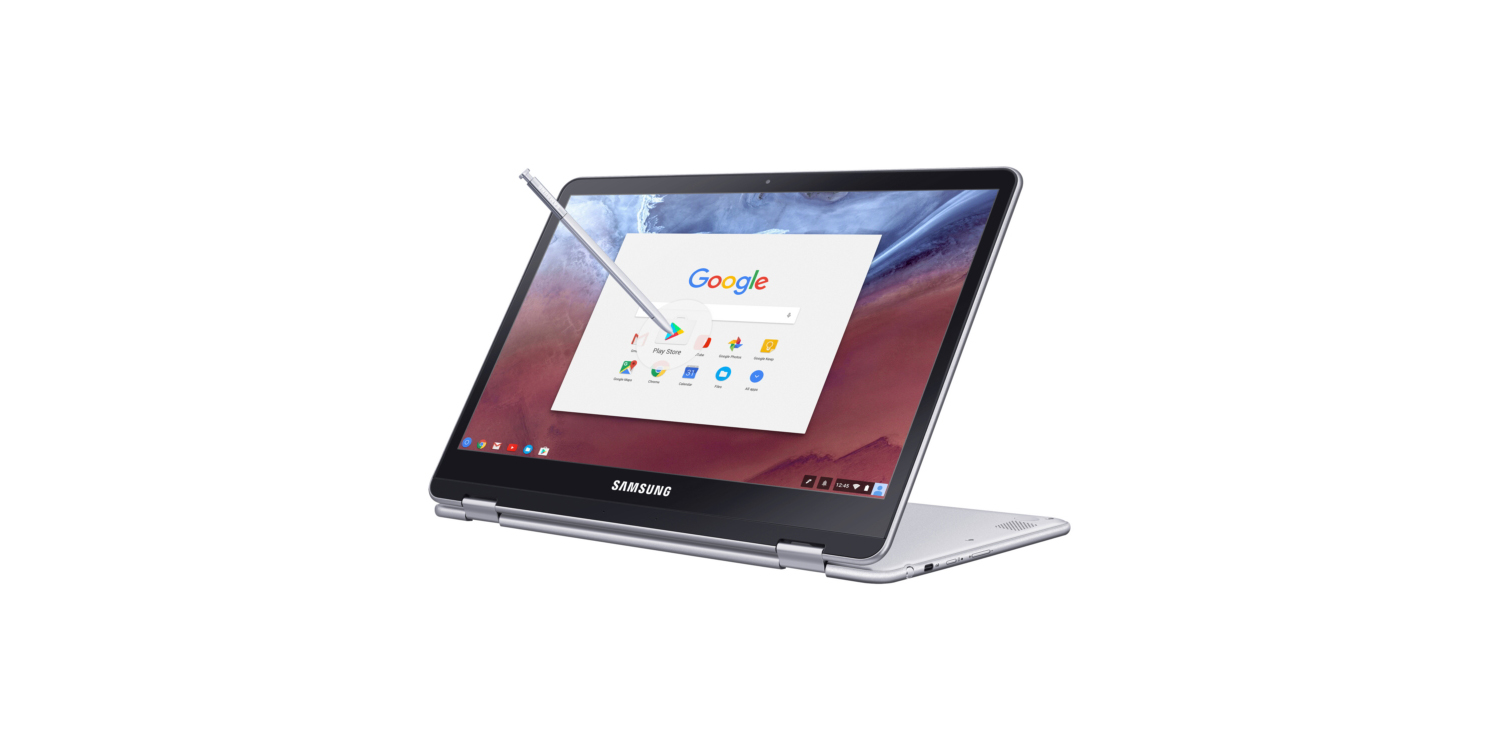 Today at CES 2017, Samsung unveiled its long-awaited Chromebook Pro alongside the previously unheard of Samsung Chromebook Plus. Both Chromebooks are designed specifically with Google Play in mind, as being the first Chromebooks ever with support for a stylus.

Samsung’s Chromebook Pro and Chromebook Plus both feature a 12.5-inch QuadHD 2400×1600 display with Gorilla Glass 3, as well as two USB-C ports on either side of the machine for both charging and data transfer. The display rotates 360-degrees for use as a tablet as well.

The Chromebook Pro and Plus also feature a built-in stylus which can be used in Samsung’s ArtCanvas drawing app, or Google’s built-in Keep app for notetaking following a recent update. The stylus also slides into the Chromebook to keep it secure.

Both Chromebooks feature 4GB of RAM, 32GB of storage, and offer up to 8 hours of battery life. Samsung also offers an “enhanced battery life extender” to add power on the go. Both also feature the same design, but differ when it comes to processing power. The base model Chromebook Plus offers an ARM chipset while the Chromebook Pro packs the much more powerful Intel Core m3 processor.

Pricing on the Chromebook Plus starts at $449 and will go on sale from major outlets like Best Buy, Amazon, Newegg, and more starting in February. The Chromebook Pro, on the other hand, will go on sale starting this Spring. Both machines will ship with the Google Play Store installed out of the box. Pre-orders are open now on Samsung’s store.

“Since launching our first Chromebook over five years ago, we have continued to improve the product, developing a computer that not only fits into consumers’ lifestyles, but makes their lives easier, more mobile and more productive,” said Alanna Cotton, vice president of product marketing at Samsung Electronics America. “With the Chromebook Plus and Pro, we’re partnering with Google to pair a sleek design with supreme flexibility, encouraging users to experience more with Google Play and Android apps, while continuing to provide simplicity, top-rated security and shareability inherent in Chromebooks.”

The Chromebook Plus and Pro are designed to be flexible – allowing the user to transform the Chromebook on demand. It is built with a 360-degree rotating touchscreen performing both as a notebook, and an ultra-mobile premium tablet.

For the first time in the Chromebook lineup the Chromebook Plus and Pro come with a built-in pen, which is embedded on the side of the device for secure storage and easy access. The pen takes convenience to another level with tablet-like benefits, such as the ability to effortlessly take notes and capture on-screen content. The pen is ready to use out of the box with pre-installed Google Keep for notetaking and Samsung ArtCanvas for drawing. The newly developed pen has a 0.7mm pen tip and pressure sensitivity for precise screen capturing.

With a sleek, lightweight design, the Chromebook Plus and Pro is a computer people will be proud to own. The high-quality hardware is slim, designed to fit right into consumers’ bags, so it’s easy to carry wherever the day takes them. Additionally, an integrated full-size keyboard and trackpad allows users to write and play from anywhere.

The new Chromebook isn’t just a laptop, or tablet – it’s a connection to a world of experience including apps, games and media, all through the Google Play Store. Delivering a stunning, immersive Quad HD 2400×1600 resolution display made of durable Gorilla Glass 3, with a 3:2 aspect ratio– users can game, work or binge-watch on Samsung’s best Chromebook screen.

The Chromebook Plus and Pro have upgraded its ports, and now includes two USB-C ports for enhanced connectivity and 4k video streaming, producing high quality video and gaming from the Chromebook on connected 4k displays.

The Chromebook Plus and Pro are for the user that wants to do more, create more and get more done all while staying connected. The new Chromebooks deliver a powerful multitasking multi-window experience allowing users to browse on Chrome, work in Google Drive and chat easily with friends on Google Hangouts.

The Chromebook Plus and Chromebook Pro also allows users the ability to access apps, work on documents or listen to a playlist while offline. Additionally, traditional Chromebook features like built-in anti-virus and automatic updates remain.

The new Chromebooks have 4GB of RAM and 32GB of storage* and feature batteries that last up to 8 hours**, as well as an enhanced battery life extender to lengthen productivity time. Samsung Chromebook Plus will feature an ARM processor starting at $449 and will be available at major retailers, including Best Buy, in February. The Chromebook Pro will be powered by an Intel® Core™ m3 processor, designed for fast, responsive performance and will be available later this Spring. Both devices will come with the Google Play Store (Beta) pre-installed.

Samsung will debut Chromebook Plus and Chromebook Pro at CES 2017’s regular exhibition hours, from January 5-8 at the Booth #15006, in LVCC, Level 1, Central Hall.