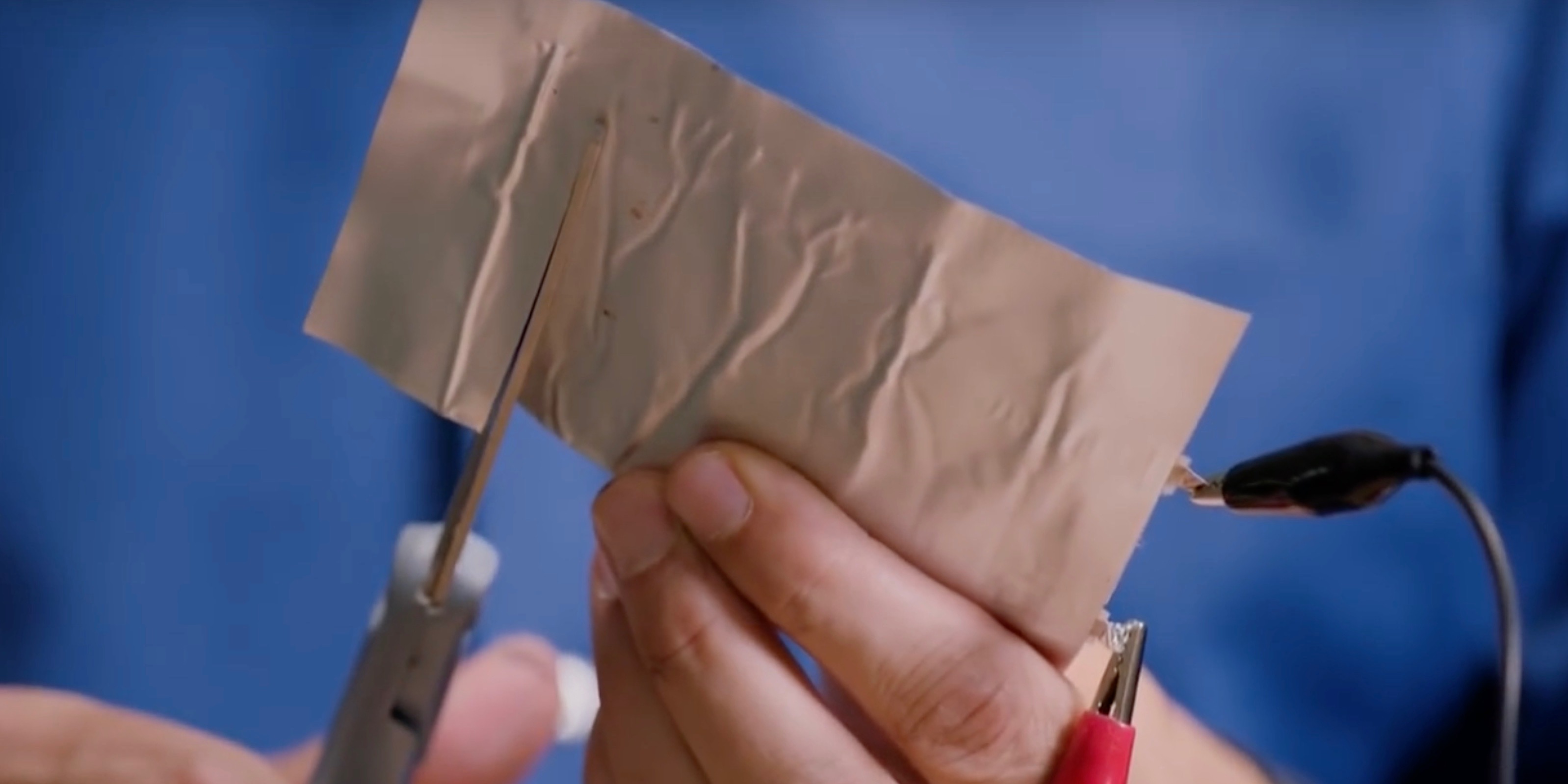 In a new NOVA documentary episode that recently aired on PBS, David Pogue hosts and checks out a next generation battery invented by Mike Zimmerman that won’t explode like the Samsung Note 7 (or create a thermal event) even when cut or punctured. The Search for the Super Battery episode is an hour-long look at “the hidden world of energy storage and how it holds the keys to a greener future.”

With the lithium-ion waste fire at Samsung’s SDI battery factory this week, it’s clear the evolution of batteries should not only focus on capacity, function and end-user safety, but should also consider the employees that produce batteries and the waste’s environmental impacts…

The full episode features multiple segments ranging from ‘The Power in Lithium,’ ‘Cars of the Future,’ ‘Safer Batteries,’ and ‘Renewable Energy.’ Pogue tests out the safety of the slim new battery created by Tufts University professor and materials scientist, Mike Zimmerman in the ‘Safer Batteries’ segment.

Amazingly, not only is the battery safe to handle as he cuts it, it also continues to work. In another example in the full episode, Pogue stabs one of the new batteries with a screwdriver multiple times. This battery is hooked up to an iPad (Zimmerman removed the iPad’s internal battery) and it continues to power the device.

We reported last month about a Stanford team that created a sort of ‘battery fire extinguisher.’ While very impressive, this solution doesn’t prevent the possibility of a thermal event. Zimmerman, the CEO of Ionic Materials has taken things a step further by creating his impressive batteries by replacing the liquid electrolyte and the separator with a special plastic polymer which creates a completely solid battery. This removes the combustible nature altogether.

While the liquid electrolyte in traditional lithium-ion batteries is flammable, Zimmerman’s plastic electrolyte is flame retardant. Interestingly, even though the new electrolyte used in this new battery is solid, it still allows ions to pass through it as well or better than the liquid version.

Another impressive aspect of these batteries is that the cost could be less than current batteries. This is because the plastic electrolyte used is manufactured with the same process that trash bags and other high volume plastics use. The cherry on top is that this new plastic implementation prevents dendrites from shorting out the batteries which will allow use of a metal electrode which could double a battery’s energy density.

While this may sound too good to be true, even Zimmerman admits there are some challenges ahead. Two of the biggest he mentions are reliability testing and how a next generation battery like this will scale. He shares that for this battery to make it to market, they will need some partners who are truly committed to evolving batteries. We won’t likely see this type of battery in new Android phones this year or next, but it’s not far-fetched that in less than five years this technology could greatly enhance the vision of what smartphones can do or become.

You can watch the full episode which is really fascinating for free on PBS’ website. Mike Zimmerman was also recently interviewed on a local news station and provided more insight on this new technology. Here is the short YouTube excerpt with David Pogue featuring Zimmerman’s new battery and a clip where Pogue stabs a battery with a screwdriver: