Following this afternoon’s rollout to Mac, Windows, and Linux, the latest version of Chrome for Android has hit the stable channel. Version 61 includes several new user-facing features, including an updated Google Translate toolbar and vastly improved contextual Share menu. The bottom bar redesign also appears to be rolling out.

Visiting sites that differ from your device’s default language brings up a tool that offers users the ability to translate the page. This toolbar has been significantly redesigned in Chrome 61.

Featuring tabs, users can easily and quickly switch between the set language and their desired default one. Additionally, an overflow menu lets users quickly pick from other languages to translate to. There are also options to set translation preferences.

Meanwhile, the menu that pops up when users press and hold on a link or image is more intuitive. Especially for pictures, users are no longer presented with a long list of options. Rather, a box that is significantly more compact appears with icons for common actions. The same style applies to links, but with an image preview.

On several of our devices, version 61 also appears to enable the “Chrome Home” bottom bar redesign. Pushing all UI elements from the top of the screen to the bottom, it boosts the ease of use on larger-screened devices.

The Omnibox is located at the bottom of the screen, while there is a bottom bar for Home, Downloads, Bookmarks, and History. This interface is noticeably the older, un-rounded design.

Under-the-hood, there is a significant new API for developers. The WebShare API allows websites to call the native Android Share dialog. It currently supports the sharing of text, links, and other content through installed applications and is aimed at decreasing the use of individual service share buttons on sites.

Behavioral changes see Chrome on Android automatically expanding videos to full screen upon rotate for content that uses native controls. Similarly, a Chrome Custom Tab instead — rather than the full browser — will launch when navigating from an installed web app to a site outside the initial web app’s scope. For added security, sites will now automatically exit full screen if a JavaScript dialog opens.

Chrome 61 for Android will rollout over the coming weeks via the Play Store. 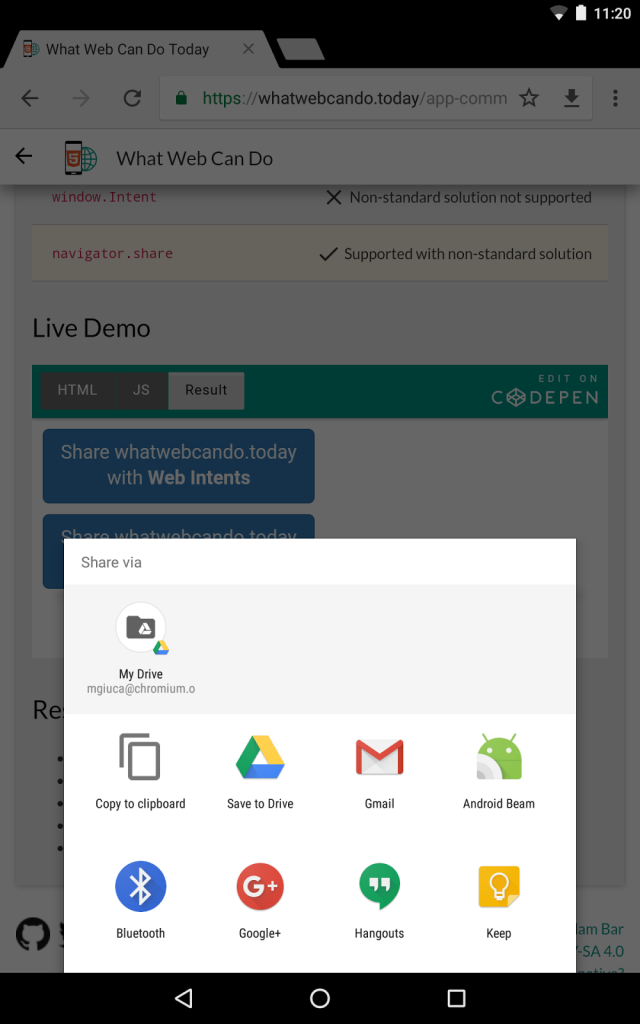