Over the past year, Google has been dealing with an accusation from the Department of Labor that its women employees are paid less than men. An investigation by the New York Times today, bolsters the U.S. Government’s claim with an analysis of pay data. Google has long denied the Labor Deparment claims and vehemently countered the Times today.

The Times‘ analysis comes from examining a shared spreadsheet created by a Googler that lists base salaries and bonuses. Since 2015, approximately 1,200 employees across six pay levels have self-volunteered their information. Comprising two percent of Google’s workforce, the NYT discovered pay discrepancies in 2017:

“At five of the six job levels, women are paid less than men. At level three, the entry level for technical positions, women make 4 percent less than men at $124,000 in salary and bonus. But it widens to 6 percent by the time employees reach midcareer status, around level five, with women earning, on average, $11,000 less than men.”

This falls in line the Department of Labor’s April accusation of Google underpaying its female employees. The U.S. demanded more salary data, but Google countered, believing the request is an overreach and would reveal private employee information. 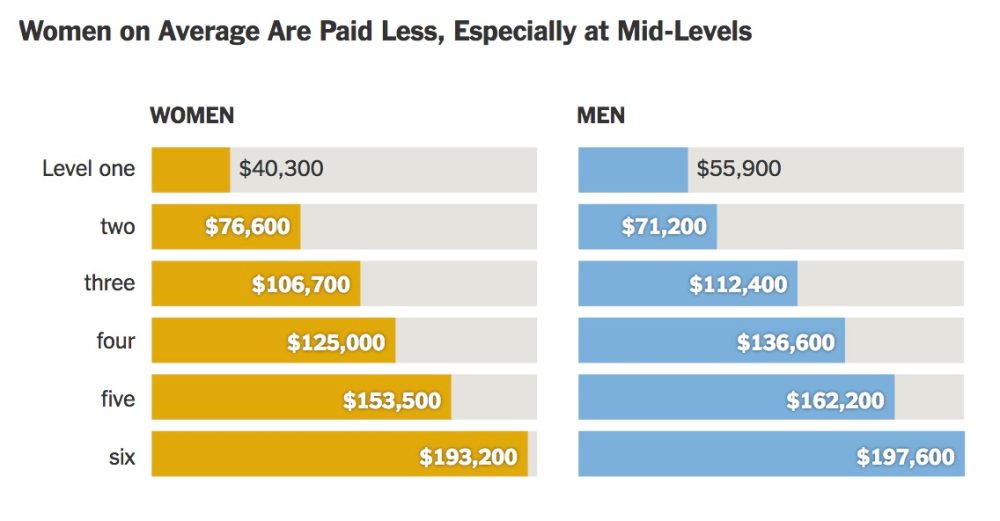 Google has long argued with the Labor Department, and today came out against the Times in a statement to Business Insider, calling its analysis “extremely flawed” due to a number of reasons, including small sample size. However, the crux of their rebuttal lies in how it did not take into account “location, role, tenure, or performance.”

Especially with location, Google argues that it does not make sense to compare the salary of an employee living in the more expensive Bay Area to one living in a different region as pay takes into account those factors.

“We do rigorous compensation analyses and when you compare like-for-like, women are paid 99.7% of what men are paid at Google.”