Back in July, RED revealed that it was working on a modular phone aimed at 3D content whose marquee feature was a holographic display. Since then, we have only seen one impression of the screen, but RED today unveiled the technology and company behind the screen and holograms.

Leia — founded in 2014 as a spin-off from HP’s labs— announced a strategic partnership with RED today to bring its lightfield “holographic” display to smartphones. The Hydrogen One touts this screen as perfect for moving viewing, interactive gaming, and mixed reality.

According to its site, the specific technology being used is known as “Lit by Leia.” This nanotechnology works in conjunction with any regular LCD panel — without the need for customization — and features a “Diffractive Lightfield Backlighting (DLB) Layer.”

Our core IP uses a nanostructured light guide plate in a standard edge-lit configuration to produce a custom lightfield illumination of the LCD front-plane.

Leia harps on the unobtrusive nature of the DLB, further noting that it is has an “ultra thin form factor” and is efficient, with “no optical waste” preserving battery life.

Functionality-wise, it can create “interactive holograms,” as well as different applications, including “privacy viewing zones.” While being used in a smartphone by RED, it can also be used in tablets, laptops, monitors, televisions, and even signage. 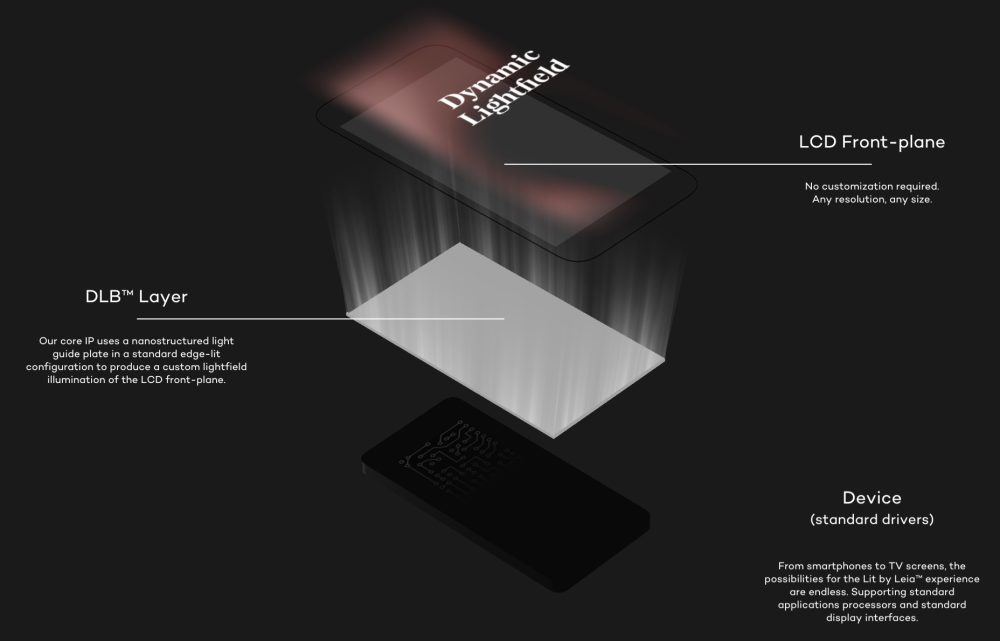 In addition to making hardware, Leia is working on content as well. Leia Loft could include movies, interactive games, apps, and mixed reality. RED’s press release noted that the Hydrogen One will reach consumers in the first half of 2018, though hopefully we will learn much more about the device before that.