After rolling out to Android, Mac, Windows, and Linux, version 67 of Chrome OS is now available. Notable features include a new “Touchable material 2.0” design for tablet devices and support for desktop Progressive Web Apps. There are also new APIs for creating VR experiences, ADB support, and the perfunctory security and bug fixes.

Progressive Web Apps are more commonly associated with mobile, but Google argues that they have a place on desktops given the continued importance of these devices in work settings. Like on Android, desktop PWAs can be “installed” alongside other apps, cache content with service workers, and feel native with windows featuring no address bars or tabs.

Desktop PWAs are now supported in Chrome OS 67 and feature all those aforementioned capabilities, as well as the ability to scale depending on the window size. Chrome for Mac and Windows will gain support in the coming releases with features like keyboard shortcuts, app icon badging, and link capturing in development.

Meanwhile, “Touchable material 2.0” is available for tablet devices. This adopts design elements seen on Chrome for Android’s “Modern Design,” with the most notable addition being a rounded, pill-shaped Omnibar and “New Tab” button. Meanwhile, better spacing and taller elements make it easier to navigate by touchscreen and tapping. Other flourishes include a rounded address bar dropdown, refined typography, and new icons.

Other touch-optimized enhancements include split screen support in tablet mode, shortcuts to shutdown or sign out when holding down the power button, and detection for Chrome devices with detachable keyboards, like the HP Chromebook X2.

Also specific to Chrome OS is support for Android Device Bridge (ADB) in developer mode and zipping files in Drive via the Files app. A new “Emoji” shortcut in the right-click menu of text fields opens the operating system’s native special symbols picker. It can be accessed by enabling the following flag: 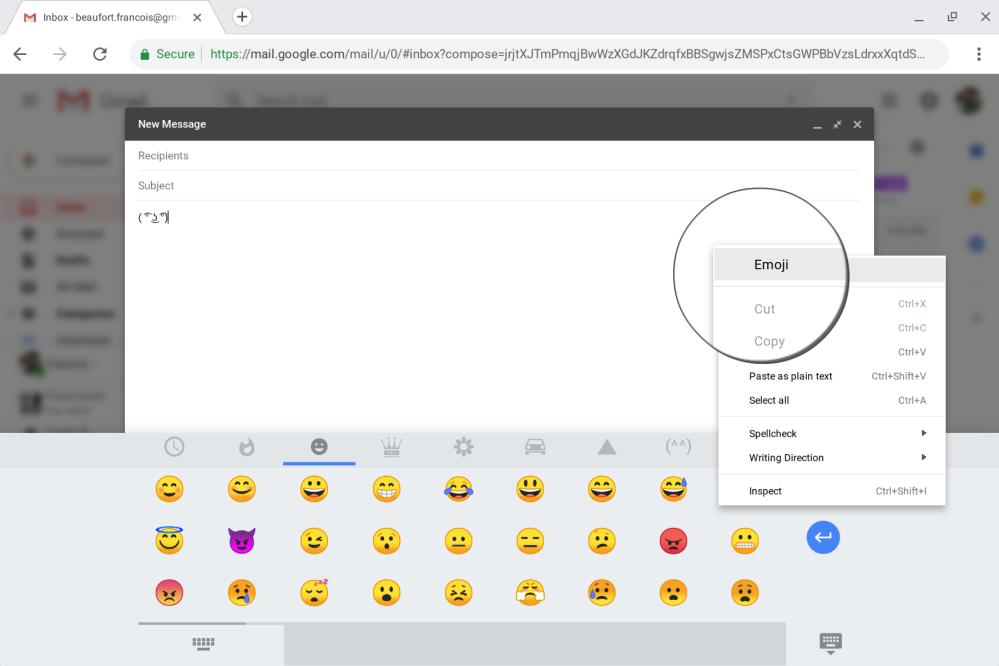 A small tweaks sees redesigned system favicons. Instead of generic gray icons for Settings and Flags, the new versions are blue, while the latter is now a beaker instead of a radioactive sign. Another change sees the navigation drawer in Settings gain a new shortcut to open the list of installed “Extensions.”

With the Generic Sensor API, websites can access (if available) a device’s accelerometer, gyroscope, orientation sensor, and motion sensor — the latter being a fusion of the first two sensors and the magnetometer for use as a virtual compass.

A Web Authentication API builds off the Credential Management API introduced with Chrome 51 in 2016 that allows websites to directly interface with a browser’s password manager and federated services like Google Smart Lock. This API adds a PublicKeyCredential that allows web apps “to create and use strong, cryptographically attested, and application-scoped credentials to strongly authenticate users.”

Chrome OS 67 will be available for all devices over the next several days.