Android Q was a big focus of Google I/O 2019’s opening keynote, but there has been a ton of other news that has come out of the rest of the conference. In case you missed anything, here are some assorted Android Q tidbits we’ve found throughout the week.

This really shouldn’t come as a surprise. After it disappeared in the first Android Q beta, Google has confirmed to TechRadar that it’s removing Android Beam from the OS starting with Q. Code commits in AOSP previously hinted strongly at this change, so again, it’s really not surprising that it won’t come back in the final Q release.

Android Beam, the NFC sharing method where you put to phones back to back to transfer photos, videos, and other files, is nowhere to be found in the ongoing Android Q beta. At Google IO, we found out that it’s not coming back, either, according to the reps we talked to who are working on Android updates.

OK this should be obvious, but just in case there was any doubt, yes, Android Q is 10.0. Google has been jumping version numbers each year, and this release is no different. It also aligns with the 10-year anniversary of Android itself, so that’s cool.

A smaller bit of Android Q news that came out of I/O week was the confirmation that Google is supporting the AV1 video codec. As Android Police points out, this new codec is the successor to VP8/VP9, and it’s developed by the Alliance for Open Media, a group of companies which Google is a leading member.

AV1 supports better compression of up to 50% compared to x.264. That means that streaming video on services using this codec might take up less data on your device. It’ll be quite some time before AV1 is widespread, but it’s good to see Android Q jumping on board.

Following up on a bit of news from earlier this year, Google confirmed that it is working on bringing electronic ID support to Android, it just might not be live in Q. VentureBeat explains that Google “wants to make sure its implementation follows cryptography practices and standardization procedures.” That makes this a bit harder to implement than you might expect.

Rene Mayrhofer, head of Android Platform Security, explains that “the mobile driving license (mDL) ISO standard hasn’t locked down yet to a sufficient extent [for us] to drop the API already into the Q platform” despite it being the standard which is farthest ahead. Apparently, the Android team may not wait for that standard to be ready, though.

Instead, very, very soon, we will launch another Jetpack compatibility library that app developers can use immediately to write such apps for various DMVs or whatever cards — in the future, maybe even travel documents, although that kind of standardization for international travel is even further out…

This hasn’t been merged with Android Q yet, so it’s not clear when it will launch.

Here’s a beta doing beta things. In Android Q beta 3, the new gestures Google has implemented break, well, a lot. One example is if you enable screen pinning and lock yourself into an app, there’s no way to then disable that app and leave to do other things. Android Police first spotted the oversight. Hopefully, Google will fix this by the final release, although it remains to be seen how with a lack of buttons.

This was mentioned during the I/O keynote, but it bears repeating. In Android Q, the OS will remind you with a notification when an app has been using your location data. While this could easily get annoying to have something like Google Maps have this notification pop-up, it could also help with apps you may not have known actually had location access. Android Police noted a user who already had the functionality appear on Android Q Beta 3. 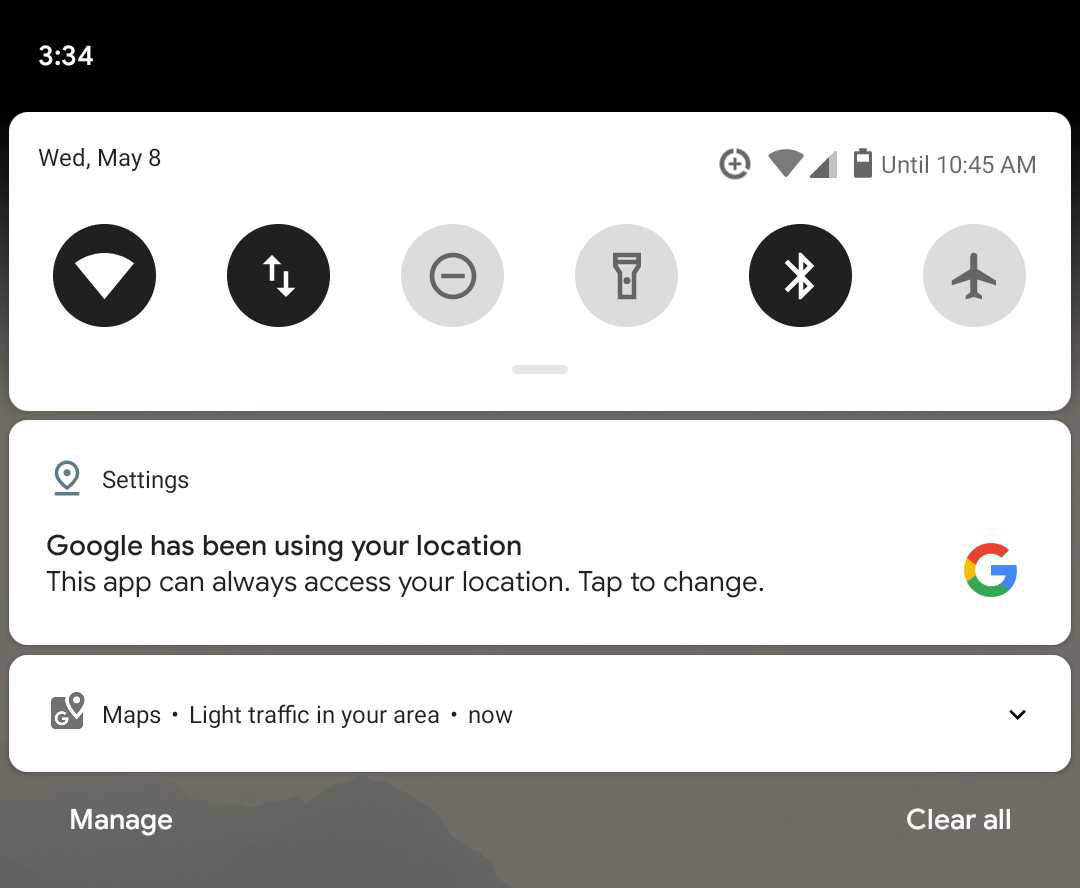 Back in Android Q Beta 2, Google revealed “Bubbles,” a new extension of notifications that has some useful functionality. What we didn’t know until now, though, is that Google is replacing the overlay API in Android starting in Q with Bubbles. XDA-Developers reports that the “SYSTEM_ALERT_WINDOW” API in Android will be deprecated in Android Q.

That API has long been used by developers to create overlays on the screen, like Facebook Messenger’s “Chat Heads” or that old favorite browser, Link Bubble. With Link Bubble, that functionality is being replaced with something that works a bit more natively to the system, but it may end up causing some headaches for certain apps since Bubbles only interact with notifications.

Google hasn’t set a specific window for when this API will be dropped, though. It could be in Android Q’s final release, but it may also end up being in a future release.

The Android team showed off something that’s in development at Google I/O this week. While there’s no final name, it’s been referred to as “Dynamic System Updates” according to Android Police. Basically, this functionality will let users, and more importantly developers, temporarily boot a completely different version of Android on their device without wiping what was previously there.

When used, this feature creates a temporary system partition on the device and uses an alternate Generic System Image. Once the process is done in Android Q, the user simply taps a notification to reboot into the new version. Google stresses that this isn’t meant for end users, but developers who need to test their apps on something that isn’t just an emulator. It even works on devices with locked bootloaders.

Developer Chris Lacy showed off the functionality on a Pixel 3 XL which was booted into an AOSP version of Android Q.

Storage encryption will be required on all Android Q devices

We’re not done with Android Q news just yet. Noted by Google’s developer blog and VentureBeat, storage encryption will be a hard requirement on Android Q devices, no exceptions. This protects user data even when it’s at rest, a pretty huge security upgrade. Encryption has been a part of Android since Marshmallow, but there were exemptions. Google explains:

Storage encryption is one of the most fundamental (and effective) security technologies, but current encryption standards require devices have cryptographic acceleration hardware. Because of this requirement many devices are not capable of using storage encryption. The launch of Adiantum changes that in the Android Q release. We announced Adiantum in February. Adiantum is designed to run efficiently without specialized hardware, and can work across everything from smart watches to internet-connected medical devices.

Our commitment to the importance of encryption continues with the Android Q release. All compatible Android devices newly launching with Android Q are required to encrypt user data, with no exceptions. This includes phones, tablets, televisions, and automotive devices. This will ensure the next generation of devices are more secure than their predecessors, and allow the next billion people coming online for the first time to do so safely.

In an effort to up the privacy and security game in Android Q, Google is also limiting background apps so they can’t launch new activities. As Android Police points out, Android Q is doing this in an effort to prevent apps from unexpectedly jumping into the foreground, but it will also break functions of beloved apps such as Tasker. This starts in beta 3 and the only workaround requires user interaction, such as tapping a notification. Users can also disable the feature in developer options.

To round up this roundup of Android Q news, let’s go over everything we’ve found so far in Android Q Beta 3. Beyond the additions of dark mode and new gestures, there’s quite a bit to this new release.