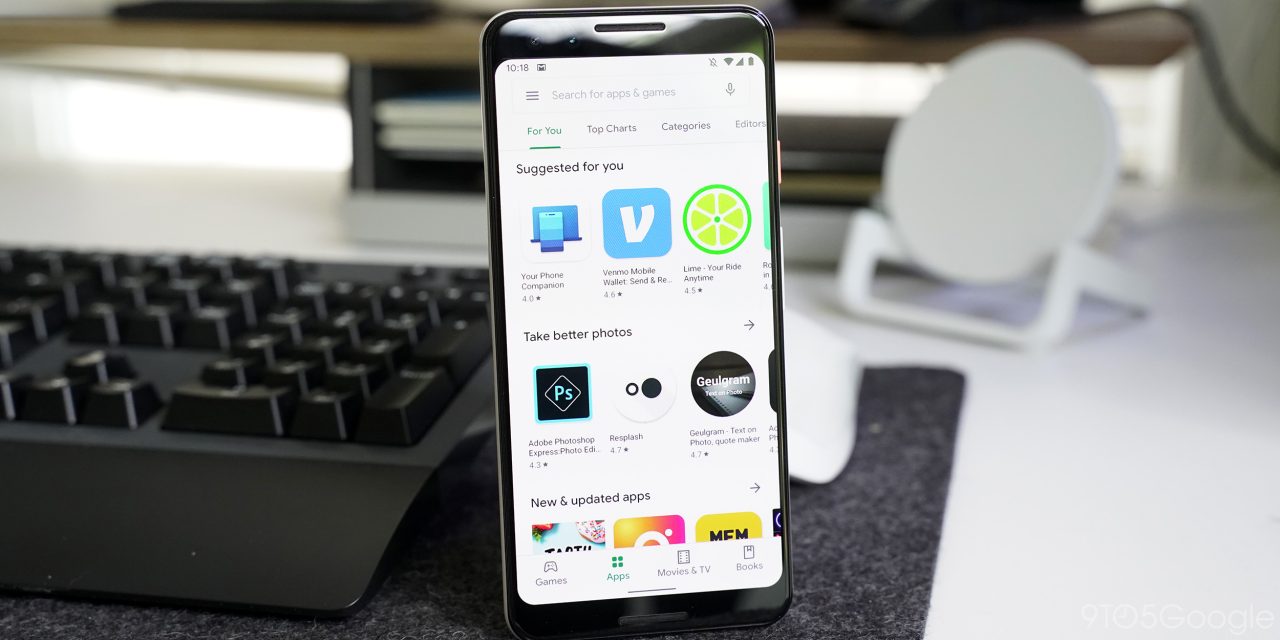 Back in April, we enabled a massive redesign of the Play Store that introduced the Google Material Theme. With the latest version of Google Play, this revamp is beginning to officially roll out on Android.

Nested tabs that were in violation of the Material guidelines have been removed thanks to a new bottom bar (more on that later). As a result, the only carousel is for store-specific pages: For You, Top Charts, Categories, Editors’ Choice, Family, and Early Access.

The feed for content below leverages the Google Sans font for section headers and replaces the “More” button with an arrow. Various Material Theme elements are used including new tab indicators, pills, and buttons with faint outlines.

Meanwhile, Play Store’s Material Theme redesign notably adopts a bottom bar. There appears to be two variations of the “Apps” icon, but the order remains Games, Apps, Movies & TV, and Books. On open, the default tab is whatever store you were last browsing, with a slick animation for icons when you switch to a section.

Music has been notably downgraded — likely reflecting the eventual deprecation of Play Music for YouTube Music — and is not a tab. It’s now located in the navigation drawer as “Browse music” with shortcuts to the Play apps, including “Open Music app,” below.

On the “My apps & games” list, the background is fully white, while line separators have been removed for a very clean look. Buttons have been updated, and there are a handful of changes to app listings. For starters, the app name is now much more prominent, while the “What’s new” section sees better spacing.

How to get the Play Store’s Material Theme redesign

As spotted on Reddit, version 15.1.24 is required to get this revamp. Once installed, you need to visit the Play Store’s App info page to clear cache and then force stop (or close from Overview) to get this redesign. This process consistently enabled the Material Theme on several of our devices.

Update 6/3: As of Monday evening, Google appears to have rolled back the Play Store Material Theme redesign. Possibly not ready for a wide launch, users that tried the above trick are losing the new look after re-opening the app. They are being reverted back to the previous iteration following an automatic update to version 15.2.23 of Google Play.

Update 6/6: Version 15.2.38 of the Play Store is rolling out and re-enables the Material Theme redesign after the previous build disabled it for users that sideloaded. We naturally received this update in the background on two Pixel devices this evening, with the new design live after the install completed.

Additionally, after sideloading the APK onto another phone, closing Google Play from the Recents multitasking view should automatically load the Material Theme.

Update 6/11: Google Play 15.3.14 is beginning to roll out and — like before — disables the Material Theme. This is surprising as most users have reported wider availability and solid performance from the redesign.

Update 6/12: Here we go again — Play Store 15.3.17 re-re-enables the Material Theme, with that version already rolling out naturally to some phones. A force stop of the app after sideloading should bring it back for all other users.