The entire launch of the Samsung Galaxy Fold has been a complete disaster from start to finish. It gets worse as now AT&T is canceling all pre-orders of the Galaxy Fold due to the delays and uncertainty surrounding the folding device.

DJ Koh and Samsung have strung us along for a little while, claiming that the release is ‘still coming‘ and then again stating the release would be scheduled ‘in the coming weeks‘, but that hasn’t stopped one of the biggest US carriers from pulling the plug on any pre-orders of the device.

This news comes not too long after Best Buy canceled all Fold pre-orders and suggests that the re-launch might not be quite as close as Samsung suggests. Especially considering that AT&T would have enough direct contact with Samsung executives to make this decision.

Any customers that had placed a pre-order for the $1,980 device with AT&T will now receive a cancellation notice via email (via Tom’s Guide). In this email, AT&T states that orders are being canceled because “Samsung delayed the release of the phone, which means we can’t ship your phone.” 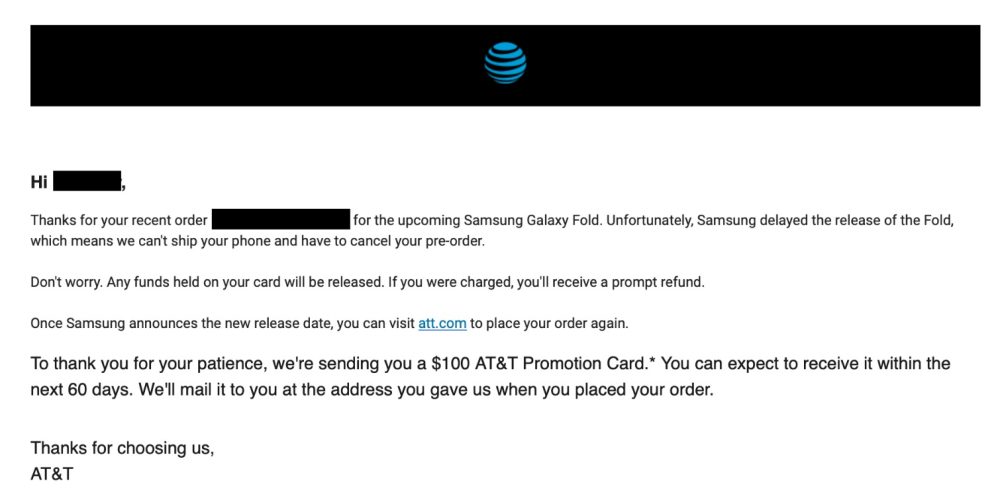 So far, so obvious. The email then goes on to offer an olive branch of a $100 AT&T gift card. Given that the Galaxy Fold was supposed to ship in April, it has been a rocky road since early reviewers found some severe issues with the display design and assembly.

Samsung does have time on their side though. With the US sanctions essentially putting the Huawei Mate X foldable phone on hold, Samsung does have the opportunity to re-group and re-launch the Galaxy Fold once the issues are resolved.

If you did originally pre-order the Samsung Galaxy Fold on AT&T, have you received your cancellation email yet? Will you pre-order again if Samsung confirms a new release date? Let us know in the comments section below.