Google’s Chrome browser has a dominant share on desktop computers, but competition is always out there. With Microsoft’s new Edge browser becoming ever more popular, Google is now using Gmail’s sign-in alerts to push those new Edge users back over to Google Chrome.

Whenever you sign in to a Google account on a new device or browser, you’ll get a sign-in alert on your email. Generally, these emails only contain information such as the location and device you’ve signed in with, but there’s a special message when users sign in via Microsoft’s new Edge browser.

Spotted by TechDows, a new email sent to Gmail users identifies that Microsoft Edge users are using that browser, and in the email, recommends they download Chrome. The message isn’t especially pushy, but it’s definitely notable since Google doesn’t do this from any other device or browser. The message does mention Google’s usual advertisement for Chrome, too, saying that it’s a “fast, simple, and secure browser built for the modern web.” You can see the email in full below. 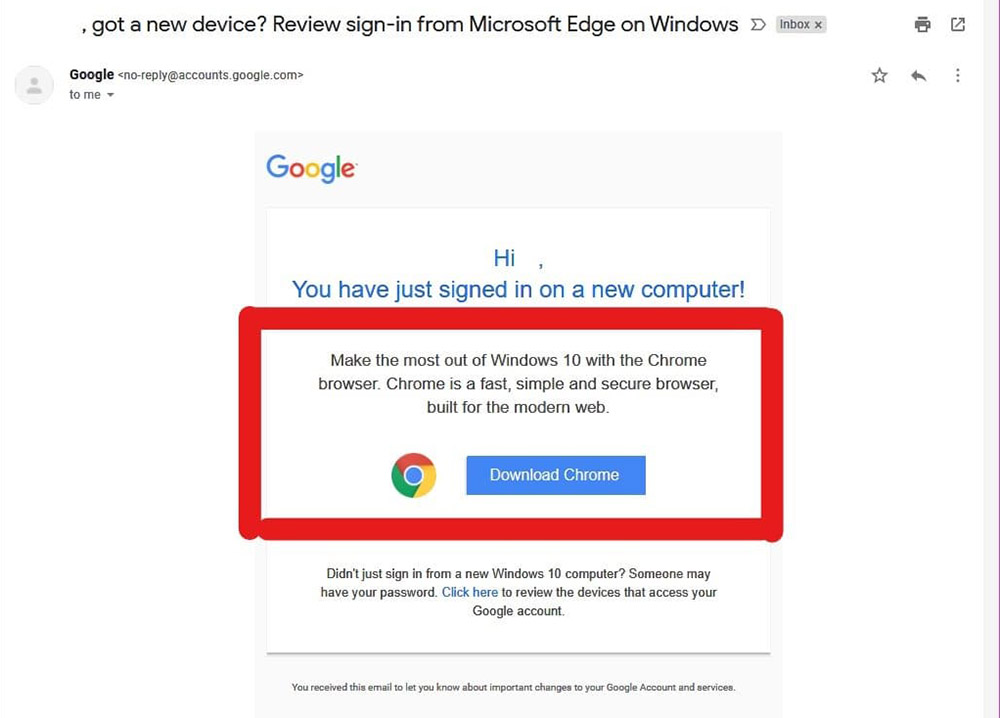 This is far from the first time Google has tried to advertise Chrome to Edge users. For example, a slew of promotional banners were spotted earlier this year where Edge users would see Google recommending Chrome whenever they used services such as Gmail, Google Docs, Translate, and several other online offerings from Google. The Chrome Web Store also had a blatant warning, too.

It shouldn’t really come as a surprise that Google is using its own products, such as Gmail, to compete with Microsoft Edge and keep users on Google’s own product. Despite Microsoft Edge’s popularity, though, Google really doesn’t have much to worry about. In fact, Chrome’s market share has only grown over the past couple of months.