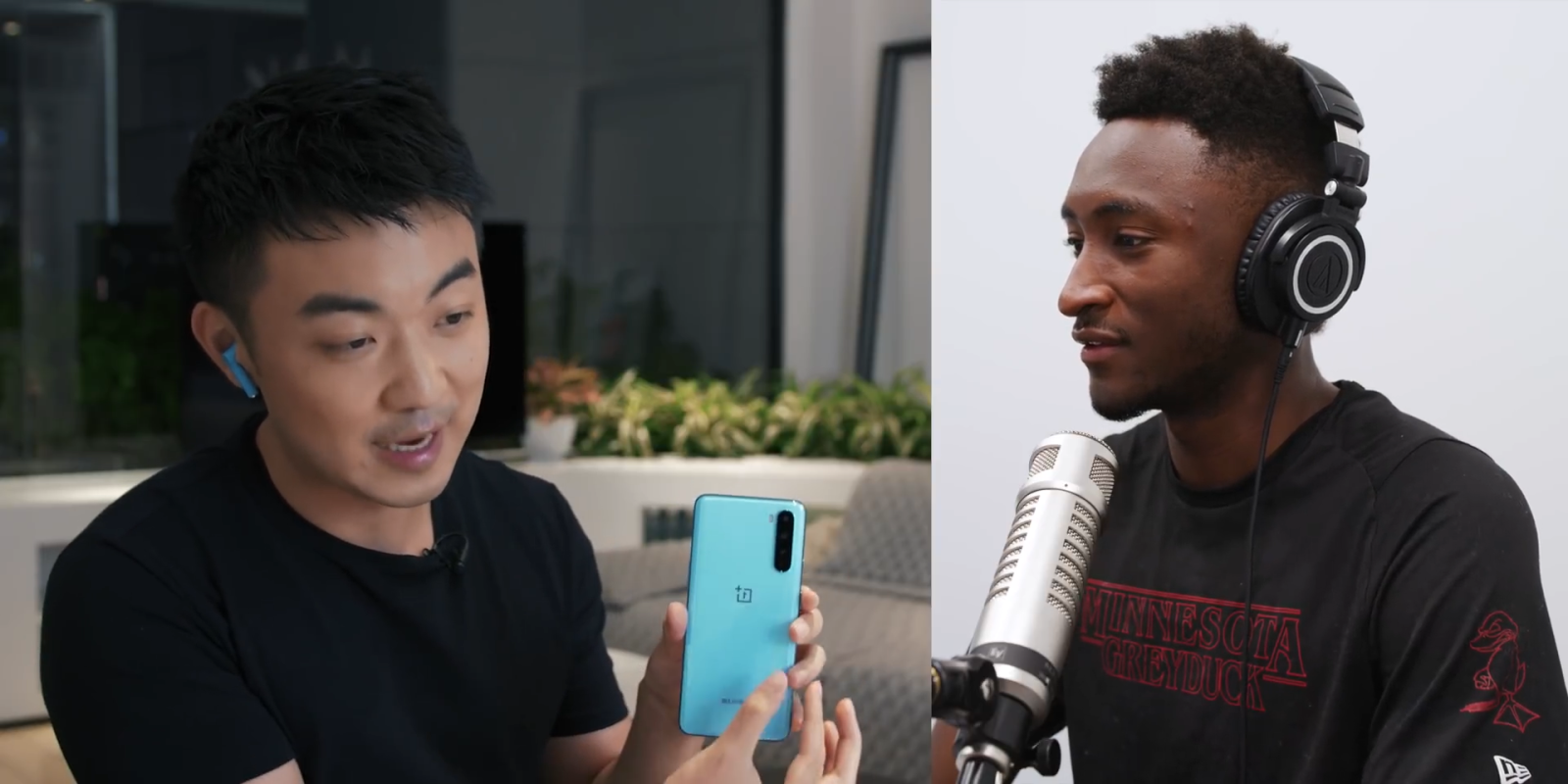 The OnePlus Nord won’t be fully revealed until an event next week, but in an interview with MKBHD this week, Carl Pei isn’t holding anything back. Here’s a first look at the OnePlus Nord design in the flesh, and the company’s truly wireless earbuds too.

With its new mid-ranger, the first that’s been released in a few years, OnePlus isn’t straying too far off the path laid by its flagships. There’s clear inspiration in OnePlus Nord taken from the design of the 8-Series such as the curved sides, single strip of cameras, and even the blue-ish color too. It feels familiar, but also new.

Pei also brought some prototypes to show off ideas OnePlus had while settling on the design of Nord. The first of those prototypes looks eerily like an iPhone, specifically the rumored iPhone 12’s design. Another has a two-tone look much like older Pixel devices. Pei says that OnePlus changed the design very late in the game, delaying the entire launch by roughly a month. “Ideally” the design would have been finished 9 months before launch, but in this case, that timeline was only 6 months.

Beyond the design, though, this interview tells us a lot about what goes on behind the scenes with making a mid-range phone. That conversation is mainly about costs, what decisions are made to hit the lower — but still unknown — price of OnePlus Nord.

The first discussion here is regarding NFC. That’s been a point of contention for OnePlus in the past. Looking back to the OnePlus 2, NFC was dropped to save costs. The actual cost of the needed parts for NFC, though, is just $4 on the Bill of Materials. Of course, that cost is heightened as it’s passed on to the consumer, but still, it’s not a huge cost.

IP certification is another area discussed, and it’s one that isn’t particularly cheap. The cost of actually “waterproofing” the phone is low, but the biggest cost according to Pei is the machinery needed to test for an IP rating. Manpower, too, increases costs for achieving this rating. Pei says it would cost around $15 per phone to add an IP rating, so the Nord does not have one, but it still has some of the seals needed to prevent water damage.

In the battery department, OnePlus has a number of things to think about outside of just the capacity. Pei explains the battery is “standard,” but the power brick has higher costs than average because much of the hardware is in the power brick, not the phone.

Pei says that when it comes to displays, AMOLED is twice as expensive as LCD, making it the biggest choice. There are also factors to decide on such as whether or not it will be curved as that adds cost, as well as high refresh rate too. Apparently, the pricing on 90Hz panels has come down, but it’s still been a high cost in OnePlus Nord’s design.

What about a headphone jack? The bill of materials cost isn’t high, but it does affect the inside of the device as we’ve heard so many times before.

Speaking of headphones, throughout the interview Carl Pei is wearing a pair of truly wireless earbuds which are undoubtedly the upcoming OnePlus Buds. Apparently, they’ll come in blue!