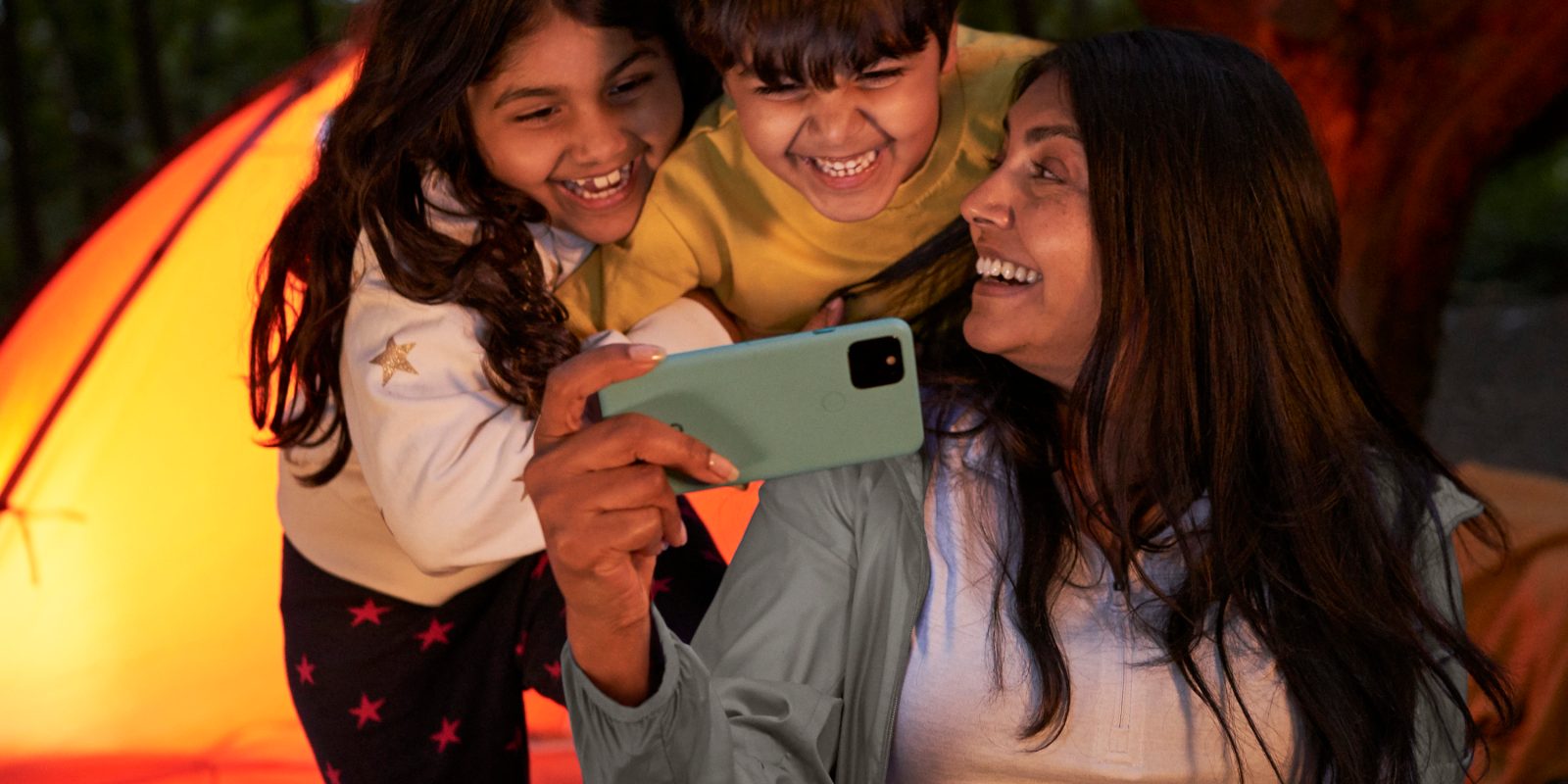 Google’s Pixel 5 won’t be available in the US for a couple more weeks, but it will start arriving on doorsteps in other countries starting tomorrow. This morning, reviews of the new Pixel 5 have hit the web and, overall, they’re very positive. Here’s what people are saying.

The design of the new Pixel 5 is strikingly similar to that of the Pixel 4a. That’s to say it has slim bezels around the display and a relatively boring rear design that doesn’t look bad, either. But for those who need to show off having the latest phone, there isn’t much to show.

There’s a bio-resin coating on the outside of the Pixel 5 which hides antenna lines and allows for wireless charging to get through the unibody aluminum build. Reviews aren’t negative when it comes to the build quality and its somewhat plasticky feel but instead mention how the aluminum internal build makes the phone feel more premium than the 4a and 4a 5G.

Android Central said that the Pixel 5 might be the best Pixel to date – a sarcastically high bar, praising the slightly unorthodox hardware in their video review and rightly recommending the “Sorta Sage” model.

Android Authority also had a lot of good things to say about the Pixel 5’s hardware, mentioning nice highlights such as the chromed “G” logo and power button, also taking a second to give Google some praise for opting for a rear fingerprint sensor.

The rounded design and squircle-shaped camera module have become staples for the Pixel series for two years running. The Chrome “G” logo near the bottom of the phone’s back side should help if you were still having trouble determining the phone’s origin.

This year, Google has brought back the rear-mounted fingerprint reader, which is a nice case of foresight on Google’s part considering the ongoing pandemic.

The display was also praised in that review, with AA calling it “nothing short of fantastic.” The 90Hz display wasn’t an issue even compared to 120Hz panels and the overall quality was great, too.

There is a punch-hole in the top left side of the Pixel 5’s display. It houses the front-facing camera. I’m personally a huge fan of punch-hole selfie shooters because they’re about the same size as a notification icon, so they don’t feel like they’re in the way.

Here’s one unfortunate point about the Pixel 5 — the speakers. Since the Pixel 2 series, speakers on Google’s phones have mostly been very good. However, since the Pixel 5 uses speakers under its display, stereo audio isn’t very good with that secondary audio source sounding weak compared to the main one as Engadget explains:

And then there’s the Pixel 5’s audio situation, which just isn’t very good. The phone’s bottom-firing speaker does most of the heavy lifting, which isn’t all that unusual — the same is true of most smartphones. Unlike the majority of phones, though, the Pixel 5’s top speaker is now built into the screen. There’s a driver under the display that actually makes that panel vibrate and transmit sound. Is it a neat solution? Heck yeah. But that also means your movies, music and podcasts can sound tinny and unbalanced. For me at least, it’s most notable when you’re watching a video or taking a video call while doing other things — you know, situations where you’d generally have the speakers going full-power while holding the phone in one hand.

So, how’s the software? Android 11 is out of the box, and as usual, it delivers a very Google experience that gets plenty of praise. There aren’t any big new features here, though. CNET praised the Pixel’s new “Hold for Me” option for phone calls and also the new Recorder features.

The devices do preview something called Hold For Me, which lets Google Assistant take your place when you’re on hold and notifies you when a real person is back on the line. It builds off the same AI technology as Call Screen and the interface is quite efficient when I used it to call a dummy line that Google setup. You still have to hover around the phone when a person takes up your call, but I’ll take any relief I can get from crappy hold music.

“Portrait Light” is perhaps on the biggest highlights for many reviewers. This feature will make its way to other Pixels later, but it seems to work really well as The Verge’s video shows off around the 8-minute mark, calling it “REALLY good.”

Also in that review, we get a good look at day-to-day performance. Dieter Bohn says that the Snapdragon 765G did lead to some sluggish opening times for bigger apps such as games, but overall the phone felt just as quick as other Pixels. The biggest noticeable impact was in the camera processing. Because there’s no Neural Core chip, processing times are longer.

XDA-Developers, of course, took a deeper dive into the performance. They found that overall smoothness beat out similarly-specced phones like the OnePlus Nord and app load times were similar if not better than competitors like the Galaxy S20. They also came to the same conclusion as others. Pixel 5 may technically have a less-capable chip, but it doesn’t actively feel like that’s the case.

The Google Pixel 5 has been balked at by the enthusiast community because of its mid-range Qualcomm Snapdragon 765G chipset. Google decided not to go for a flagship chipset this year, and many assumed that this would be at the expense of performance. Obviously, there will be a difference, but such differences have been overstated by the community. In general use, I have not seen any difference between the Pixel 5 and the many Snapdragon 865-equipped flagships I’ve used this year, and the real-world tests I performed have more than proven that.

Camera quality is why the Pixel is so well known. The same 12MP primary sensor is being used again, but it continues to be rock solid. The Verge pointed out that the colors seemed to be tweaked a bit and favored warm colors a bit more, but the same contrast-y look sticks around. Telephoto shots, of course, take a hit compared to the Pixel 4, but Super Res Zoom keeps things usable.

Joshua Vergara took a deep dive into the Pixel 5’s camera with some truly stunning shots in his video. The ultrawide camera seems to have very slight degradation compared to the main shooter, but it’s still very good. What’s more impressive is that video quality seems to be very-much improved this year. New modes for “Cinematic Stabilization” and “Locked Stabilization” look very impressive. It’s nice to see that Google is finally giving video proper attention as it’s long been one of the rough spots of the Pixel camera experience. Front-facing video, though, is still not great.

The absolute biggest issue with last year’s Pixel 4 series was battery life. It was usable on the Pixel 4 XL, but the smaller device was just awful when it comes to endurance.

It should be obvious, but with a lower-end chipset and the biggest battery ever in a Pixel — 4,080mAh — battery issues seem to be solved. PCMag ran the Pixel 5 through a full endurance test in its review, finding that while streaming HD video non-stop at full brightness, the phone lasted for just shy of 12 hours. By comparison, the Galaxy S20 FE with its 4,500 mAh battery lasted 13.5 hours at a slightly lower brightness.

What does that translate to in real life? Engadget found that the phone could last as much as a day and a half on normal usage, saying that they felt “comfortable relying on the Pixel 5 in a way I never did with the 4 or 4 XL.” That’s genuinely great to hear, and it’s also important to keep in mind that these early reviews are only including a few days of use, meaning Adaptive Battery hasn’t fully kicked in. In long-term use, Pixel 5 battery life may prove even better.

For you screen-time hunters, Android Authority pulled eight hours over the course of a day and a half and six hours over a day that included shooting 4K video and being on mobile data the majority of the day.

On an average day, the phone lasted nearly eight hours of screen-on time, equating to taking the device off the charger at 8:30 AM and seeing it die around 11 PM the next day. On a heavier day where I shot plenty of 4K video, used almost exclusively mobile data, and didn’t have service for a good portion of the day, the phone pulled closer to six hours of screen-on time. I took it off the charger at 7:30 AM that day and it had 10% left when I went to bed at 12:30 AM. Not bad.

So, the Pixel 5 gets a lot right. It fixes battery life, still has solid performance, and has a lower price at launch compared to every premium Pixel since the original. However, it also launches in a time with tough competition. At $699, the Pixel 5 has to compete with the Galaxy S20 FE, a device with better specs and even better sales. It also has to beat the OnePlus 8T that’s only $50 more and has much better performance, but also a much less impressive camera. Google also has to beat the identically-priced iPhone 12 Mini which, frankly is its biggest competition with similarly-great camera quality. The camera overall, too, just doesn’t set the Pixel apart from other flagships in 2020 as it did in previous years.

The Pixel 5 seems like an easy phone to recommend in a bubble, but the conversation gets more complicated when you look at the broader smartphone market. Had it been $100 cheaper, it might have been a better deal. But you know, 5G.

Google starts shipping Pixel 5 in the US starting on October 29 and in other countries starting tomorrow. Will you be getting one? Answer in the comments below!