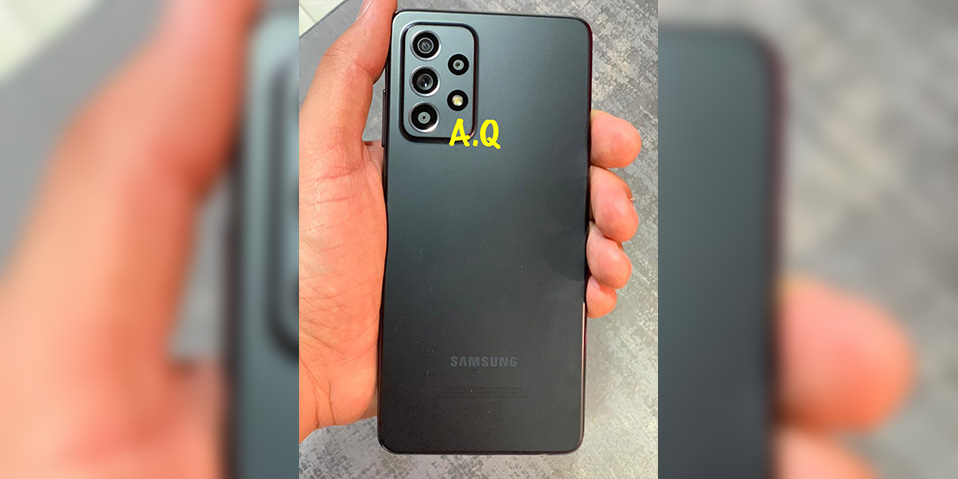 Samsung’s mid-range Galaxy A series has proved to be the company’s most successful year after year, and the next generation of the Galaxy A50 series is incoming. Over the past several days, the Galaxy A52 and Galaxy A72 have leaked en masse, with a new design and new features in tow including the potential of water resistance.

We’ve seen the Galaxy A52 a couple of times at this point, but over the weekend the phone showed up in real life with a Twitter user by the name of Ahmed Qwaider showing off a Galaxy A52 that has the same Phantom Black paint job as the Galaxy S21 Ultra, though obviously with a plastic build instead of glass, given the constraints of the price point.

The camera bump on the back of the phone is reminiscent of what’s on the Galaxy S21 series, too, but not quite identical. It’s also obvious from these hands-on photos that the Galaxy A52 will have four camera sensors.

Another marketing photo shared by the same user teases water resistance on the Galaxy A52, something that the phone’s predecessors have lacked. It’s unclear if this will come with an IP rating, though. Samsung could just be applying some basic water resistance to protect the phone, but given the fact it’s being shown in official marketing materials, it seems much more likely that Samsung will offer some proper rating and not, well, a bucket test.

Around the same time of this year, TechTalkTV also put out a few leaks of the Galaxy A72, pinpointing some of its new features and specs. These images are on the sketchy side with some inconsistent designs, but mention specs including a 90Hz display, Snapdragon 720G, and 5,000 mAh battery. There’s also mention of the “Space Zoom” camera from the S21/+ and stereo speakers, too.

Perhaps most notably, Roland Quandt spotted both the Galaxy A52 and A72 on Samsung’s own website, revealing official renders of these phones. The sheer quantity of leaks over the past couple of weeks certainly hints that an official launch is coming sooner than later.

More on Samsung Galaxy A: