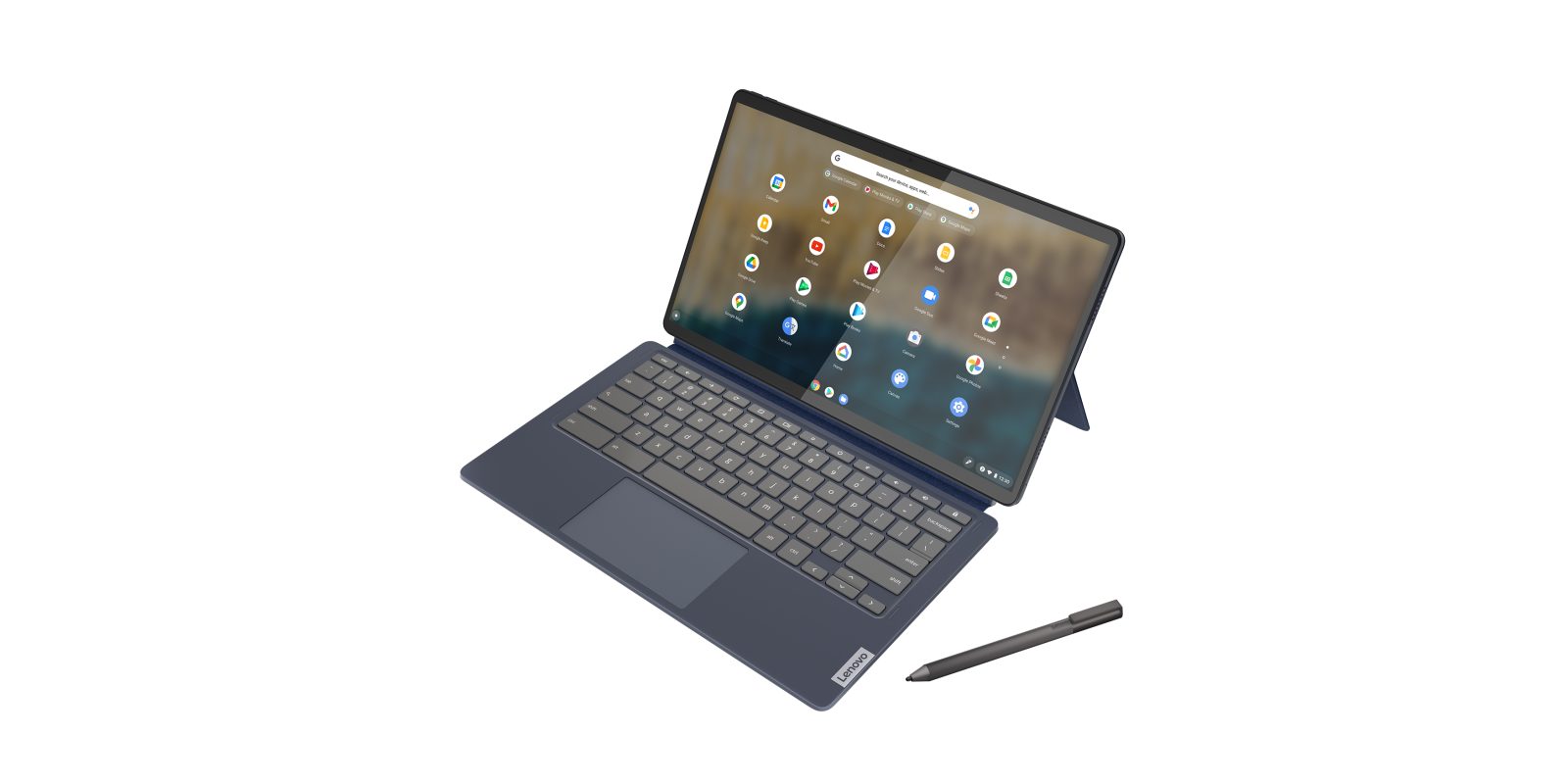 After launching one of the first mainstream Chrome OS tablets in 2020, Lenovo is building on that success with its new Lenovo Chromebook Duet 5, a premium tablet with a bigger OLED display and other upgrades.

This new Chrome OS tablet is another detachable, just like the IdeaPad Duet we loved last year, and has a clear foundation in that product. The two-tone design, magnetic kickstand, and “floppy” keyboard/trackpad attachment all have a very similar look, but there are some key improvements.

First and foremost is the display, which is a 13.3-inch, Full HD (1080p) OLED panel on this new model. That’s a big upgrade from the 10-inch 1080p LCD panel on the previous version. The display also supports the same USI stylus standard. The new official stylus also has a new mounting method on the back of the tablet, but it’s not included in the box and is still an optional accessory. Any USI stylus will work, though. Lenovo also mentions that the panel is supplied by Samsung Display and can hit 400 nits of peak brightness.

The keyboard and trackpad are included on this upgraded Duet, as is the kickstand for the back. Thanks to the bigger screen size, the keyboard has an improved layout with full-size keys and what appears to be a slightly larger trackpad.

Under the hood, this Chrome OS tablet is using Qualcomm’s Snapdragon 7c chipset, which helps deliver 15 hours of battery life. That’s paired with up to 8GB of RAM and up to 256GB of eMMC storage.

Rounding out the spec sheet, two USB-C ports are on the tablet for charging, data transfer, and display output. The tablet also weighs in at 700g, roughly 1.5lbs, which is a bit heavier than an iPad Pro. Wi-Fi 5 and Bluetooth 5.1 make up connectivity, with no LTE option at this time. There is no headphone jack. There’s a 5MP camera for video calls and an 8MP rear camera as well. Four speakers are used for audio output.

The Lenovo IdeaPad Duet 5 will launch starting in October of this year. In North America, the product will be called the “Lenovo Chromebook Duet 5.” Notably, that same branding was quietly applied to the IdeaPad Duet as well. Color options include “Abyss Blue” and “Storm Grey.”

The version of the Lenovo Chromebook Duet 5 sold at $429 in the United States will come with 4GB of RAM and 64GB of storage.