Review: KeyMander 2 Mobile is the best way to bring keyboard and mouse controls to Android/iOS games 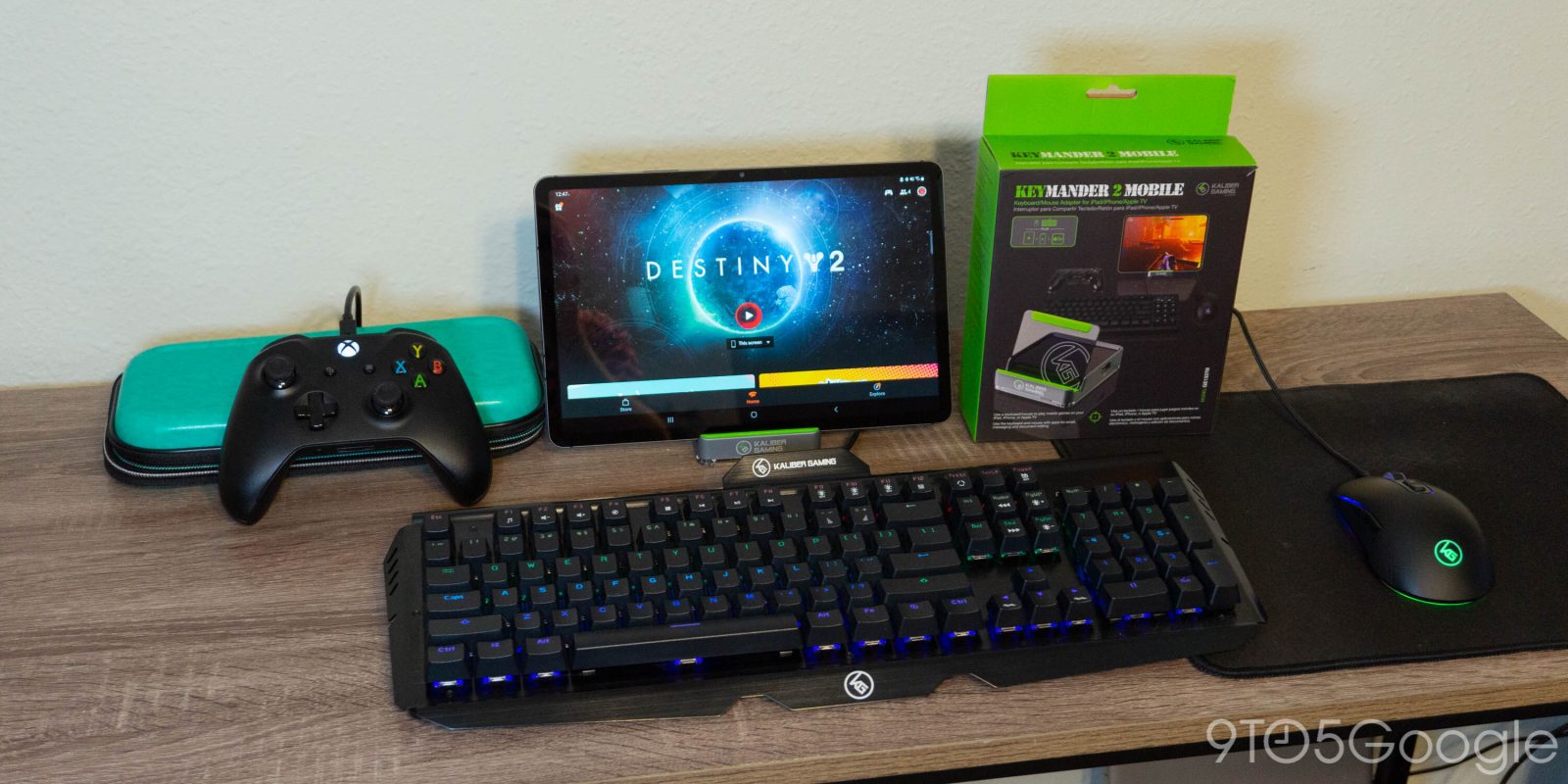 It would be no exaggeration to say that the KeyMander 2 Mobile is one of the most quirky gadgets I’ve ever put my hands on. It sounds like a simple concept – connect your favorite mouse and keyboard to your phone/tablet to play games – but unfortunately, there’s a lot more to it than that. To use the KeyMander 2 Mobile, you’ll need the following:

Let me explain. On the rear of the KeyMander 2, there are two USB ports designated for your keyboard and mouse. On the right side, there’s a port where you’ll need to connect a supported Bluetooth-equipped controller from an Xbox One or PlayStation 4. Put simply, what the KeyMander does is hijack the controller and its Bluetooth connection to send your keyboard presses and mouse movements as if they were controller inputs.

Around the back, the KeyMander 2 Mobile has a USB cable that you’ll need to plug in to a power source. This puts a hard limit on exactly how portable your mobile gaming rig can be, essentially requiring a power adapter or a battery.

Worse still, the gadget could use more power than sometimes accounts for. Case in point, I attempted to use an RGB mechanical keyboard (part of the kit that was provided to us by IOGear) with the KeyMander 2 Mobile, but found that it would immediately overwhelm the device, powering down the whole setup. One standard USB port’s worth of power just doesn’t seem to be enough.

At IOGear’s advisement, we tried their branded wall charger — a separate purchase — which managed to fix this issue. We’re not quite sure why that’s the case, as the other chargers we attempted should have been more than capable of the listed 5V 2.1A power for the KeyMander. Regardless, if you’re not using an RGB keyboard, this won’t be an issue for you.

But wait, it gets weirder. You actually need to pair the gadget to your phone/tablet multiple times. First, you’ll switch the KeyMander into a configuration mode – using a very specific key combo on the keyboard – which lets you pair to the gadget’s inner workings via the K2 Mobile app. Here, you’ll be able to get firmware updates and tweak your settings. Next, you’ll press a different key combo to get the KeyMander ready to pair through your phone’s Bluetooth settings, where it appears disguised as the controller you plugged in.

The K2 Mobile app is where the real magic happens, as you’re able to designate what each keyboard key and mouse button does on the controller along with how sensitive your mouse movement is. As you’d expect, there are multiple profiles available, making it easy to set up for multiple games. Helpfully, these settings can even be accessed and altered on a separate device. For example, I was able to adjust my keyboard layout from my phone while playing on my tablet.

One last thing I need to note is that while the KeyMander 2 Mobile has been around for a bit now, its support for Android is still relatively new. To that end, you might need to do a firmware update via the app in order for the “Android mode” to work at all. The process of getting the device connected to the app, switched into firmware update mode, and fully updated made for one of the most frustrating afternoons in recent memory.

Suffice it to say that getting set up with this gadget was no simple task, but once the initial setup is done, things are much much smoother from there.

Once you’ve gotten the KeyMander 2 Mobile set up with your device of choice, the first thing you’ll want to do is craft a profile to map keyboard presses and mouse clicks/movements to the correct inputs on a controller. You’ll need to find a bit of compromise in this stage, as not all games have exactly equivalent controls between keyboard & mouse and controller.

For example, the Hunter’s dodge in Destiny 2 is a single keypress on PC but a double tap on a controller. Similarly, games that let you switch weapons using the number keys won’t magically gain that ability, as you’re still technically using a controller.

On the plus side, though, the KeyMander app lets you refine your sensitivity settings to vary between different situations, such as moving more slowly when scoped in. The more you dig in and get comfortable with your personal equipment, the more you’ll find the unique pros and cons – as I said, a compromise.

From the options available, it seems all too clear that fans of shooter games are the target audience for the KeyMander 2 Mobile. To that end, I primarily tested it with Destiny 2 via Stadia, a game and a platform that I was all too familiar with, having played with the same keyboard and mouse natively.

I’ll fully admit that I am not a professional gamer by any stretch, but once the KeyMander was tweaked to my liking, I found myself able to get into the flow of “clicking heads” just like if I were using the mouse natively. Of course, being connected over Bluetooth, there is the unavoidable factor of Bluetooth input delay, which will vary between devices.

Despite this, I was still shocked at how well the KeyMander 2 Mobile was able to quickly translate mouse movements to on-screen action. It’s certainly not as quick as playing on a true gaming PC, but it’s definitely as close as you can get on a smartphone/tablet today.

The only trouble I really ran into was the learning curve and trial & error of putting actions where they felt most natural across my keyboard and mouse. Once you get into a flow state, the KeyMander is essentially invisible, exactly as it should be.

To that point, the KeyMander is designed to not be particularly visible on your desk. It holds your phone/tablet upright in a comfortable (though not adjustable) viewing angle. Of course, there’s only so much that can be done to hide the tiny box on your desk with four wires coming out of it in different directions.

Who is it for?

Now that we’ve established that this gadget does what it sets out to do, the real question is who should buy it. Without a doubt, the KeyMander 2 is designed with fans of (first-person) shooters in mind, given other genres don’t stand to gain as much with keyboard and mouse play.

With a retail price of $99 – almost matched by the cost of the required controller – and the mild inconvenience of supplying power to the unit, this is a solution for the gamer who take their shooters very seriously, but most frequently plays from a mobile device rather than a PC. One good example would be someone who wants to play a mobile-only shooter like Call of Duty Mobile while keeping the advantages of a full keyboard and mouse. Another example is someone who wants to use their iPad/tablet – as one of the best screens in the house – for cloud gaming, but keep their usual PC controls. I fall into the latter category.

For most people, there isn’t a world where this gadget makes any kind of sense. However, for those select few who see the grand appeal of adding PC controls to mobile games, the KeyMander 2 Mobile gets the job done surprisingly well, if a bit expensively.

You can pick up the KeyMander 2 Mobile from Amazon, B&H Photo, and Newegg. At time of writing, some retailers are offering a discount down to $79.95.