Galaxy S22 rumors: Everything you need to know about the reimagined smartphone series [Video] 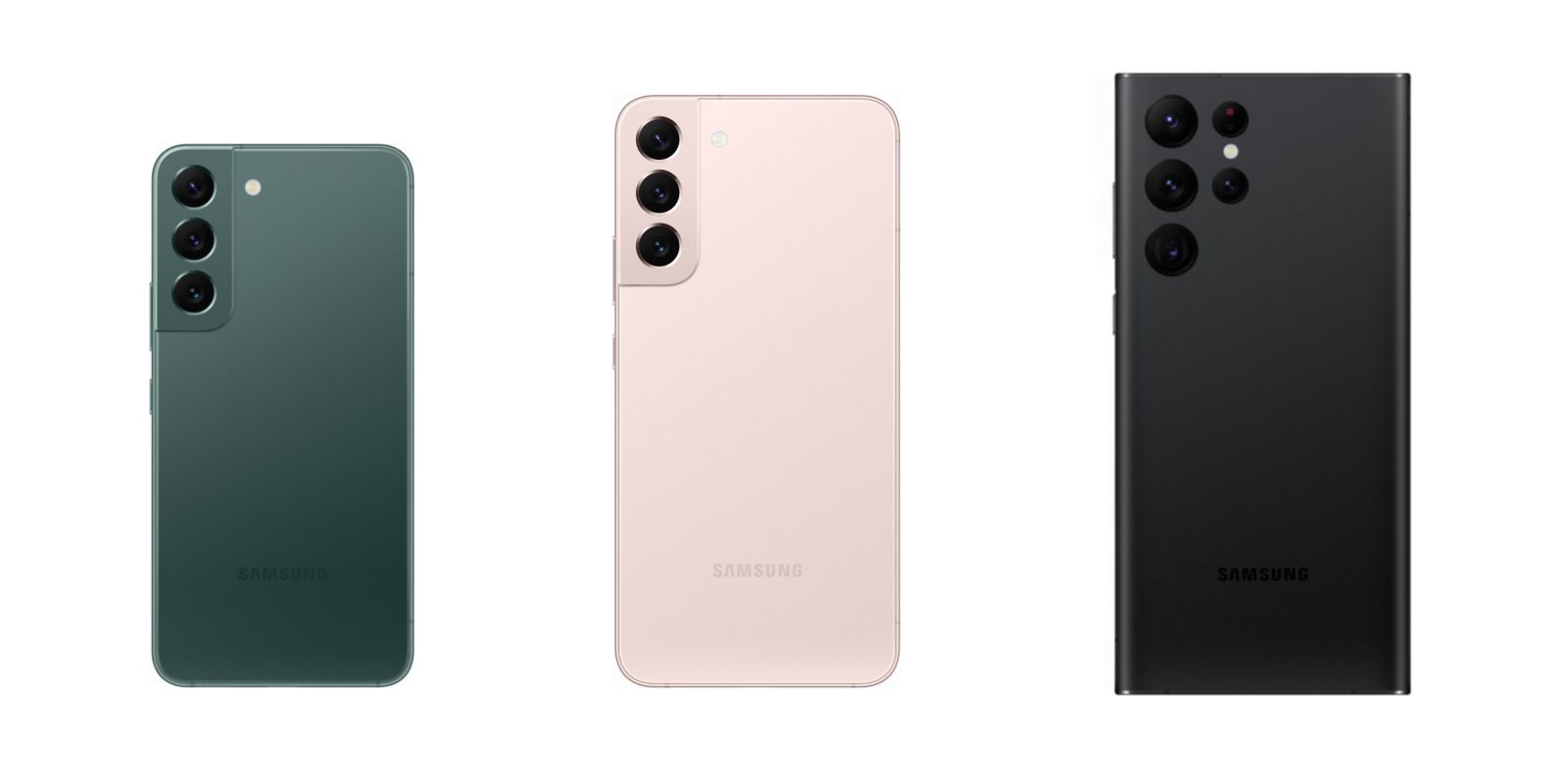 Samsung’s latest flagship smartphone lineup is right around the corner with the confirmation of Unpacked 2022. To prepare, here is every snippet, tidbit, detail, and rumor about the upcoming Galaxy S22 series.

We’ve seen a number of leaks that might pique the interest of former Galaxy Note fans, but we are expecting hardware revisions and tweaks that improve upon an already winning formula. The Galaxy S series is still the biggest-selling Android lineup globally — and Samsung will hope that continues with the S22 lineup.

Video — Galaxy S22 series: Everything we know so far

Samsung’s latest Galaxy series has even greater prominence in 2022 as the only non-foldable flagship lineup. The death of the Galaxy Note series and the emergence of the still niche Z Fold and Z Flip lines means that the Galaxy S series has to carry the flag for the Korean tech giant once again.

The Galaxy S22+ looks set to be the “middle child” of the early-2022 line and is rumored to ship with a 6.6-inch screen. As for the Galaxy S22 Ultra, this is set to be among the biggest S series flagship since inception. It will supposedly ship with a 6.8-inch display and includes a quad camera setup.

Unlike the Galaxy S20 and S21 series, we could see more substantial changes in the design between the S22, S22+, and the top-tier S22 Ultra. It appears that, according to leaked press renders, Samsung is set to take a page from the Apple playbook as the smaller duo will retain the wraparound camera seen on the Galaxy S21 and S21+. This will make it harder to differentiate, but it was an inoffensive design nonetheless.

As for the Galaxy S22 Ultra, there has been some confusion about the rear camera setup. Early renders proposed a fused layout, but subsequent dummy models and hands-on images show a setup that looks more akin to the Galaxy Note 10 series, but with no wraparound module covering each individual lens. At least from a design perspective, this certainly creates separation between the standard and ultra-premium S22 model.

The biggest design change is undoubtedly the inclusion of a fully integrated S Pen for the first time on a Galaxy S series smartphone. Last year saw the Galaxy S21 Ultra included support for a standalone S Pen accessory, but it appears that the Galaxy S and Galaxy Note lines are set for one final fusion here. This could certainly appease fans of the defunct Note series, while offering the same great experience we have come to expect from Samsung.

As for colors, the Galaxy S22 and S22+ look set to at least be made available in green, white, pink or rose gold, and black. The S22 Ultra looks set to be available in just two colors, including black and a reddish bronze option.

As is often the case, there will be a slight divergence between global and North American models this year with the Galaxy S22. Early rumors and potential chip manufacturing issues hinted that we may finally see a fully Qualcomm-powered Galaxy S22. However, that scare proved false, and Samsung has since confirmed that the Exynos 2200 chip is set to be produced with no holdup or issues.

WinFuture shared detailed specifications for each of the three flagship models, which effectively confirm all of the internal and external differences:

Battery sizes will start quite small this year as the Galaxy S22 is set to drop below the 4,000mAh barrier — down to just 3,700mAh. It would be easy to argue that this could have unfortunate lifespan consequences, but at this stage, we simply do not know. The Galaxy S22+ and S22 Ultra should fair better with 4,500mAh and 5,000mAh batteries respectively. 45W charging support is said to be available on the S22 Ultra, but rumors on the maximum charge speed of the other Galaxy S22 series handsets have been shared.

It’s practically inevitable that the Galaxy S22 series will launch with One UI 4.0 atop Android 12. That said, we’re highly likely to see a One UI 4.1 release that will include S22 exclusive functions and features. The recent full specifications leak for the Galaxy S22 series notes “One UI 4.1,” and this would follow previous generations by differentiating the currently available software on the recent flagship lines versus the previous model.

Android 12 on Samsung phones includes a number of tweaks but little sign of the major Material You and Dynamic Color overhaul added in the AOSP builds and Google Pixel smartphones. Samsung has implemented the color-changing feature as “Color palette.” This allows you to set color accenting for UI portions and supported apps based upon your wallpaper choice. Many of the other features we’ll likely see come pre-installed on the Galaxy S22 series have been detailed in our deep dive into Android 12 for Samsung phones:

Naturally, the addition of S Pen support for the Galaxy S22 Ultra means that we are expecting a return of many fan-favorite Note series features. We’re hoping to see a return of Air Actions, screen-off memos, and much more with the introduction of the S Pen to the Galaxy S series. It’s highly likely that Samsung will also demo some exclusive features at the Unpacked event, too.

At one point in time, there were wild rumors that suggested the Ultra model could come with an Olympus-certified 200-megapixel primary camera. That doesn’t appear to be the case though, as the Galaxy S22 series will come with some minor upgrades but nothing quite as pixel-dense.

The main sensor on the Ultra model will tout the same 108-megapixel resolution, but early rumors suggested that the early 2022 flagship is set to utilize the improved ISOCELL HM3 imaging sensor. This would make sense given that, since the Galaxy S20 series, Samsung has opted for a 108-megapixel main sensor on its flagship series. That is set to be paired with a 12-megapixel ultrawide and a dual telephoto setup that will consist of a dual telephoto lens setup.

We’ll see a 10-megapixel telephoto zoom lens with a 69mm focal range, while a periscope zoom lens will have a 230mm equivalent focal range. Like the Galaxy S21 Ultra from last year, we would expect at least 10x optical zoom backed by digital zoom up to the 100x level. However, we’re hoping to see some more tweaks to an already winning formula. The selfie camera is set to be rated at 40 megapixels.

For those looking toward the Galaxy S22 and S22+, the duo will ship with the exact same camera setup. This will consist of a 50-megapixel ISOCELL GN5 main sensor; 12-megapixel ultrawide; 10-megapixel telephoto zoom lens, which we believe will offer 3x optical zoom; and a 10-megapixel selfie camera.

We know that the Galaxy S22 series is set to be officially unveiled on February 9 at the first Unpacked event of 2022. It’s not clear just when the Galaxy S22 lineup will be available to buy, but rumored US pricing could be painful for some to read.

Samsung leaker @chunvn8888 has previously claimed that Samsung’s US starting price for the Galaxy S22 lineup is set to be $899. That’s an added $100 premium over last year’s Galaxy S21 series, which started at a still tough-to-swallow $799. This previous report also claims that Samsung’s Galaxy S22+ will cost $1,099 and the S Pen-touting Galaxy S22 Ultra will start at $1,299. These prices are both $100 higher than last year’s counterparts, but still down $100 from the Galaxy S20 series.

As for those of us in Euroland, according to Roland Quandt, the pricing translates to €849 for the Galaxy S22, €1,049 for the Galaxy S22+, and a whopping €1,249 for the Galaxy S22 Ultra. Prepare your wallets if you plan to buy any of the latest releases off-contract this year. In any case, we’re sure that Samsung will offer pre-order bonuses, free gifts, and other incentives to soften the blow somewhat.

What are you hoping to see from the Samsung Galaxy S22 series?

We want to open up the floor to you: What beyond the leaks and even including the leaks would you like to see come launch day? We are now on a countdown to February 9 launch event to finally get to see the latest Samsung series in the flesh.

Let us know in the comments section what you are hoping (or not hoping) to see from the Galaxy S22 lineup. What rumors are you excited or disappointed by? Remember to keep it civil.