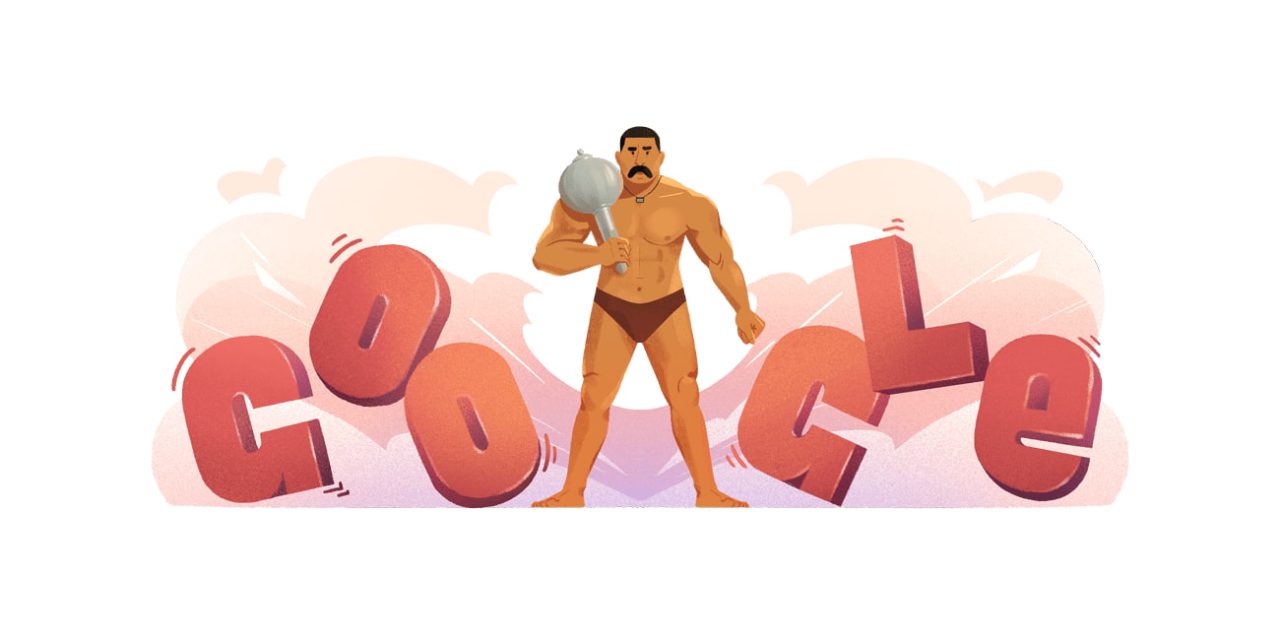 The latest Google Doodle honors the undefeated Indian wrestler Gama Pehlwan, aka “The Great Gama,” on his 144th birthday.

Ghulam Mohammad Baksh — later known as Gama Pehlwan or “The Great Gama” — was born on May 22, 1878 in Jabbowal Village in the Punjab Province of what was then known as British India. Gama had a tumultuous childhood, moving after the death of his father and again when his grandfather passed, ultimately living with his uncle, a wrestler.

Gaining an interest in intense exercise and wrestling from a very young age, Gama Pehlwan entered a strongman competition at the age of 10, claiming the top spot among over 400 competitors. From there, his training and interest in wrestling only increased. By some accounts, Gama’s training at one point consisted of as many as 5,000 squats and 3,000 pushups per day.

From the 1890s through 1910, Gama Pehlwan went on a streak of undefeated matches against India’s greatest wrestlers, with only his match against the national champion ending in a draw. Gama then grew his career internationally by challenging and defeating the greatest wrestlers in Britain, resulting in a match against world champion Stanislaus Zbyszko, which also ended in a draw.

Continuing his training, Gama Pehlwan ultimately defeated both of these opponents in rematches, earning himself the titles of Champion of India and World Champion. His career spanned multiple decades and more than five thousand matches, ending undefeated.

But Gama Pehlwan was also a champion of the people outside of the ring. In 1947, British India became independent from Britain and split to become separate dominions of India and Pakistan, a period that saw a great deal of civil unrest.

As told by Indiatimes, when a mob of rioters approached his new home village of Lahore in Pakistan, Gama Pehlwan and his fellow wrestlers stood in defense. It’s said that Gama simply “slapped” the sword-wielding leader, sending the man flying, a scene which caused the mob to disperse and flee. Reportedly, the wrestler made a way for the endangered villagers to safely cross the border to India.

Gama Pehlwan spent the remainder of his days in Lahore, passing away on May 23, 1960.

In the Google Doodle honoring the esteemed wrestler’s 144th birthday, you can see Gama Pehlwan standing strong, surrounded by the letters of “Google.” In his right hand, Gama is holding a silver mace, bestowed upon him by the Prince of Wales.