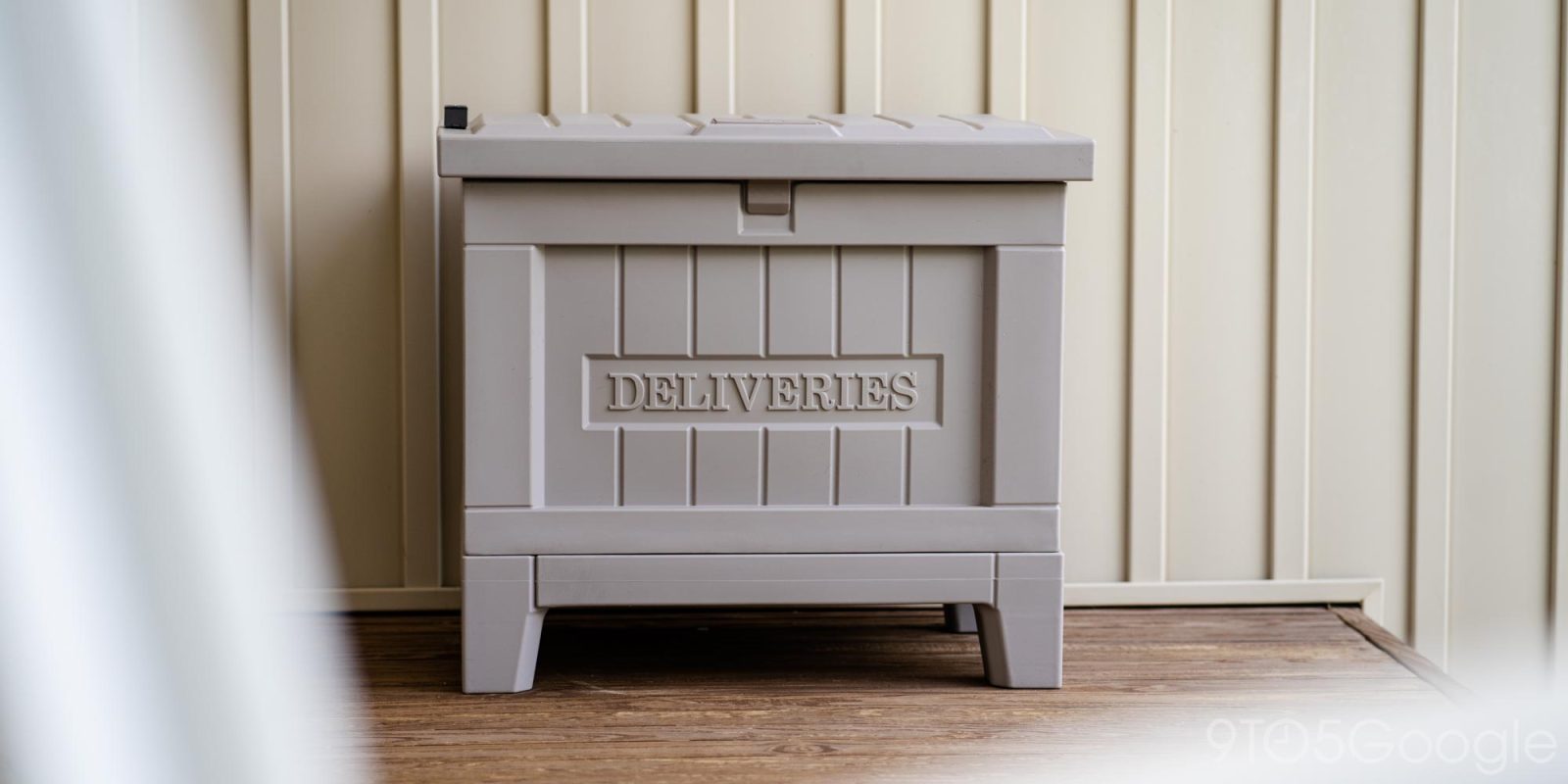 Stealing packages is an unfortunate problem nowadays, and one that just seems to be getting worse for some. While there are defenses, such as baiting bad actors with glitter bombs, an even better solution is to keep packages in a secure place. That’s what Yale’s Google Assistant-connected smart delivery box tries to do.

Yale Smart Delivery Box – What can it do?

A delivery box is a pretty simple idea – a place to put packages where they aren’t easy to see from the street. But in practice, it can be just a little tough to make this idea functional.

Here’s how Yale makes it work.

The Yale Smart Delivery Box uses a smart locking mechanism to let the box work properly. The lock remains open until someone opens it up, and then it locks on closure until the owner puts in their code to unlock it. It makes a whole lot of sense, and I’ve been enjoying just how it has worked for the past few months.

Nine times out of ten, this works flawlessly. A delivery comes, and is secure on my porch until I get a chance to run and get it. It gives me peace of mind, even though I’m fortunate enough to live in an area where porch pirates aren’t a huge problem.

The only hiccup I’ve noticed with the functionality here is that, occasionally, the lock seems to have a mind of its own. I’ve come outside one more than one occasion to find the box is locked, even though it hasn’t been touched in hours, and there’s nothing inside. This could be due to sensor alignment, or any other number of things, but it is a little frustrating when it happens. But since it’s fairly uncommon, it’s not a dealbreaker for me.

The box attaches to a base plate which you can fill with sand or screw into a porch. Both options make it considerably more difficult to steal the box and/or its contents. It’s not impossible for someone to steal this box, but it certainly acts as an excellent deterrent, because it would force a porch pirate to spend more time trying to get your packages. The backup method of getting into the box is also hidden under a plate, where you use a provided drill/screwdriver tip to unscrew the locking mechanism – it takes quite some time to do, though, which is good from a security angle. The box also has an air vent and an escape button, if a child was to lock themselves inside.

The “Deliveries” marking on the box is also, importantly, pretty subtle. From the road, you wouldn’t be able to easily read it, but a delivery driver will be able to once they get up close.

From there, you’ll need to set up the smart lock, which requires a “hub” inside of your home. The Yale Connect plug goes into a normal outlet and works fairly well, but has a surprisingly limited range. Yale recommends less than 10 feet between the hub and the lock, something I couldn’t do in my home. My Connect sits about 15-20 feet away, but it still works – but probably explains some of the connection issues I’ve had from time to time. Occasionally, the app and Google Assistant will read the lock as unavailable, but usually, it comes back on a second try.

An option on top of that is a keypad, which adds around $50 to the cost. It’s a solid addition that makes the box much easier to use, but it’s not exactly the most reliable device. Once in a while, it doesn’t unlock the box even if I put in the correct code – again, this could be a problem of the Connect being a little too far away, but I literally don’t have a choice with my home.

What can Google Assistant do with a delivery box?

Here’s a good question, though. What can Google Assistant do with a delivery box?

As you’d probably expect, Assistant can control the lock itself. You can lock the box with just a command, and unlocking will request a PIN that you assign during setup. The integration goes slightly deeper, with the Home app showing the lock with the ability to press and hold to lock or unlock. Notably, this is the only device I’ve seen that requires a PIN when unlocking a device within the Home app – which, at least currently, seems to cause the Home app to crash on some rare occasions.

The thing I found most useful here, though, was being able to ask Google whether or not the box was locked. Being able to simply ask the speaker in my office if the box was locked was a good way to let me know if something had been delivered without checking cameras. It was also often faster than the Yale app, too.

I’d love to see a future where Yale takes advantage of Google Assistant’s more proactive features with this box, but as it stands today, it’s still rather useful.

The hard part is getting drivers to use it

Unfortunately, there’s one huge roadblock to something like this. Delivery drivers aren’t really used to the idea of using this.

I’ve had the Yale Smart Delivery Box on my front porch for several months at this point – even without the locking mechanism for several weeks – and it’s still pretty hit or miss to get delivery drivers to use the box.

Amazon, FedEx, and my local USPS driver have pretty much gotten the process down. Even a Walmart grocery delivery driver caught on immediately. But I have noticed that UPS and DoorDash pretty much ignore the box, the latter somewhat understandably. Often, the box is just used as a table to hold boxes or bags until I retrieve them, which if anything highlights the delivery, rather than hide it.

Notes with your delivery can surely help here, and Yale even made a door tag to help “train” drivers, but there’s no full solution to this problem yet. Some drivers inevitably won’t use the box.

I also found that if the box was locked when a delivery came, either from a previous delivery locking the box or an unexpected locking, that driver would sometimes just skip the box entirely on future deliveries.

But honestly, I can’t blame most delivery drivers here. Many, especially those at Amazon, are on tight schedules. Skipping the extra few seconds to use the box isn’t something I can get mad at, but I do applaud the drivers that take the time.

The real kicker here is the pricing. At just shy of $300, the Yale Smart Delivery Box is not a small price to pay, even for the peace of mind it brings.

I’ve never had a package stolen off of my front porch at my home, so I’m not sure that I’d personally sink so much money into that protection. But if you live in an area susceptible to stolen packages, it very well may be worthwhile! Being a one-time cost with no subscription, $279 isn’t completely outrageous for the functionality at hand. You’ll pay $329 for the version with a keypad.

You can, of course, get a much more affordable box that works without the lock. For some, this is the easy and cheap solution, but it also feels like a half-measure. If stolen packages are enough of a problem to justify a box like this, it probably also justifies having something that can lock.

You can buy the Yale Smart Delivery Box from Yale directly, or Amazon. Just prepare for quite the big delivery when it does arrive.