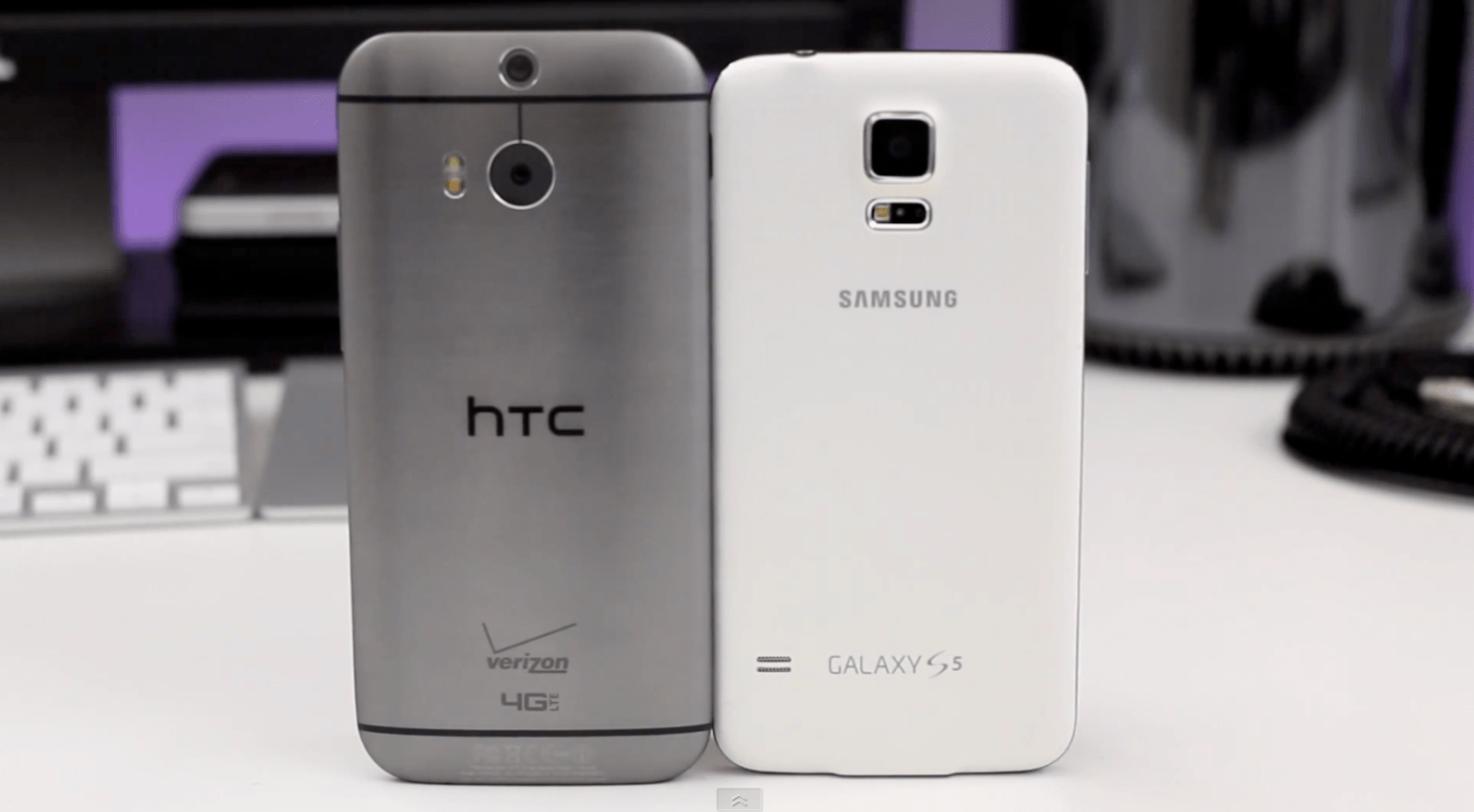 Samsung and HTC are going head-to-head competing to be the best Android smartphone in 2014. There’s no doubt that 2014 will be filled with a lot of exciting releases, but the Samsung Galaxy S5 and HTC One (M8) are among the first to arrive. The Galaxy S5 may be a worthy upgrade over its predecessor, but how does it compare to the HTC One (M8)? Both devices are packed with high-end specifications and comparably priced, but the question is, which one should you buy? Take a look at our comparison video above for all of the details.

As far as internal specifications go, these devices are extremely similar. The main differences between the Samsung Galaxy S5 and HTC One (M8) are going to be found in their build quality and software features. If you’re looking for a snappy Android device, you’ll get that with either of these smartphones. The HTC One (M8) has a comparable build quality when compared to its predecessor. The metal unibody design will undoubtedly hold up over time, but tends to be a bit slippery in your hands. Samsung’s Galaxy S5 is made from plastic, but also carries an IP67 dust and water resistance rating. Unfortunately, thanks to its IP67 rating, the Galaxy S5’s USB 3.0 charging port is now covered by a small door which can become annoying after a while. Both devices feature all of the appropriate sensors, a volume rocker, and a sleep/wake button.

On the front side of the HTC One (M8), you’ll find a 5-megapixel camera and dual Boom Sound speakers. The top and bottom speakers are excellent for consuming media and sound great in just about any situation, especially over the Galaxy S5’s small speaker on its backside. HTC also went with on-screen buttons instead of Samsung’s capacitive and home key solution. The Samsung Galaxy S5 also sports a 2.1-megapixel front-facing camera as well as a fingerprint sensor that’s built into its home key. Each device has expandable storage via a Micro SD card slot, but the Galaxy S5 stands out with a replaceable battery which is located under its back cover. Along with that, the Galaxy S5 has a special Ultra Power Saving Mode which can extend its battery life up to 24 hours in standby when the battery dips below 10 percent. This is made possible by the Super AMOLED display which is only required to light the white pixels when this mode is active.

On the back of the Galaxy S5, you’ll find a 16-megapixel camera capable of capturing UHD quality video, an LED flash, and a heart rate sensor that can be used with the S Health app. The M8 features a Duo Camera configuration which includes a 4-megapixel Ultra Pixel camera, a small 2-megapixel sensor to capture depth information and a dual-LED flash. The Duo Camera setup ships with various effects that can be applied within HTC’s camera app such as U-Focus. This specific feature allows users to refocus a picture after it has been taken. Similar to U-Focus, the Galaxy S5 has a Selective Focus mode which can accomplish very similar results, but does take a bit longer to process. Either mode will get the job done, but they only work properly when used under certain circumstances.

The HTC One (M8) is loaded with a lot of handy software features like Motion Launch Gestures and a Kids Mode (also found on the Galaxy S5), but overall HTC attempts to provide a clutter-free Android experience. Motion Launch Gestures provides shortcuts to the home screen, BlinkFeed 2.0, voice call commands, and the last active app by tapping and swiping on the screen when in standby mode.

The Galaxy S5 focuses more on gimmicky features like its built-in fingerprint sensor and heart rate sensor. In our testing, the fingerprint sensor was more of a hassle to use than a simple passcode lock screen, but it does also integrate with PayPal payments and serves as an authentication method. The heart rate sensor seems to be accurate, but the same result can be achieved on any smartphone with a camera and LED flash using several apps available in the Play Store.