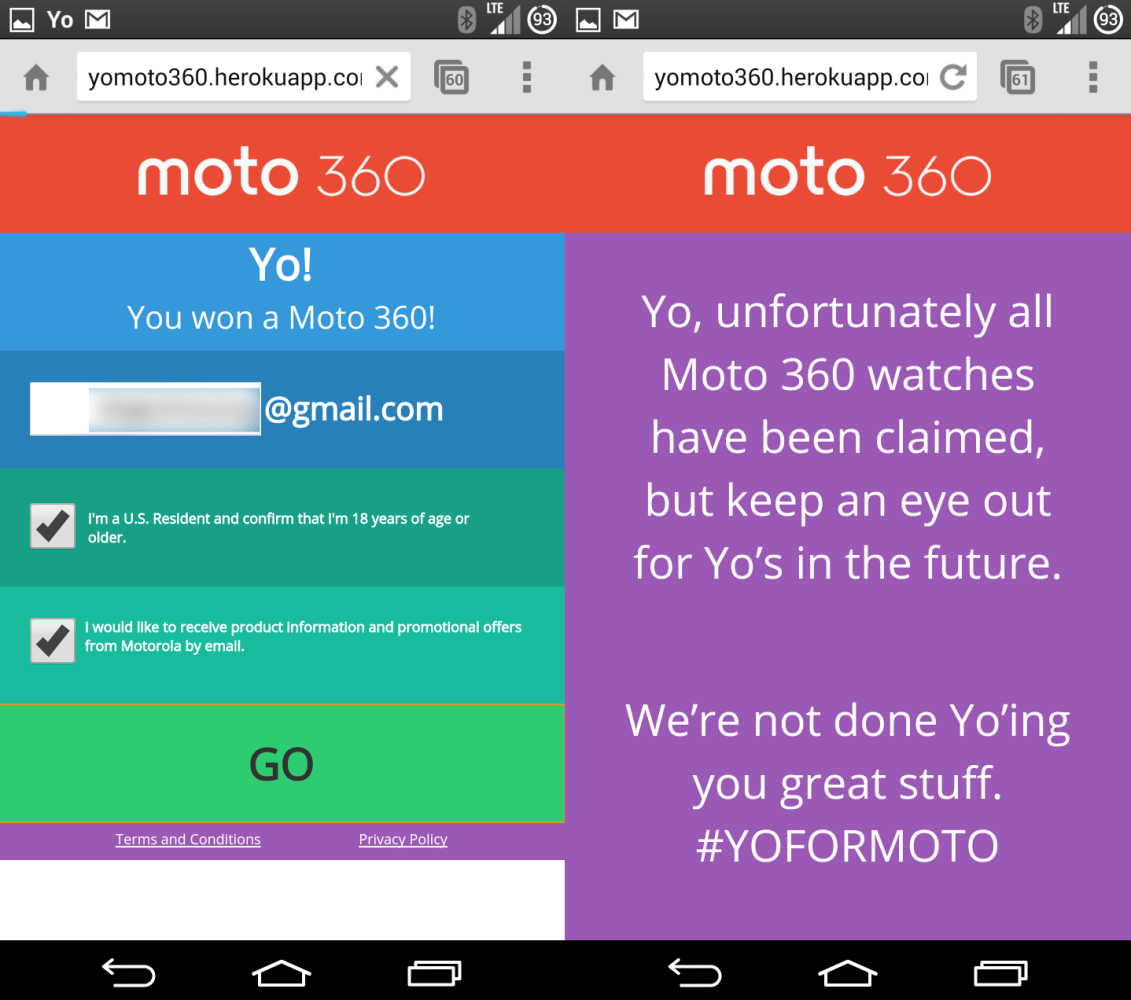 Motorola recently concluded a giveaway for its upcoming Moto 360. The giveaway was a collaboration between Motorola and Yo app which was announced yesterday with a very simple rule. First, download and install Yo on your device, then send Motorola a Yo and wait until Aug. 28, 2014 at 3:00 p.m. CT. Easy enough, right?

Motorola would then send a Yo link to all entrants and the first 20 people to click the link would win a Moto 360. Well, that’s kind of how it seemed, but that wasn’t actually the case. Motorola successfully sent a Yo link to all who initially entered, but it was a bit more complicated than just clicking a link.

When the Yos were sent out, everyone who clicked the link (before all of the devices were claimed) was taken to a web page that said they had “won a Moto 360.” This wasn’t actually the case. In order to claim a Moto 360, you were required to be one of the first 20 people to fill out the small form on that web page.

As noted in Motorola’s official rules for the contest:

The main part you need to focus on is the last sentence. As I mentioned, in order to win, you needed to be one of the first 20 people to complete the small form shown in the image above. It required a Gmail address and a couple of checked boxes.

With that said, it’s a bit unfair that seemingly hundreds of people were sent to a page stating that they had won this highly anticipated smartwatch. Contest participants began flooding Twitter and Google Plus with questions and complaints regarding the initial “winner” landing page, but at the end of the day, contest winners were selected based on who followed the rules.

I’m not a fan of how this contest went down. I believe it was a bit misleading. Motorola and Yo should have made the process more transparent, but instead the rules were tucked away on a page you probably didn’t think to check.

The main issue here, was telling hundreds of users they had won. I believe this caused a lot of individuals to take their time when filling out the form. If you’ve already won, might as well read through the form first and take your time entering the required information, right? Technically, everything went down correctly according to Motorola’s rules, but overall it was a bit misleading. What do you think?

Update: Motorola has responded to the complaints via Twitter and is going to “make it right” by giving away 20 more Moto 360 smartwatches. The rules are exactly the same. Motorola will send a Yo to participants at 11 a.m. CT on Aug. 29, 2014. If you’ve previously entered the contest, you’re already entered into this one.