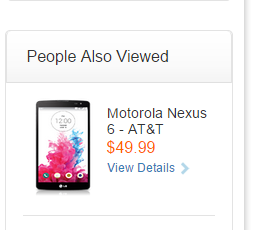 Earlier today it was reported that Google would finally unveil the Nexus 6 for all to see tomorrow, October 15th. Thanks a variety of leaks, including one of our own, we already know almost everything about it except for pricing and carrier availability. This evening, however, AT&T appears to have inadvertently outed the device on its website, revealing some of that information.

According to a link published on the carrier’s website, AT&T will offer the Nexus 6 for $49.99 with a new two-year contract. This is significant because it marks the first Nexus device sold via AT&T since the Samsung-made Nexus S (via Android Police).

You can view the AT&T listing for yourself by heading over to the LG G3 Vigor page and looking in the “People also viewed” column. Clicking on the link for the Nexus 6 doesn’t take you anywhere yet, however, as AT&T has obviously jumped the gun by even mentioning the device’s existence.

There’s always the possibility that the price is just a placeholder, especially when considering that the image is of the LG Vista. But it seems more than likely that AT&T will change the image and push the actual page live tomorrow when Google announces the device once and for all.