Motorola is bringing Moto Maker to the Moto 360 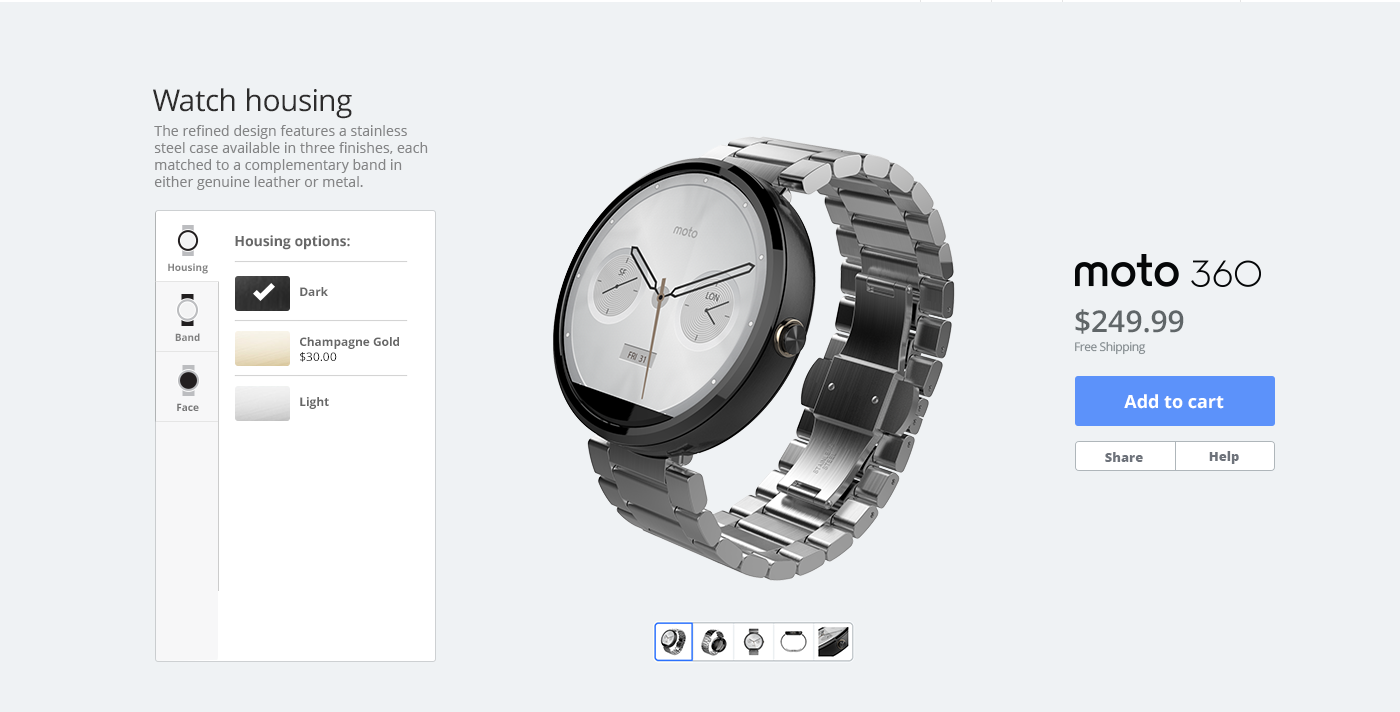 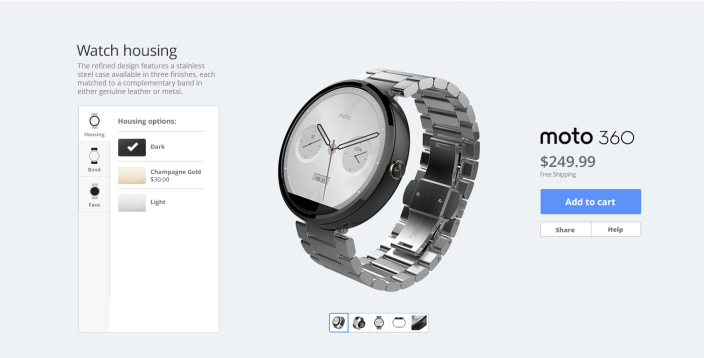 If you’ve ever purchased a Moto X from Motorola’s website, you probably know a lot about the company’s Moto Maker customization tool. You can build your phone any way you want it, and there are an almost endless number of combinations to choose from. Now, Motorola is preparing to launch its Moto Maker interface for the Moto 360, allowing you to customize your smartwatch much the same way (via Wired).

Although there are an almost endless number of possible variants of the Moto X, using Moto Maker with the Moto 360 is going to be a little bit more simple at first. There are going to be three main sections: housing, band, and face. You can choose between three housings, including dark, light, and a “Champagne Gold” option—which is going to run you an additional $30. Bands come in two sizes, and you can choose between leather and metal for each size.  And finally, you’ll get to choose which watch face appears on the device when you first turn it on.

Other than these aesthetic options, though, the Moto 360 is staying much the same. If you weren’t interested in a Moto 360 before, you probably won’t be interested in one when you have the option to create a custom device with a gold housing and a smaller, leather band. That said, if you just couldn’t find a model of the Moto 360 that enticed you before, you’ll soon have the ability to make one however you want. The feature is scheduled to launch in March.

Motorola has apparently planned to offer Moto Maker for the 360 since it was launched, but they say that this is just the beginning:

Over and over, Isaacs and Renaldi tell me this is just the beginning for Moto 360 and Moto Maker. They won’t be specific about what’s next, but they lay clues. Isaacs says he’s always viewed the watch “as a true collection and portfolio of products,” instead of the few options initially available. Moto Maker might soon be a natural place for Motorola to offer new bands and colors for each season and trend, or to offer unique, curated collaborations with designers and brands.

It seems as if offering the Moto Maker for the 360 might actually make more sense (or at least just as much) than offering it for a smartphone. After all, wearable technology is something that needs to be so very personal and customized to fit its user, and not everyone would want to wear one of Motorola’s pre-made Moto 360 configurations. But it’s also possible that the Maker might go beyond just aesthetic customization in the future, especially for wearables, where users could potentially swap out entire parts of their device for newer hardware.