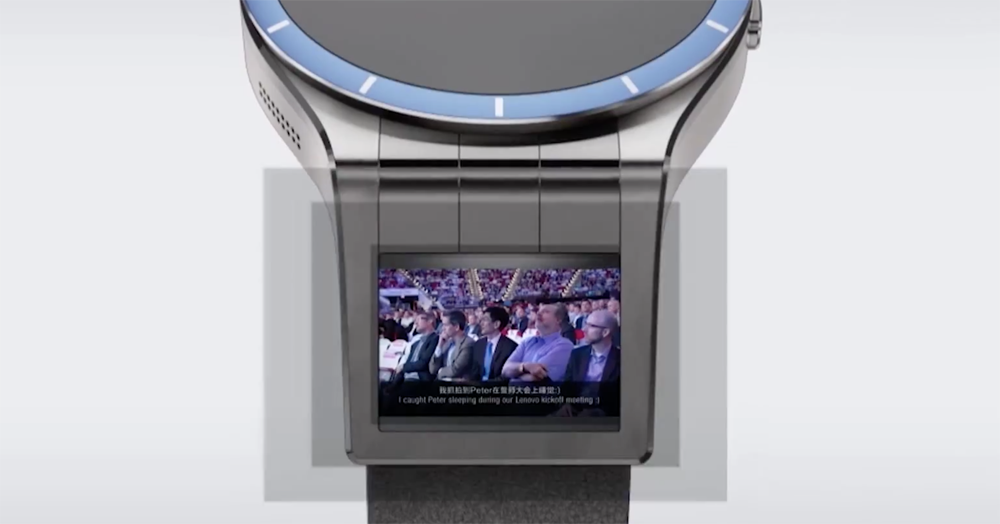 Lenovo has today shown off a couple of product prototypes that fall somewhere on the scale with ‘interesting tech’ at one end and ‘batsh*t crazy’ at the other… Buck Rogers style.

The first is Magic View, a smartwatch with a second display – a really tiny one – embedded in the strap. The idea appears to be that when the main display alerts you to new content, you hold the tiny screen up very, very close to your eye to view that content on the second display. I’m just waiting for someone wearing Google Glass and someone with their smartwatch in front of their nose to walk into each other …

The second product is a smartphone with a built-in Pico laser projector that serves a dual role: projecting images onto a wall, and projecting a laser keyboard onto a table. Neither idea is new – Samsung released a projector phone back in 2010, and you can buy both standalone pocket Pico projectors and laser projection keyboards right now – but the Lenovo Smart Cast is the first smartphone out there to incorporate both devices right into the phone itself.

I recommend turning your volume down low before watching the video.

Both prototypes are fully-functional, and Lenovo hasn’t yet given any indication on if or when either product is likely to come to market.

Lenovo has announced pricing and availability on a couple of other products, though. It has joined the media casting party, with the Lenovo Cast, its own take on the Chromecast. The device will be available worldwide in August, priced at $49. While more expensive than Chromecast, Lenovo says the dual-frequency WiFi signal is enough to broadcast across 20 meters.

It has also launched Moto Maker in China, allowing Chinese customers to create a personalized phone from RMB2,799 ($450) as of today. The Moto 360 smartwatch joined the Moto Maker program back in March.