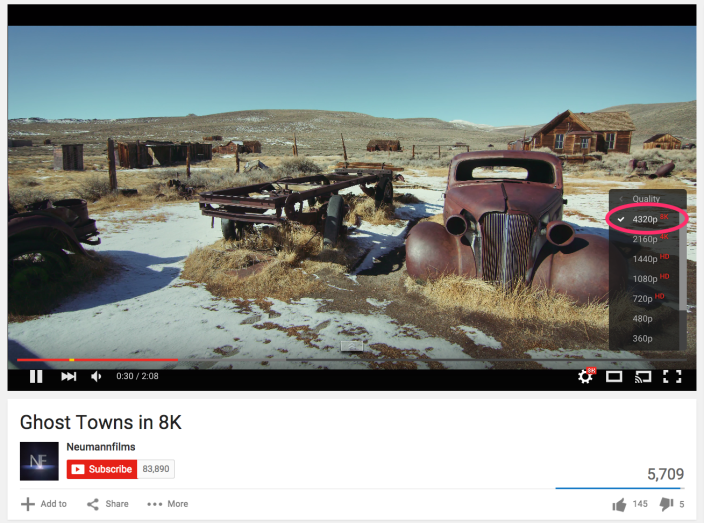 Update: Google responded to our request for comment by saying that 8K video has been supported since 2010, but that labeling for 8K video (the 4320p/8K quality setting like pictured above) was added “earlier this year.” We’re not sure how long ago they really mean, but a simple search on Reddit shows threads about the new label surfacing just over the past few days (Marques Brownlee also noticed it today), so there’s reason to believe it was a recent change.

It may seem a bit excessive to most of us, but it seems that playback of 4320p, 8K video is now possible on YouTube. The playback works in Chrome (although most consumers can barely play 4K at 60fps as it is), but YouTube doesn’t have any official announcement yet mentioning 8K video playback support…

The video above, called “Ghost Towns” and uploaded just yesterday, was filmed on a RED Epic Dragon 6K in portrait orientation and then stitched together in Adobe After Effects. To meet the 7.6K standard, some shots were simply scaled up by 125% from 6.1K. There are only a handful of 8K cameras available, and even still most won’t even arrive in the hands of customers until late 2015. Here are four of them:

When it comes to resolution and the ability of consumers to play high-resolution content like this at a high enough frame-rate to be watchable, YouTube faces a chicken and egg problem. Without 8K content, there’s less incentive to buy hardware which supports the playback of it, and without hardware that supports 8K video there’s less incentive to produce and share it. Also keep in mind that to completely remove the pixelation effect from virtual reality video, screen resolution will likely have to go far beyond the resolution of 4K. And we all know how interested Google is in VR.

It’s very possible that this is the first time we’re seeing 8K video playable on YouTube simply because, as mentioned, there aren’t many cameras capable of shooting in that resolution. We’re waiting to hear back from Google on a request for comment.