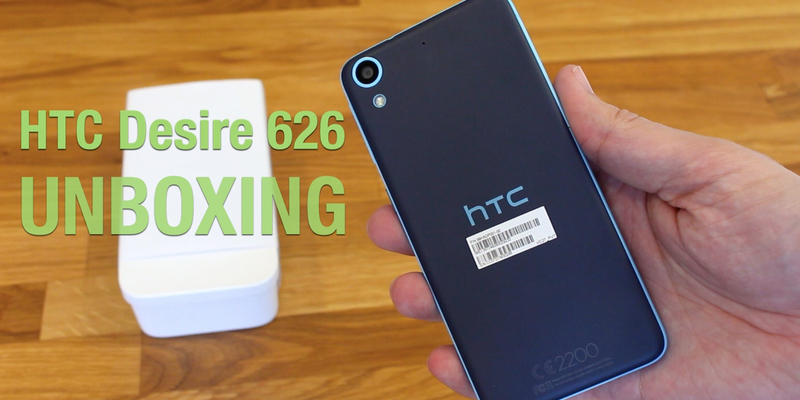 HTC’s Desire smartphone range promises to offer great build quality, design and features but without the cost of a flagship smartphone. One of the latest additions to that lineup, the Desire 626, is one of the more sensibly sized devices in the range…

With a 5-inch screen and two front-firing speakers (not BoomSound), the Desire 626 is roughly the same height as an LG G4, but considerably narrower. It’s predominantly made of plastic, but the solid feel and matte finish on the two-tone design is attractive and doesn’t seem overly cheap (apart from the flimsy plastic flap which covers the Nano SIM and Micro SD card slots on the left). With size, material and shape combined you get a very comfortable in-hand feel.

Its spec list is decent enough too, for a phone of this price point. There’s a 5-inch, 720p display on the front, a 13MP camera with 1080p video capture on the back and a quad-core Snapdragon processor to keep things running smoothly. It even has the latest version of Android (5.1 Lollipop) with Sense 7 UI on top. Its 2,000mAh battery may not seem impressive on paper, but with a screen resolution of 720×1280, the demands on its resources are not as heavy has they might be on a flagship device.

I unbox the phone, check out what comes in the retail packaging and give you my first impressions of the latest wallet and pocket-friendly smartphone from HTC.

If there’s one thing I don’t like, it’s the same issue I have with most HTC phones. Because of the stereo front-facing speakers and large black bezel around the display, the phone isn’t as neatly proportioned as I’d like. A phone this size could be pushing a 5.5-inch screen and only need to add a little width. This 5-inch screen doesn’t make up enough of the space available on the front panel. But then, this is HTC.

I’ll be testing the device over the coming days and weeks and will bring you a full review at a later date. I’ll also be comparing it with a couple of other budget-friendly smartphones of a similar price to see how HTC’s compares with perhaps more disruptive products from a lesser-known brand.

You can buy the Desire 626 unlocked from Amazon in the US for around $240, or you can opt for the slightly less powerful 626s which launched on several carriers last week.