There are many leakers who use Twitter to dispense information, but there is now a leaker on Reddit who claims to know the LG G5’s specifications. While this is definitely sketchy, the rumor is given a small amount of validity as it features a purported picture of the G5’s dual-camera setup…

Camera-wise, the G5 will apparently move to a dual camera setup with laser autofocus. Interestingly, one camera is 16-megapixels (like the current G4) and the other is 8-megapixels. Previous with two cameras allowed users to refocus pictures after being taken. The back of the phone will again feature a fingerprint sensor, volume controls, and a heart rate sensor. On top is an IR sensor and on the right side is a microSD and SIM card slot.

The LG G5 will supposedly have a full metal body paired with a 5.3-inch Quad HD. The screen is .2-inches smaller than its predecessor and the lack of 4K display matches an earlier report that LG and Samsung are skipping higher resolution displays for the upcoming generation of flagship devices. The phone will use a Snapdragon 820 processor coupled with 3GB of RAM. Charging will be done through a USB Type-C port. 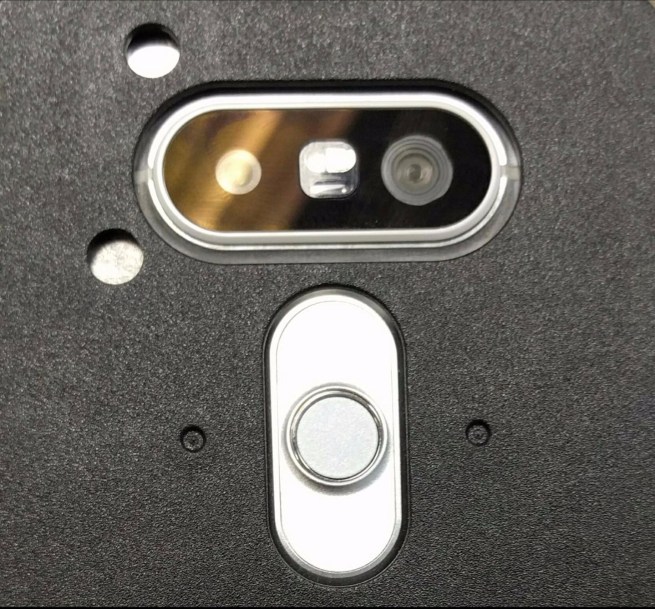 All the purported specs above are completely within reason, but at this point this is purely speculation. None of these specs are completely outside the realm of guessable, so Android enthusiasts will just have to wait till the G5’s release to see if we have another aspiring phone leaker in our midst.

Here’s the full rundown according to the leakster:

Micro SD card and sim slot on the right

16mp + 8mp + heart rate+laser focus sensor in the back

Duel camera on the back