Oh, the Galaxy S8. After the news avalanche two days ago we figured it would take a while for more to pour in, but obviously we were wrong. And so here you go: thanks to the evergreen Evan Blass (via VentureBeat) you can now lay your eyes on what is an almost certainly genuine picture of Samsung‘s upcoming flagship…

The report more or less confirms (yet again) everything we had heard, particularly from The Guardian’s report, but the picture above (also below) gives us a better look at how things actually are. For starters, the phone looks both incredibly clean and, at the same time, strikingly similar to its predecessor, the Galaxy S7 edge.

However, despite the fact that the photo makes it impossible to discern where the actual screen ends, Blass says that up to 83% of the front panel is taken up by it — it looks like there indeed wasn’t sufficient space for Samsung to slap its logo on it.

But that also means that there’s no space for front buttons: Samsung is moving to software keys, and the fingerprint reader previously nested in the physical home button is being moved to the back, where you see the small vertical area next to the camera.

The bottom of the device, which is slightly cut out in the picture above, shows the presence of a headphone jack, here sitting next to a USB-C port (the one on the right looking like micro USB is reportedly just an optical illusion). Apparently, the single grill we see at the bottom will be part of a stereo system, so expect an upgrade from last year’s rather dull speaker.

The two models, again confirmed to be both featuring dual-edge panels, will measure in at 5.8- and 6.2-inches respectively, while their aspect ratio, much like LG, is moving away from the standard 16:9 to a wider 18.5:9. Keeping overall dimensions similar to the two S7s, however, the batteries will reportedly be 3000mAh and 3500mAh respectively.

The Snapdragon 835 is again confirmed as the SoC, which will be swapped for Samsung’s own 10nm Exynos in certain markets — to back it up, RAM will stick to a somewhat conservative 4GB, instead of the 6GB initially expected. Cameras will feature 12 and 8 megapixel sensors on the back and front, respectively, both with last year’s f/1.7 aperture.

The screen will also be pressure-sensitive, at least partly: Blass says that “the lower part of the display [is] supposedly capable of distinguishing between different types of screen presses”. As we had already learned, Bixby (Samsung’s Assistant-competitor AI assistant) will also debut on the S8, and be capable of doing some visual search within the camera app.

As far as pricing goes, get ready to lighten your wallet quite stiffly; prices are going up €100 from last year’s already expensive models, coming in at €799 for the standard S8 and €899 for the bigger brother. Sure, there’s now 64GB of onboard storage, but achieving the ambitious shipping goal won’t be easy.

You can expect Samsung’s Unpacked event to kick off on Wednesday, March 29, with the device landing on stores’ shelves in the weeks thereafter. 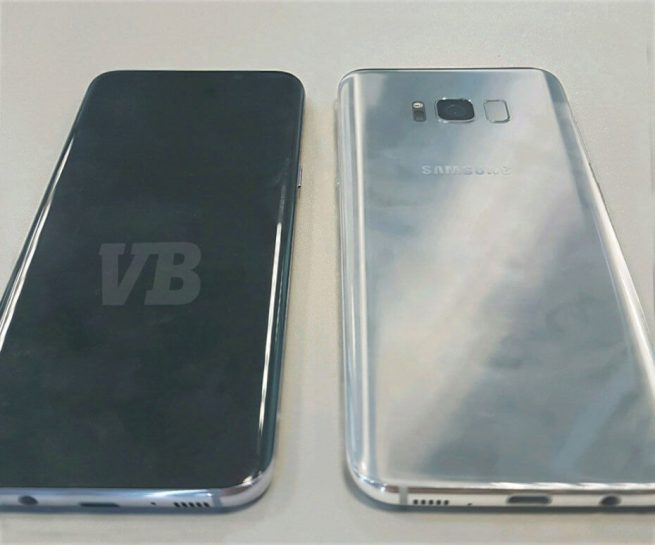