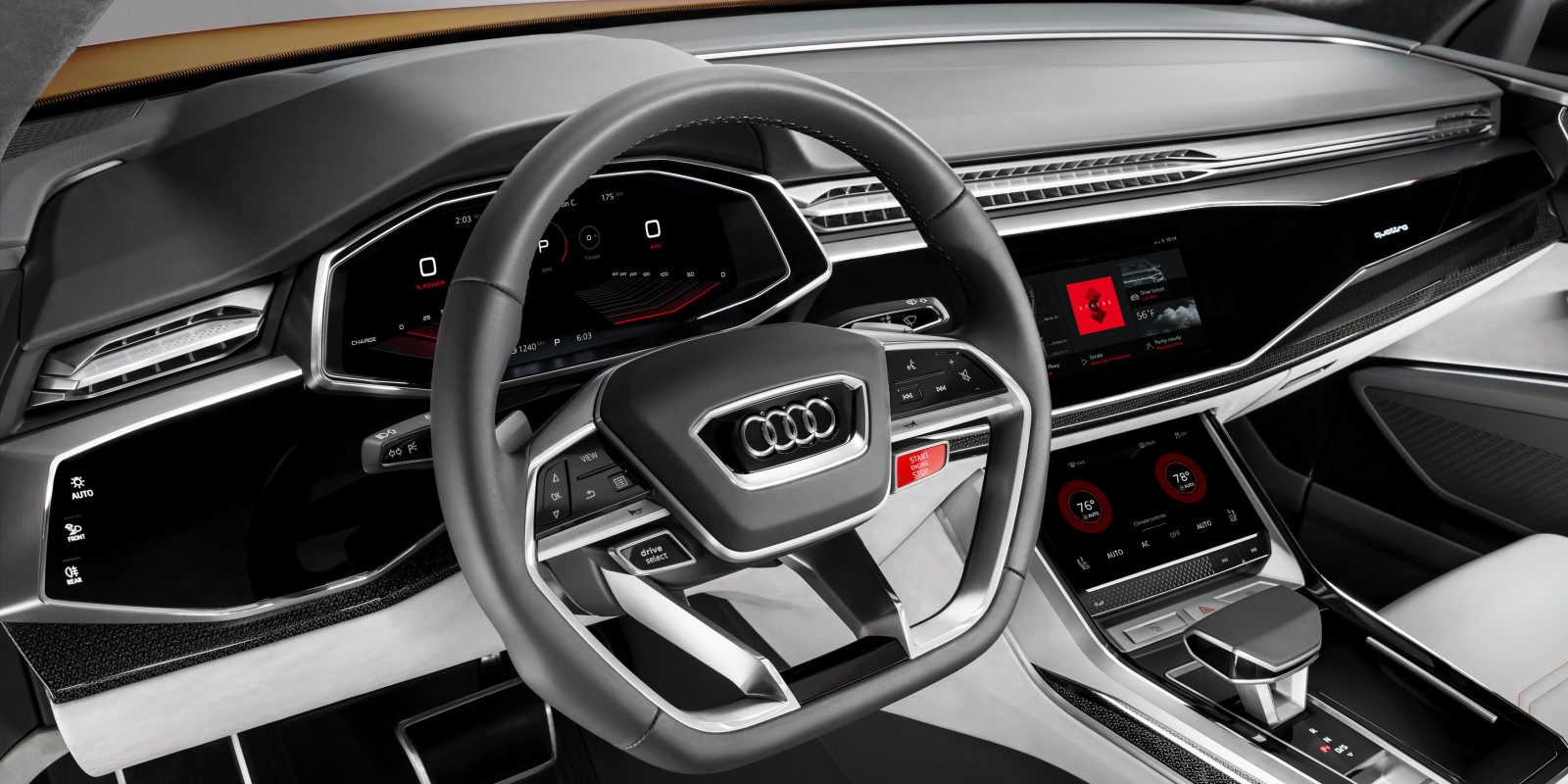 At Google I/O this week, Audi and Volvo will show off infotainment systems in their cars built around the Android operating system. To be clear, these aren’t one of the 300 Android Auto compatible car models that have launched since 2014.

These new infotainment systems have stand alone Android built-in which will allow your car to do things like run your favorite apps & services, and control vehicle functions like air conditioning, sunroof, windows, and more from Android on your dashboard.

As you might expect, you’ll also be able to find the nearest restaurant with Google Maps, EV charger with Plugshare, listen to Spotify or NPR (or Google Play Music?!), or ask Google Assistant for help—even when you leave your phone or tablet behind.

We had a brief look at the Android Car back at I/O 2016 (below) complete with its Tesla-like display, but today Google is announcing that systems based on Android are coming to market from both Volvo and Audi.

As you can see from the gallery below, this isn’t just Android ported to a car display. It appears that Google has made an entirely new UI for the car.

Immediately, a couple of things come to mind:

An interesting detail that Google’s vice president of engineering for Android, Patrick Brady told Bloomberg was “that Apple’s CarPlay could run on top of cars with the embedded Android system.” Even if it’s technically possible, it may be unlikely for Apple to agree to implement CarPlay into Android based vehicles.

Google won’t be receiving any revenue from car manufacturers as they bring Android to their infotainment systems, but it will allow the company to expand Google Assistant and stay a step ahead of Apple and Amazon in the vehicle industry for the time being.

We’ll be on hand at Google I/O starting tomorrow night (covering car stuff with sister site Electrek), so stay tuned for the coverage.

The session will be at Google I/O Wednesday and called Assisting the Driver: From Android Phones to Android Cars. You can reserve your seat here or watch the livestream at home.

Cars are rapidly transforming into connected, intelligent machines and provide a new opportunity for enabling a rich app ecosystem. However, cars still represent a challenging environment: driver distraction, varying screen sizes & shapes, different input mechanisms, local regulations, and much more. Android Auto enables developers to deliver seamless experiences that reach millions of drivers through the ever-increasing number of Android Auto compatible cars and the new standalone phone app. We’ve made great progress so far, but this is just the beginning for Android in cars with a lot more on the road ahead. In this session we’ll talk about recent developments, and an exciting preview of what’s ahead, as we integrate Android, the ecosystem, and the Google Assistant more deeply into cars.

internet: Audi is taking part in the renowned Google I/O developer conference, where it is

presenting its concept of a next generation infotainment system with fully integrated Android.

This world premiere opens up new perspectives, which will allow the development of

connectivity services to be greatly accelerated.

The three-day Google I/O, which begins May 17 at Google’s headquarters in Mountain View,

California, is considered as the largest and most important developer conference in the software

industry worldwide. One of the exhibits features Android as a seamlessly integrated solution for

in-car infotainment applications, which is being developed by the Android Open Source

Community and its millions of members.

has Android on board. The new functions, including the streaming service Spotify, Google Play

dashboard. The information is also visible in the Audi virtual cockpit in the driver’s direct field of

view. This marks the first time the new services have been fully integrated into Audi’s

brandspecific infotainment system. While the navigation map continues to use the Audi-typical

HERE database, the driver can also choose to navigate with Google Maps. A message center

for incoming messages and calls round out the new services in the show car.

The seamless integration of Android harbors tremendous potential. Android is the world’s most

applications. New apps can quickly find their way into the cars as additional connected services,

for example, if they fulfill the requirements of Google and Audi. The foundation for this is the

Android platform. Other customer advantages alongside shorter update cycles include a

When people are able to pursue any activity they want in the car of the future, the integrated

Android system will enable them to use the entire world of Smartphone apps in the car.

Volvo Cars, the premium carmaker, has announced a close partnership with Google, one of the world’s

largest technology companies, to develop the next generation of its award-winning in-car infotainment and

connectivity solution based on Android, offering access to a wide array of apps and services. It will launch on

The partnership promises to revolutionise how Volvo customers engage and interact with their cars. The

offer connected and predictive services in and around the car.

“We are making an important strategic step with the Google partnership. Google’s platform and services will

enhance the user experience by enabling more personalisation possibilities, while Android will offer

future for the car industry. Using Android as the base operating system will increase speed and flexibility in

the development and offer its customers the ability to personalize the connected in-car experience.

“We’re thrilled to partner with Volvo to bring Android into their next generation connected cars,” said

Patrick Brady, Vice President of Android Engineering at Google. “This partnership gives us the opportunity to

“With the advent of Android we will embrace a rich ecosystem while keeping our iconic Volvo user interface.

We will offer hundreds of popular apps and the best integrated experience in this broad, connected

Google Local Search, a location based service application. This will be released through an update to

Further details on the partnership and Android OS will be announced at Google’s annual tech show, Google