Reports are coming in this afternoon of an active shooter at the YouTube headquarters in San Bruno, California. There is heavy police activity at the site of the video network’s campus, with employees noting they are in lockdown. At approximately 1:30PM, police confirmed that they are “responding to an active shooter.”

According to San Francisco news station KRON4, local authorities have received multiple 911 calls from the YouTube area. Surrounding buildings near 901 Cherry Avenue are also in lockdown, with police asking the public to stay away from the location. There are also multiple reports of the I-280 highway being shut down in response.

One YouTube employee reported hearing shots and barricading themselves in with other coworkers just before 1PM. That particular Googler — along with several others — have since posted that they’ve been safely evacuated.

Images from the scene, along with other employee accounts, show and confirm a heavy presence of police and other emergency services. According to one area police scanner (via Twitter), there are “six to nine total patients.” CBS San Francisco corroborates that multiple victims are being taken to the hospital.

The Stanford Health Care Hospital said it was expecting four to five victims, while San Francisco General confirmed that they have received patients and are continuing to do so as of around 1:45PM.

Google notes that they are coordinating with authorities and working to provide more information as it comes in.

Update: San Bruno Police Chief Barberini made a statement at 2:30PM recounting that four gunshot victims were found at the scene. In the process of clearing the building, a deceased female was also found with what appeared to be a self-inflicted wound. The investigation is still ongoing, but authorities currently believe she may be the shooter.

Update 2: Sundar Pichai sent a message to Googlers around the world this afternoon about the incident, with another tweet noting that he and Susan Wojcicki are working to provide support for all employees. According to reports, the YouTube CEO was at headquarters during today’s events. 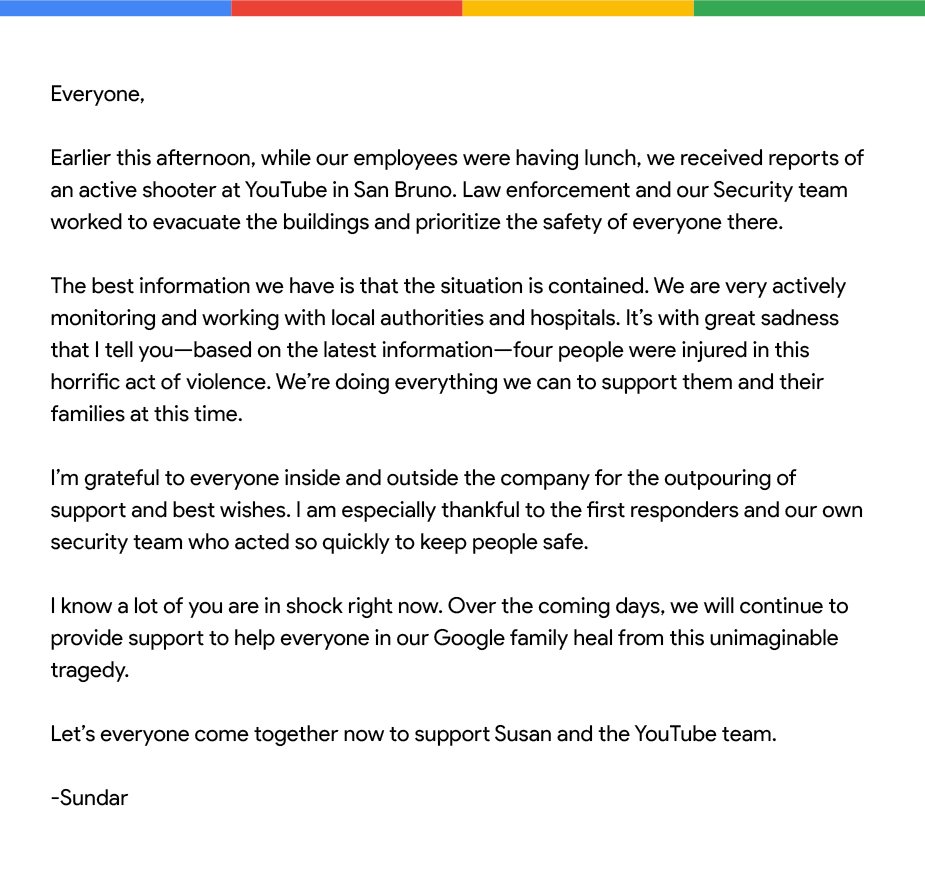 Update 3: NBC News, citing several law enforcement officials, this evening named Najafi Aghdam as the suspected shooter responsible for today’s events. The SF Chronicle found a personal website and other social media accounts likely belonging to the 39-year-old where she ranted against the video site’s policies in regards to her content.

On an Instagram post dated March 18, Aghdam claimed YouTube was using its tools to “censor and suppress people who speak the truth and are not good for the financial, political gains of the system and big businesses.”

Namely, she complained (via Mercury News) how her videos — which covered a wide scope, but mostly focused on animal activism —  were apparently demonetized. Aghdam claimed such things as censorship, suppression, and filtering against her in subsequent posts.

“There is no equal growth opportunity on YOUTUBE or any other video sharing site, your channel will grow if they want to!!!!!” Aghdam wrote. “Youtube filtered my channels to keep them from getting views!”

Her channels and other accounts have been removed as of Tuesday night.

There are no words to describe how horrible it was to have an active shooter @YouTube today. Our deepest gratitude to law enforcement & first responders for their rapid response. Our hearts go out to all those injured & impacted today. We will come together to heal as a family.

There are no words to describe the tragedy that occurred today. @SusanWojcicki & I are focused on supporting our employees & the @YouTube community through this difficult time together. Thank you to the police & first responders for their efforts, and to all for msgs of support.

Zuckerberg San Francisco General Hospital confirms they have received patients from the incident. But can't give a number right now because "they are still receiving patients" – according to head comms person

Police have blocked the 280 freeway near YouTube HQ where active shooter has been reported pic.twitter.com/g4cmPTT2ks

The ATF San Francisco Field Division is responding to a reported shooting at YouTube headquarters in San Bruno, Calif. pic.twitter.com/l7XabZ5FpI

Re: YouTube situation, we are coordinating with authorities and will provide official information here from Google and YouTube as it becomes available.

We are responding to an active shooter. Please stay away from Cherry Ave & Bay Hill Drive.

I got evacuated outside with my hands up. I’m with other people. I don’t think the shooter’s been found that I know of. I saw blood drops on the stairs I walk up everusay. I’m shaking. This is surreal. I hope my colleagues are okay.

Police cruisers pull up, hopped out with rifles ready and I told them where the situation was as I headed down the street to meet up with a couple team members.

Police activity at 901 Cherry Ave, please stay out of the area. pic.twitter.com/H6iAj0g7ra

Active shooter at YouTube HQ. Heard shots and saw people running while at my desk. Now barricaded inside a room with coworkers.

There are police surrounding the @YouTube building – potential shooter. Be safe! pic.twitter.com/4JTKkn3Oy1