Last month, version 8.14 of the Google app revealed a “Pixel Stand” accessory that will likely be sold alongside the Pixel 3 and Pixel 3 XL. Leveraging the Google Assistant, it essentially turns the phone into a miniature Smart Display of sorts. Today, that interface has likely been revealed.

Enabled by XDA, it is basically Assistant’s visual snapshot feature but with much larger touch targets and — at this stage — no personal information like Calendar appointments or reminders. According to the Google app, “Your Assistant can use your personal info to make suggestions, answer questions, and take actions for you when your phone is locked and on your Pixel Stand.”

This UI is likely still under development with a stark white background reminiscent of Google’s other recent apps.

The temperature is prominently noted up top, followed by a weather icon and current condition. Below that is a “Try Saying” suggestions box that features Material Theme’s rounded corners. The “Hey Google” or “Ok Google’ hot words are not mentioned, nor are users first instructed to tap the Assistant icon at the bottom of the screen.

Below are various actions like “Make a phone call” and “Set a timer.” Due to the rounded button appearance, it seems that users will be able to interact with the touchscreen and not be limited to voice. Most of the icons are generic, but “Play Music” uses Spotify’s, with an “Explore what’s new” button below.

Given that “dreamliner” docks are not specific to the Pixel 3, it’s likely that this Assistant interface will also be leveraged by OEMs and other docked wireless charging accessories. 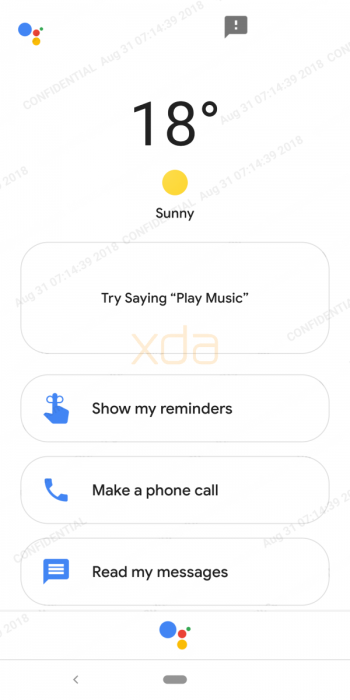 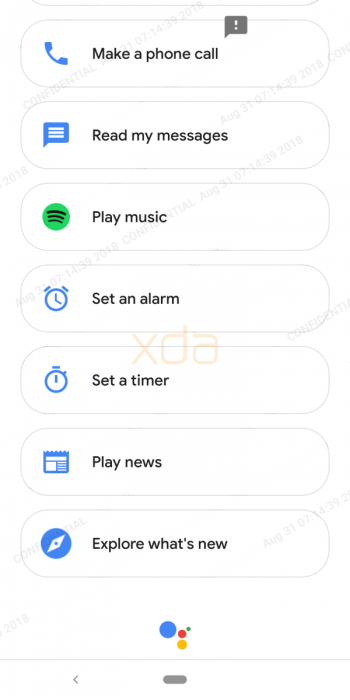