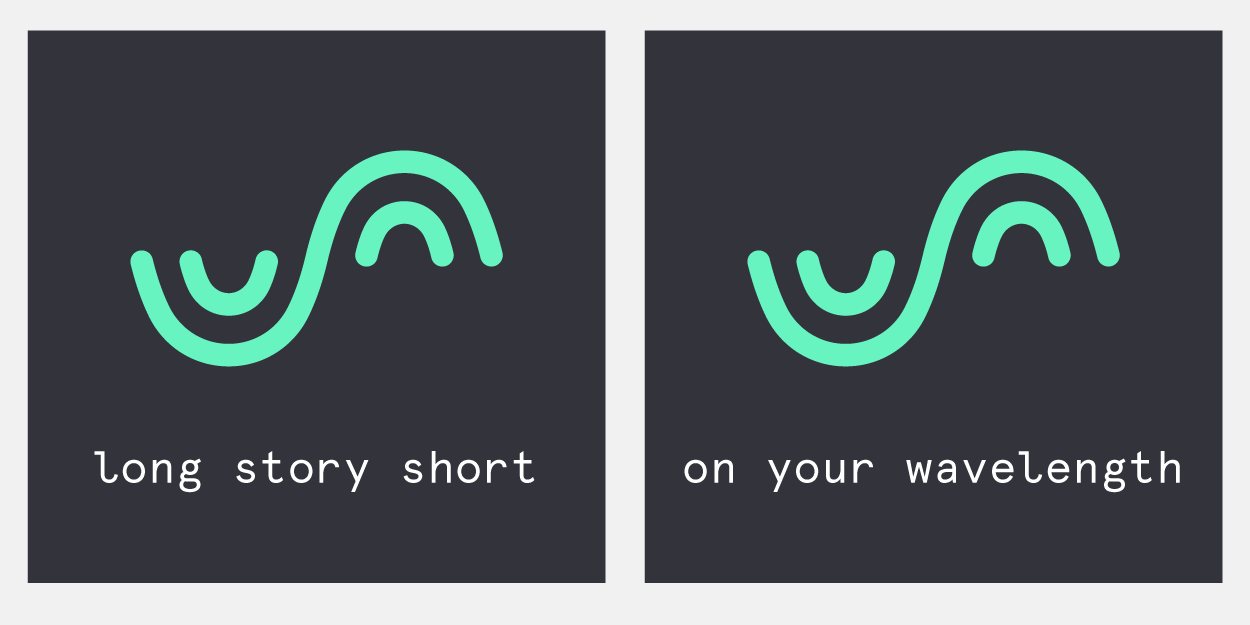 Last month, Google confirmed that it was developing an experimental podcasting app called “Shortwave.” Now, we have a clearer idea of what this Area 120-developed project could be and it points to a grand vision of an app that delivers only personalized and relevant snippets of podcasts.

Design experiments we found published on the website of a recently-departed Google designer (whose identity we’re withholding since these documents almost surely aren’t intended to be public) go into great detail about the general premise behind Shortwave with an app mockup, branding, and other guidelines.

The “Brand Statement” for Shortwave speaks to the abundance of shows and episodes due to the current golden age of podcasting. This upcoming product developed by Google’s Area 120 incubator believes that this results in two problems.

Update: According to a Google spokesperson, the approach described in this design document was an “early exploratory concept” for Shortwave. It’s “not representative” of the current product. Take that for what you will.

“The language here is a long-outdated artifact of early exploratory concept work, and not representative of the product now. In true Area 120 fashion, teams are constantly experimenting and iterating, so unfortunately, the Shortwave team has long “waved” goodbye to this approach.”

First, the issue of curation and finding content worth listening to, and second, actually having the time to listen to it. Shortwave solves this by “serv[ing] it to you in tiny moments,” with Google considering this the “next wave of podcasting.” 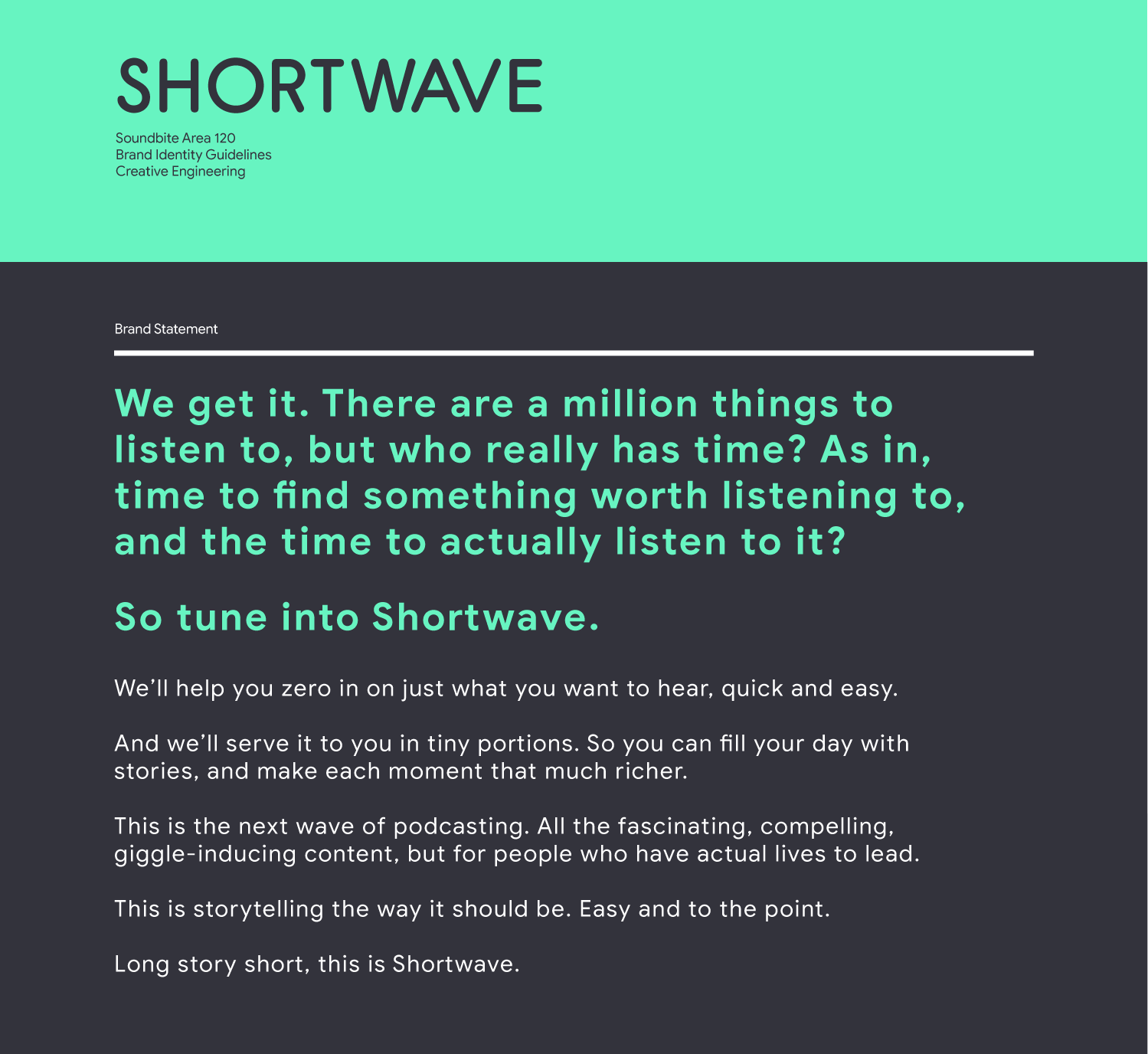 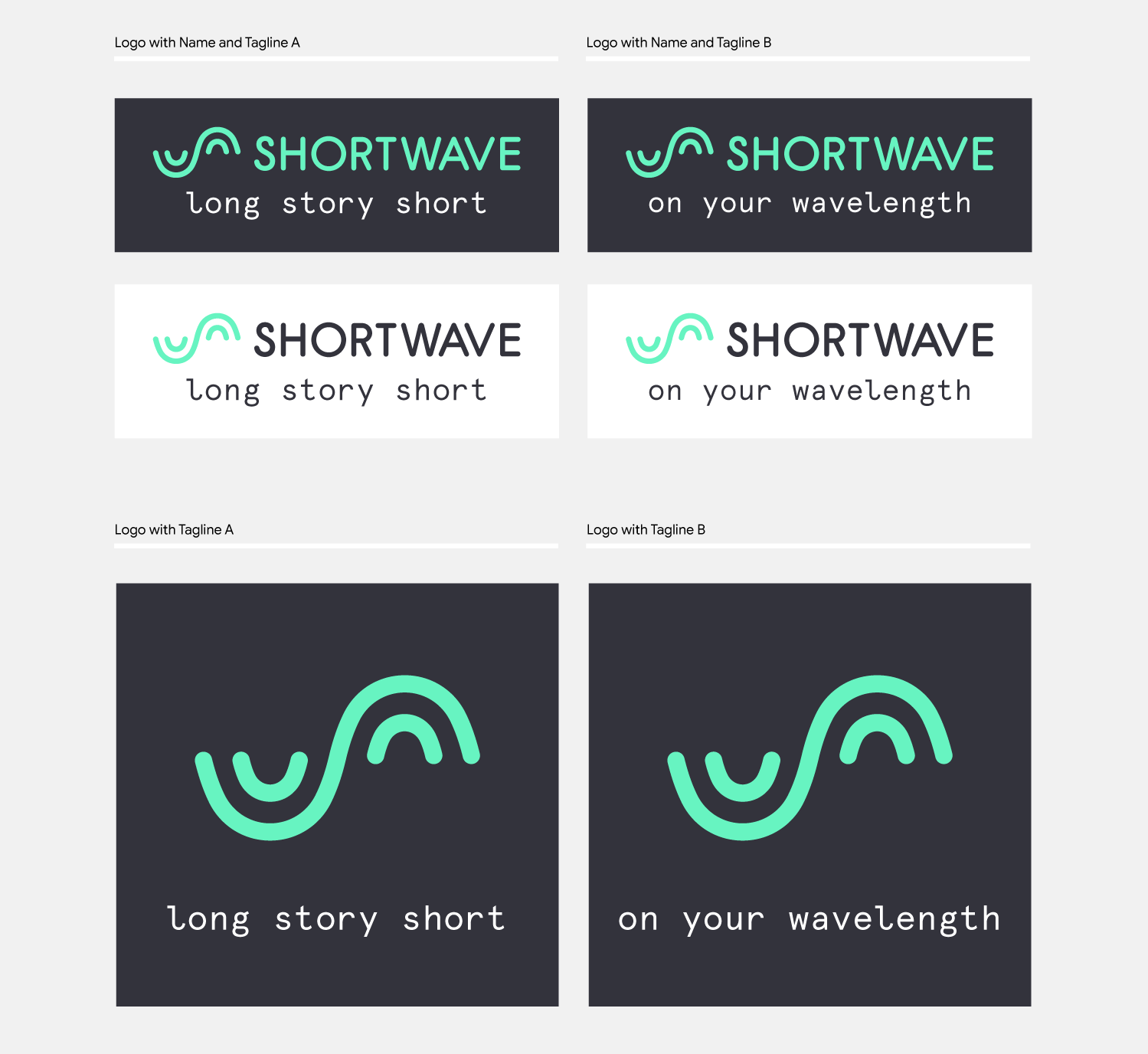 The document describes this “next wave” as taking “a million things to listen to” (presumably the many podcasts available on platforms now), as well as “all the fascinating, compelling, giggle-inducing content” (presumably, that same content), and bringing it to the “people who have actual lives to lead.”

That seemingly would allude to Google finding existing podcasts, slicing them up to just the most relevant portions, and serving them to users. Of course, this could be achieved by manual curation and optimized human workflows, but the “moonshot” nature of Area 120 products — and Google itself — could suggest some kind of more ambitious, automated approach to this.

With artificial intelligence all the rage at Google, Shortwave as a project might be aimed at leveraging machine learning to cut up full-length podcasts into these “tiny portions” called “Shortwaves.” Ranging from 1-10 minutes, users could select and play them throughout their day.

A mockup of the Shortwave Android client reveals a simple homescreen that starts out by greeting you in a fashion similar to Google Assistant’s visual snapshot or the Google Home app.

Users are then asked what they want to listen to, with suggestions grouped around: 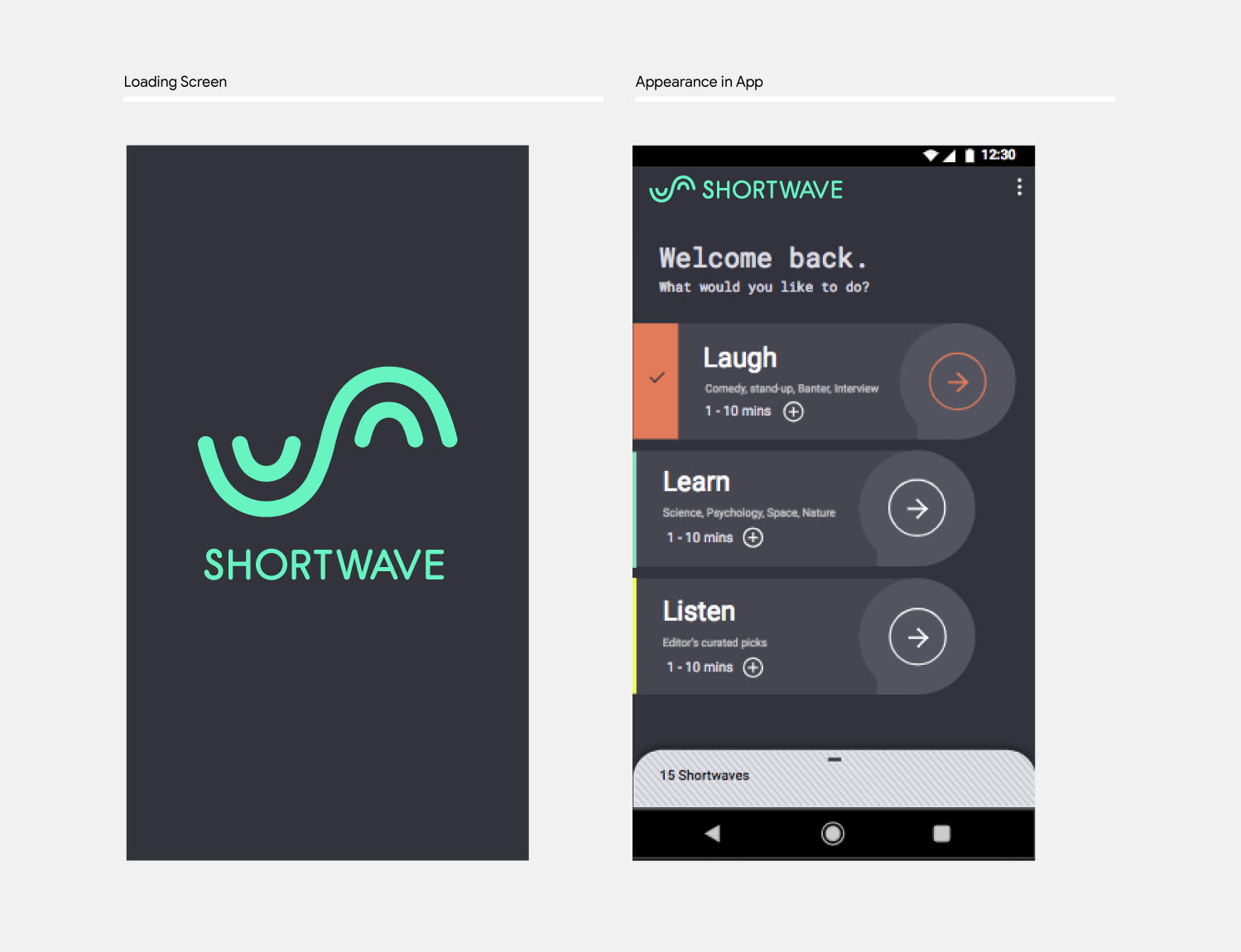 The last section — and how it’s seemingly curated by editors — lends some credence to the idea that the other categories are not human curated. Meanwhile, the concise and personalized nature is reaffirmed by taglines for the app, like “long story short” and “on your wavelength.”

Shortwave has to be considered in the context of the current Google Podcasts initiative, since the main goal of Area 120 is to take crazy ideas and, if feasible, one day bring them to Google’s mainline products.

The current iteration of Podcasts is very straightforward and akin to the iTunes podcast directory. However, Google has repeatedly stated that AI features like speech-to-text will one day be used to automatically subtitle podcasts, while Google Translate could make episodes available in other languages.

Meanwhile, Google’s podcasting head has talked about audio one day appearing in Search results alongside direct text snippets and parts of YouTube videos. What Shortwave is doing to cut down content into relevant “answers” could be a part of that future.

Google Podcasts does provide users with show recommendations, but Shortwave sounds like it is aiming to deliver a more personalized and precise experience. Last month, Google PR emphasized in a statement to The Verge that Shortwave is not related to the company’s existing Podcasts product.

But regardless, Shortwave could in the future be one feature of Google Podcasts proper. Or it could be found to be too ambitious or impractical by other means and be killed off entirely before it gets anywhere close. Either way, at least we now have a pretty good idea of what this in-development project is. 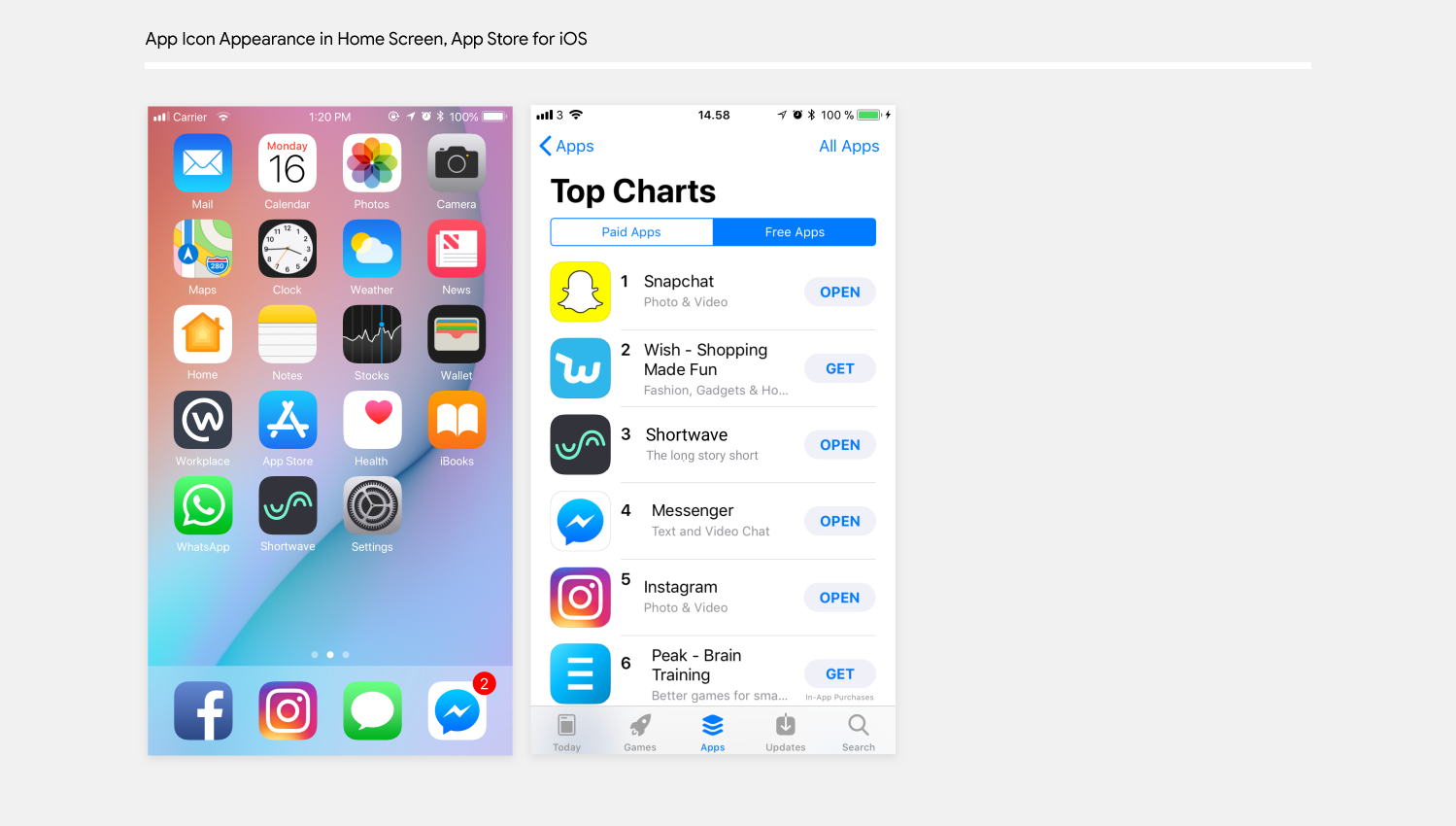 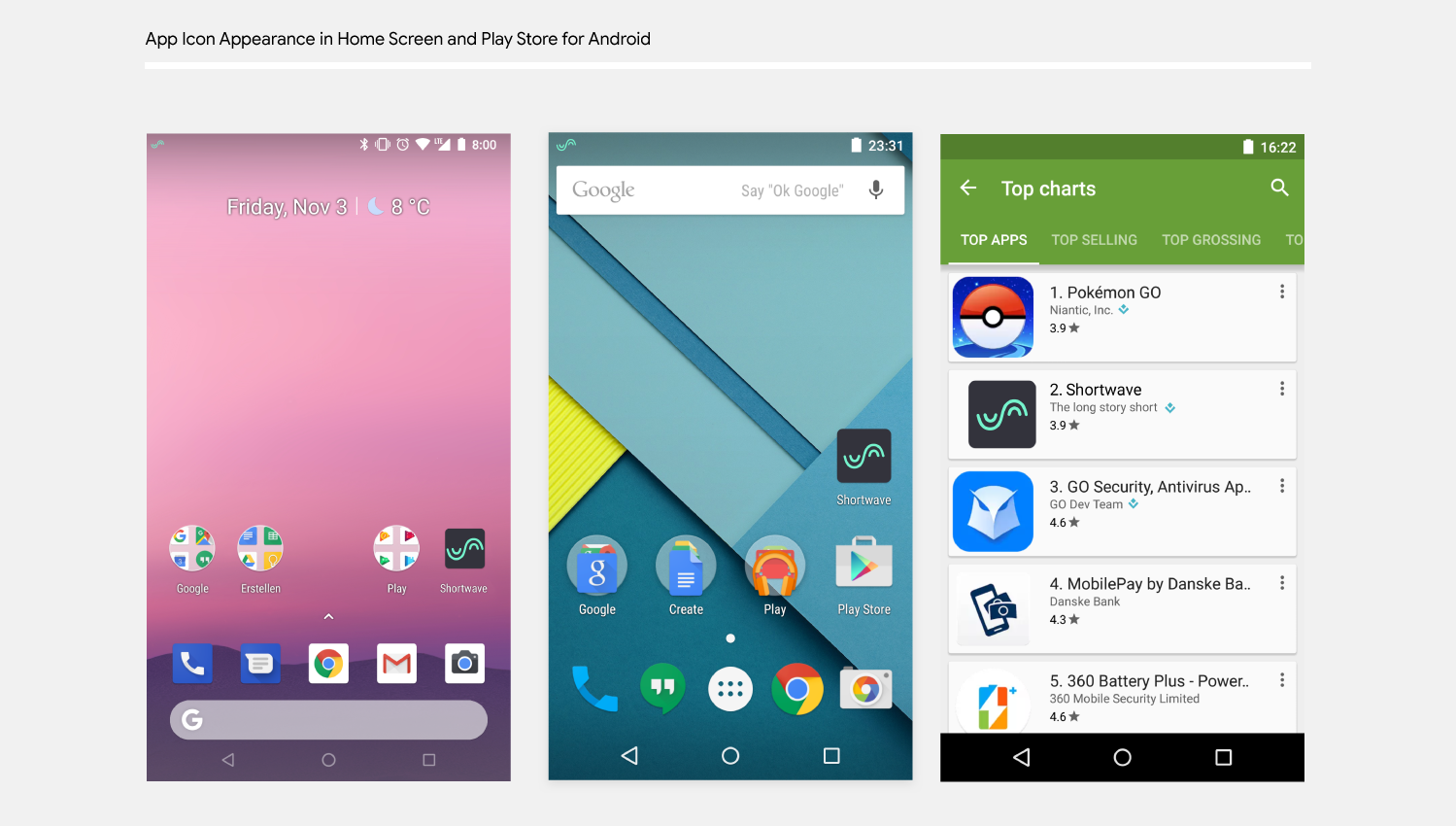 Regardless of how Shortwave arrives at the shorter clips, this could be a controversial product where Google itself takes shows, with or without permission, and curates them into parts. Presumably, podcasts would have to opt into being curated with the benefit being exposed to a wider audience and new listeners.

But cutting content, without proper context, might be something that hosts do not want to sign-up for. Then there is the matter of what happens to in-show advertising. Lots of questions yet to be answered.