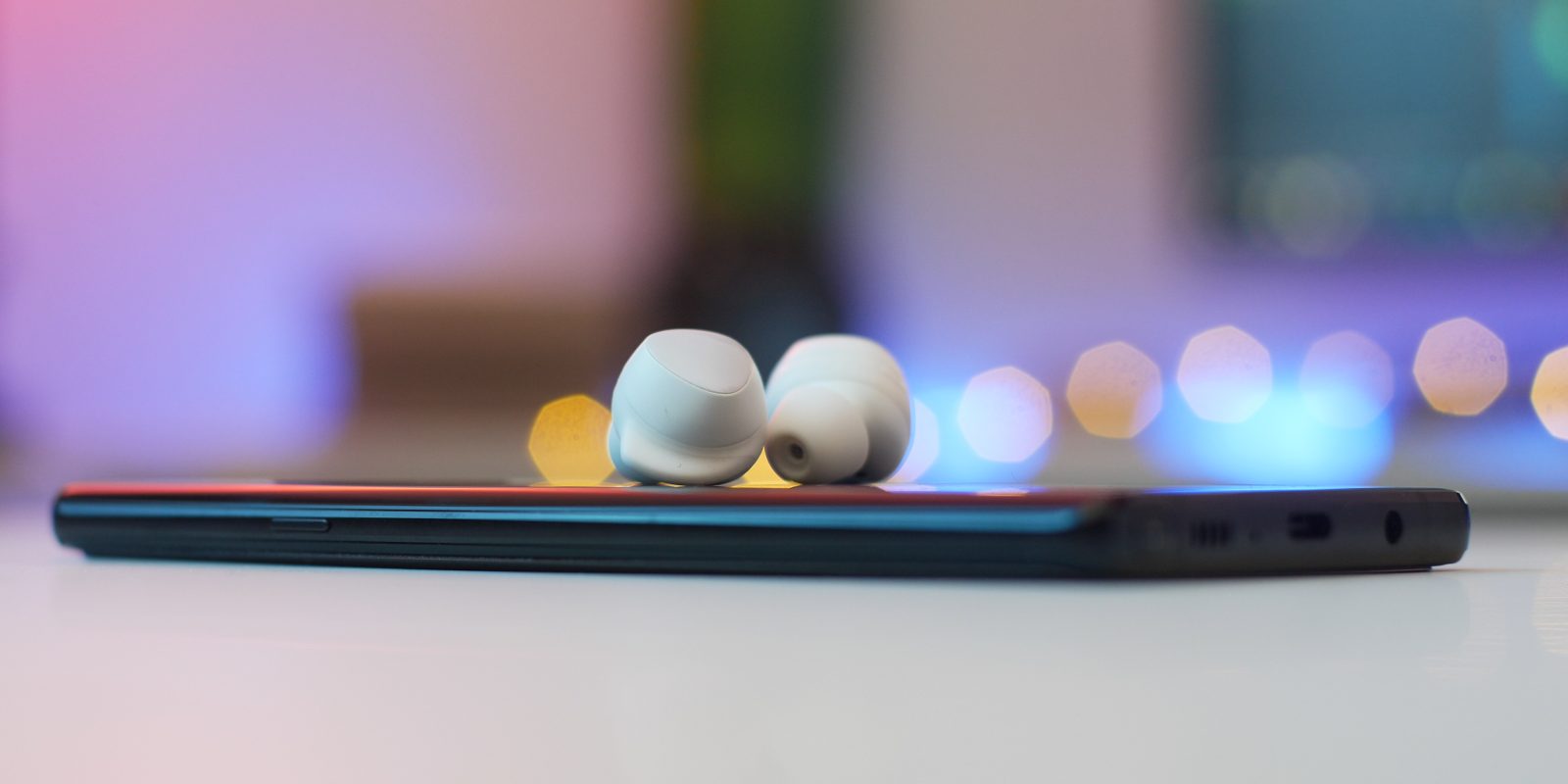 At a time when device manufacturers scramble to remove the headphone port and tell us that Bluetooth audio is the answer, there are very few truly decent pairs of wireless earbuds to fill the gaping hole left behind.

While we await our Samsung Galaxy S10 review unit, the unexpected brilliance of the Samsung Galaxy Buds has caught me — at least — off guard. As someone who desperately wants to make the jump from wired to wireless but struggles with the overall lack of quality offered by many Bluetooth options, the Galaxy Buds are pretty darn impressive.

It’s difficult to talk about wireless earbuds and not mention Apple’s AirPods. In many cases, AirPods were most definitely the catalyst for wireless earbuds awareness — at least to those not particularly versed in tech. I think the pairing process and the ease of use are partially why they get such favorable comments and, naturally, are one of Apple’s most popular products.

In my review of the TicPods Free, I said they might be Android’s first real answer to AirPods. But the Galaxy Buds might have taken Mobvoi’s crown already thanks to a combination of comfort, exceptional battery life, audio quality, and ease of use. Plus they cost almost $30 less than the Apple counterpart.

From the outset, I have to say that I wasn’t looking forward to the shape of the Galaxy Buds. I think I had some misconceptions about the dot-esque design and how they would feel when in my ear canal. Unlike the TicPods Free, which feature a remarkably similar look to that of AirPods, the Galaxy Buds are smaller and much more bulbous.

They are not unattractive in any way, shape, or form. But I can’t say I like the pearlescent two-tone cover all too much. I would have prefered a matte white finish but it does adhere to the color scheme of the Galaxy S10 and S10+, so kudos to Samsung for that at least.

I will say for certain that having worn these buds for just over a couple of weeks now that they are much more practical than having a big long prong running down the side of your ear — which is only really useful when removing one bud momentarily in my experience. 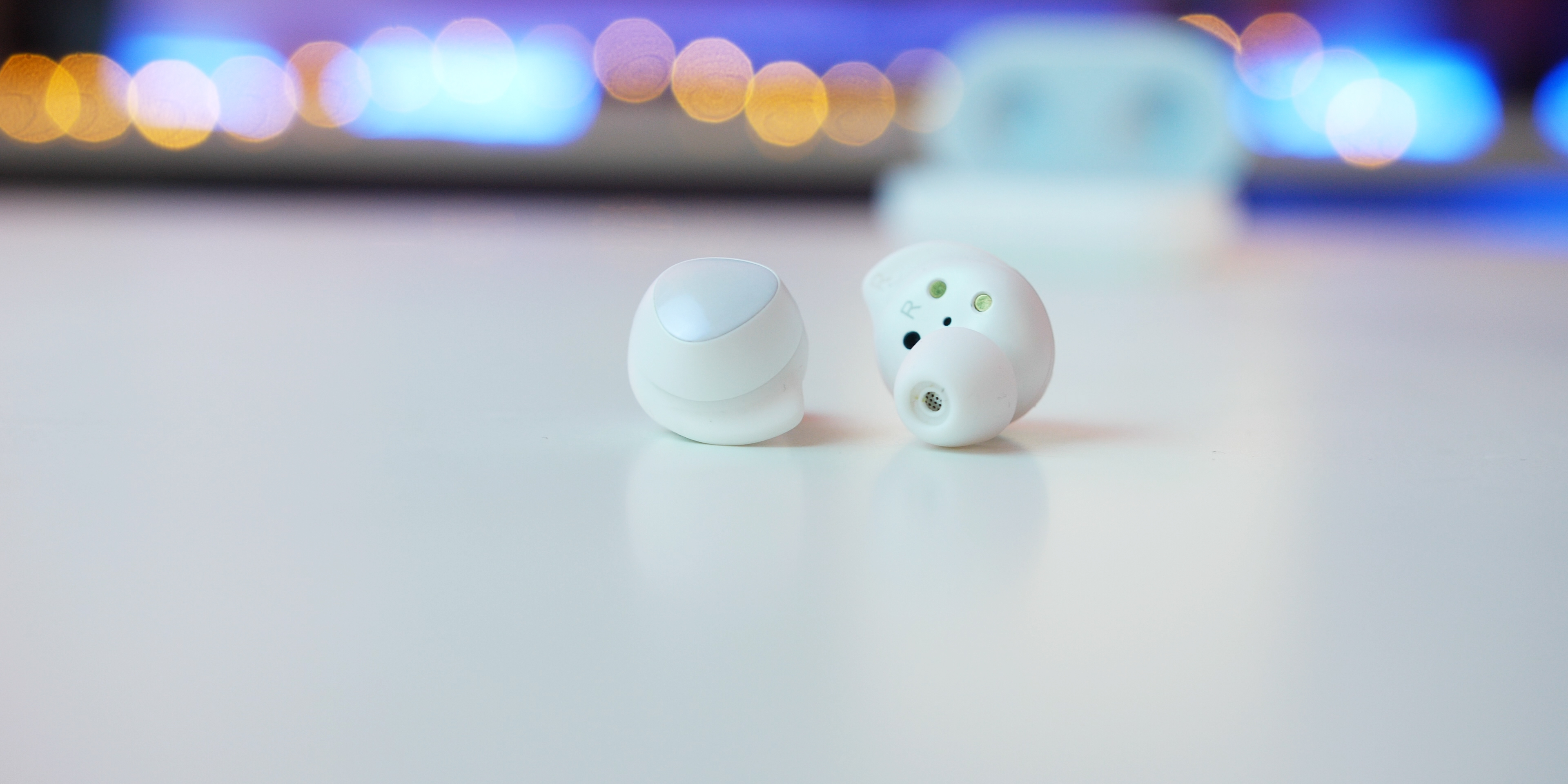 I found that the small rubber tips that come fitted as standard are absolutely perfect for my ears. The process of almost screwing the buds into position makes for a snug and genuinely comfortable fit without you worrying about the buds falling out thanks to the wing tips. These wingtips can be swapped out too if you don’t find the standard options comfortable. I will admit that while at the gym I have had this happen a few times with the TicPods Free.

The case is in my opinion exceptional. It’s not exactly the smallest, but it is in no way large. Plus the flat base means when your earbuds are safely stored, it won’t roll or slide around on a flat surface. That flat base is essential as the Galaxy Buds can be charged completely wirelessly — or on the back of your Galaxy S10 with the Powershare feature.

Being able to stick your headphones on a wireless charger proves to be way easier and more satisfying in practice than when tethering to a cable. If you don’t have a wireless charger though, you’ll be pleased to know that unlike many other cheaper Bluetooth buds, the Galaxy Buds charge via USB-C cable.

Now, this is one area where owning a Samsung Galaxy handset might be advised. The pairing process for non-Galaxy owners isn’t exactly difficult, simply open the Bluetooth controls, open your Galaxy Buds and then tap to pair. That is all pretty straightforward. 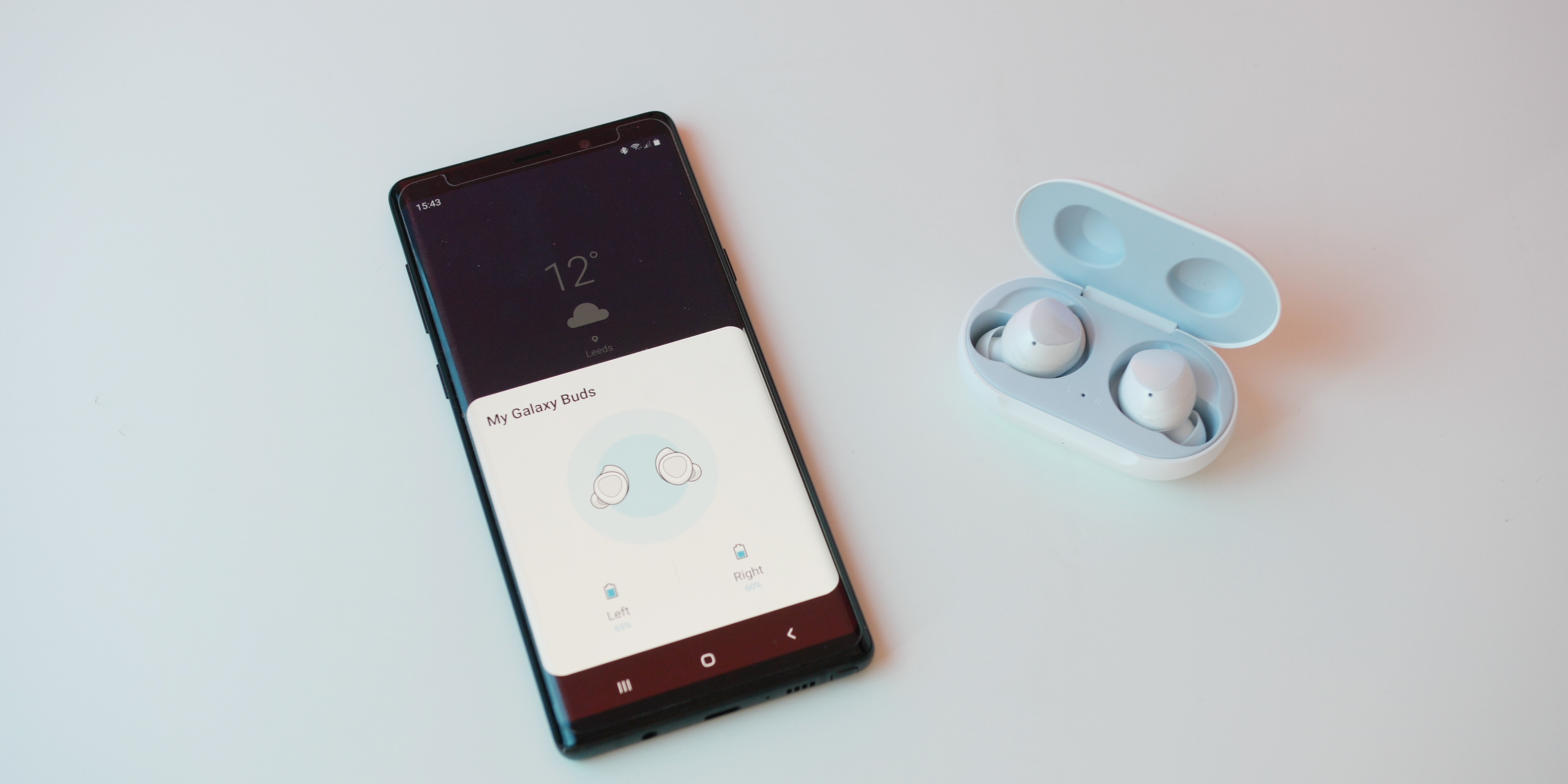 But on a Samsung Galaxy phone, the process is even easier. It has been designed to mimic the exceptional pairing process found on the AirPods — or at least it appears to have been done so. You simply open your Galaxy Buds and this new “quick pairing” feature will take over in conjunction with the SmartThings app.

It gives you a wealth of extra controls and really does feel very intuitive. This is one of the core reasons that the Galaxy Buds are the best companion for anyone with even older Samsung Galaxy handsets.

Thank you, Samsung for tweaking the audio on these earbuds. I am much more of a podcast listener nowadays, but I do genuinely like a bit of bass in my music. The TicPods Free were a little weak in the bass section but the Galaxy Buds do really have some pretty beefy bass considering the form factor. 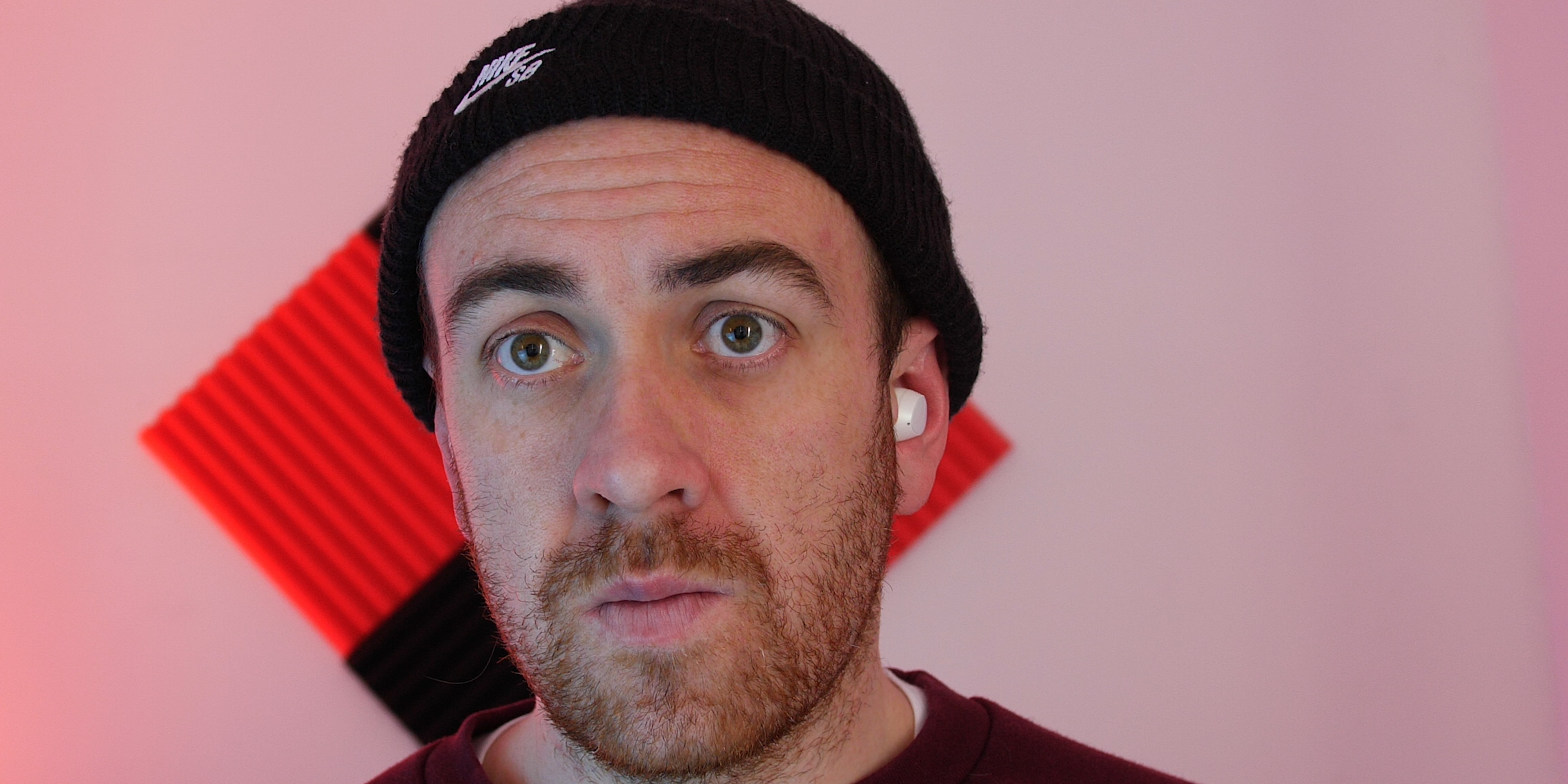 The overall soundstage is far superior on the Galaxy Buds than any other sub-$150 earbuds that I have tried. That does include the TicPods Free, which as you can tell, have proved to be the benchmark for much of this review. Expect crisp, clean audio that is solid through the mids and highs.

You can make adjustments to the audio profile via the Galaxy Wear app on your device but after messing with the bass, I found I didn’t really like the results so kept it at the standard default EQ settings. I’m not saying that the default ‘Dynamic’ setting is perfect, it just happened to be the most neutral for all listening in my experience.

I will say that a couple of times when heading through security at Barcelona’s El Prat airport, I did get some cutouts in the audio as well as when prowling the MWC halls, but it hasn’t posed a problem before or since. I am surprised by this as the Bluetooth 5.0 connection has remained stable but just put it down to a one-time thing, which it has proved to be in my case.

Now the controls I’m not quite as fond of in all honesty. They don’t feel as intuitive as those on the TicPods Free for instance. That said, they do work almost every single time, which can’t be said about the stem touch controls on the TicPods. You can adjust your controls via the Galaxy Wear app if you want to adjust the volume with quick taps and whatnot.

One major gripe though is that although the pairing process is easy, to access these extra controls on a non-Samsung device you’ll need to download at least one of two apps. SamsungSmartThings to pair — which is entirely optional — and the Galaxy Wear app to manage the Galaxy Buds almost exclusively. It is nice to be able to see individual bud battery life within the Galaxy Wear app and there are some nifty controls that many other Bluetooth headphones simply don’t offer. 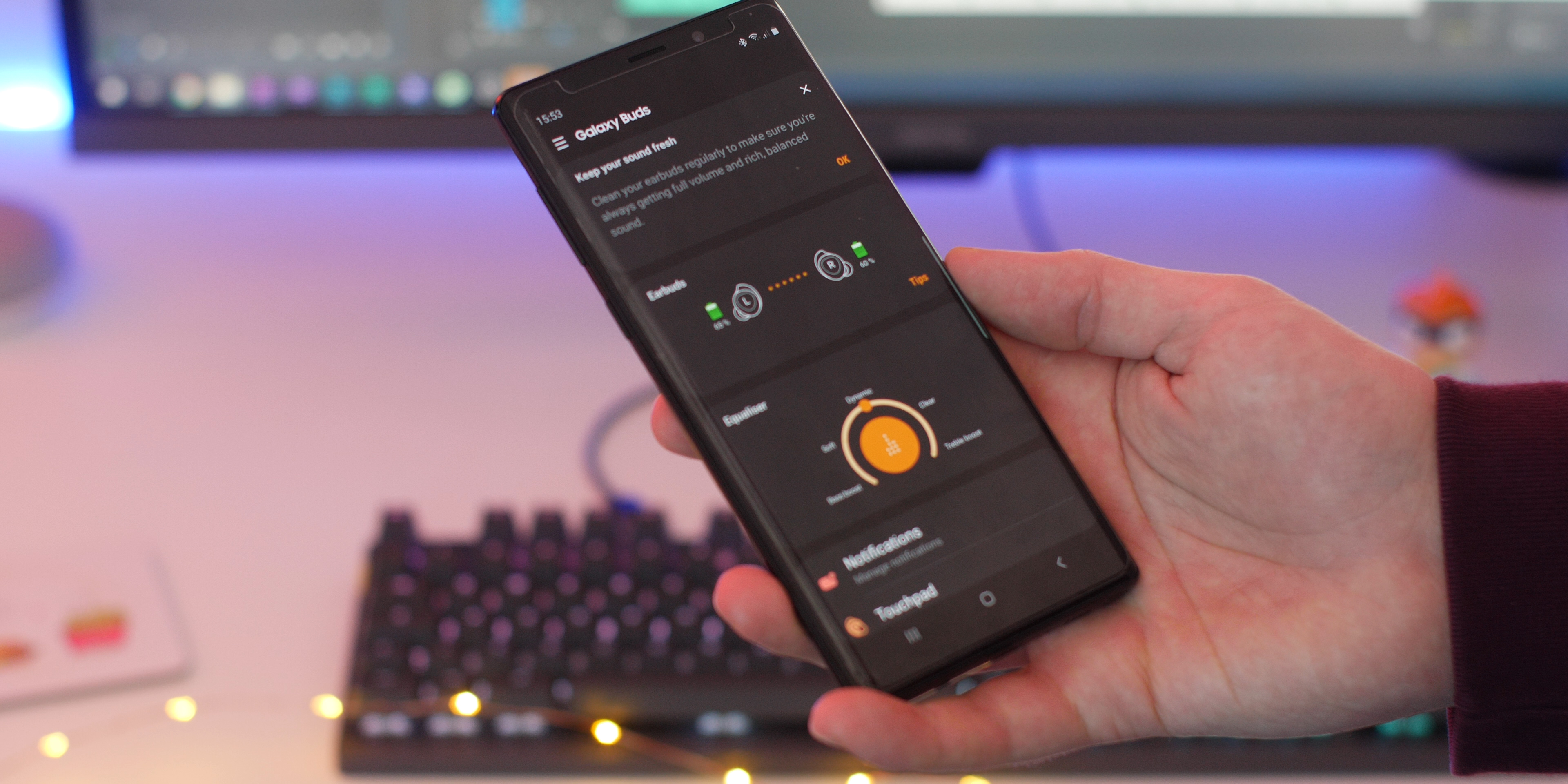 One thing I was frustrated by was the lack of case battery indicator. I’m hoping that this can come in a future update as it’s great to see earbud battery life but the color coding is a little bit of a guessing game. A green light means somewhere between 60 to 100% battery life on the case. A yellow light indicates that the case has between 30 and 60%, with the red light meaning less than 30%. It’s not terrible, but it’s not exactly perfect either.

From here you can enable the ambient sound mode, which is meant to make it much easier to hear your surroundings. I found it did make a difference — albeit minor — but a difference nonetheless. You can map this mode to tap on either of the touchpads, it does make a significant difference and would be great for those that live in a busy city environment I would have thought.

This is one aspect that I usually hate about wireless headphones or earbuds of any kind. Most manufacturers claim vastly extended battery over what is feasible in the real world. The Galaxy Buds claim to be able to last for up to 6 hours of continuous listening. The good news is that in my experience, that is bang on the money.

I took the Samsung Galaxy Buds to MWC in Barcelona, using them as my sole travel and entertainment audio hardware and were almost constantly paired with my Galaxy Note 9. Not once did I worry about battery save my journey back from Spain. 6 hours proved to be accurate, although I did experience slightly over that when flying back to the UK. 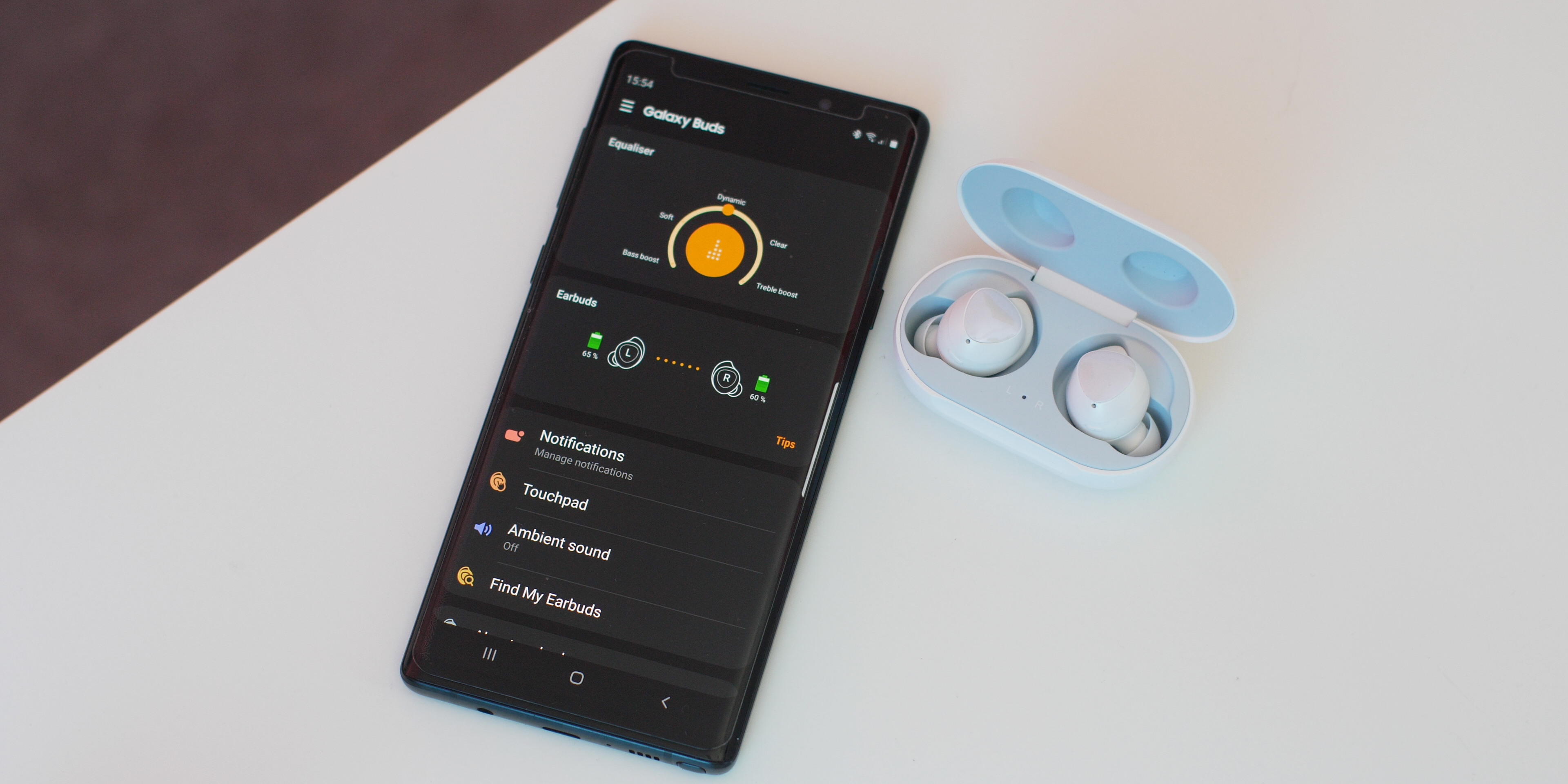 This battery life was all achieved by keeping all of the audio presets at the pre-defined states. I can’t confidently state if changing the audio equalizer settings via the Samsung SmartThings app will affect battery life negatively or not.

The inclusion of wireless charging and rapid charging via a USB-C cable means that the Galaxy Buds are the most versatile when it comes to topping up that battery.

I personally haven’t had much experience with the Gear Icon X, but I was aware that the carry case did have issues not charging when the buds were not aligned perfectly. The magnetic contacts within the Galaxy Bud case ensure that this isn’t a problem at all.

Firstly, I was genuinely shocked by how much I have enjoyed using the Samsung Galaxy Buds. In my experience, they are just so comfortable for everyday wear that I find myself more often than not picking them over the TicPods Free. Another reason I’ve found myself picking these over the TicPods is the better audio and slightly louder peak volume. Also, it would be silly not to mention the simplified wireless charging method and USB-C compatibility.

I would say that if you are looking for some pretty solid Bluetooth earbuds that offer excellent battery life, reasonably good audio, and are comfortable for just about anything, then the Galaxy Buds will be a great overall purchase.

If you are expecting an exceptional overall audio experience, then I’d suggest looking elsewhere or sticking to some wired IEMs or proper over-ear headphones. For anyone who hates charging another piece of what you’d call ‘everyday’ tech, then again nothing to see here, move along.

At present, the Samsung Galaxy Buds are only available via from selected retailers like B&H, Amazon or Samsung directly. At just $130, they are most definitely worth a look if you are in the market for some solid wireless earbuds.