Today’s first Google Stadia Connect livestream brought a lot of new information about the forthcoming game streaming service and hardware, and you can find everything we now know about Stadia below — pricing, availability, and more…

A leak from right before the livestream gave us a lot of the details, many of which we came to learn throughout this first Stadia Connect. But not everything was spot-on, and now we have the official word, so keep reading for all the details.

Which devices will actually be able to run on the game streaming platform at launch has been one of the most common questions since its announcement at GDC earlier this year, and today we get a bit more clarity around that. We already knew that the service would be launching first on Chromecasts, Chrome OS devices, Pixel phones, and Google Chrome.

Today, we get a partial glimpse at some of the limitations that might exist here. For one, Google specifically called out Pixel 3 and Pixel 3a in the Connect livestream, suggesting that Pixel and Pixel 2 owners might not be able to play Stadia games at launch — or that they might have a lesser experience without access to the Stadia Android app. 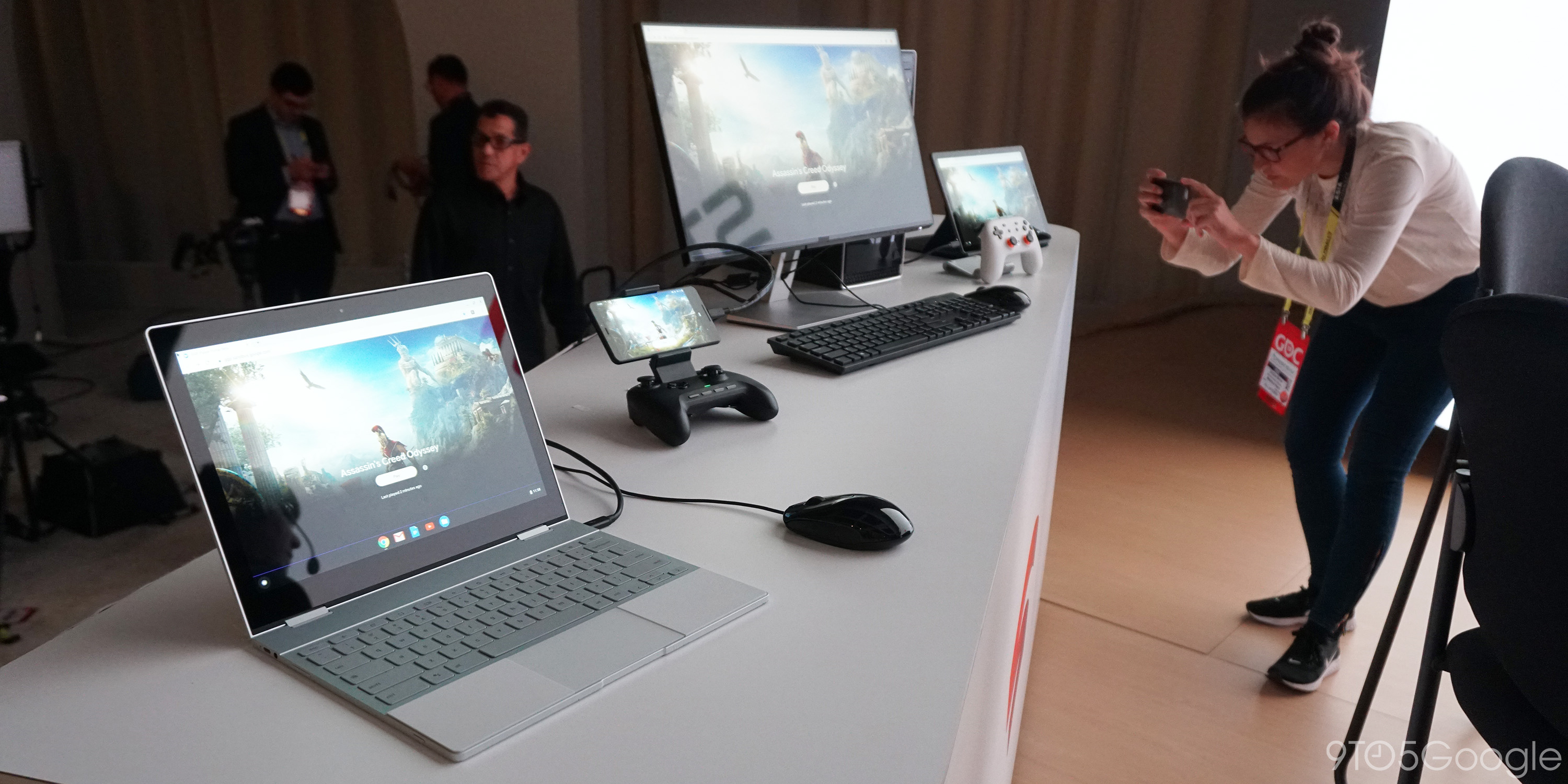 Second, many have wondered which Chromecast devices would be compatible with the service. Based on today’s Connect livestream, during which the Chromecast Ultra was specifically mentioned any time Chromecast came up, it seems that higher-end model might be a minimum requirement. It’s still not clear if standard Chromecasts might work at some point later.

When it comes to pricing, Google today announced that there will be two different tiers: Stadia Pro, which is a monthly subscription (and the only way you can play in November at the initial launch) and Stadia Base, which is free but lets you play games you’ve purchased outright. Google Stadia Pro pricing is $9.99 per month for access to a library of older games that includes titles in 4K at 60FPS.

Next year, the free “Base” tier will launch. The free tier will be capped at a resolution of 1080p/30FPS, and will not include any library  of older games to play. You will only be able to purchase titles directly. This tier also lacks various perks, such as “exclusive discounts” when purchasing full titles. 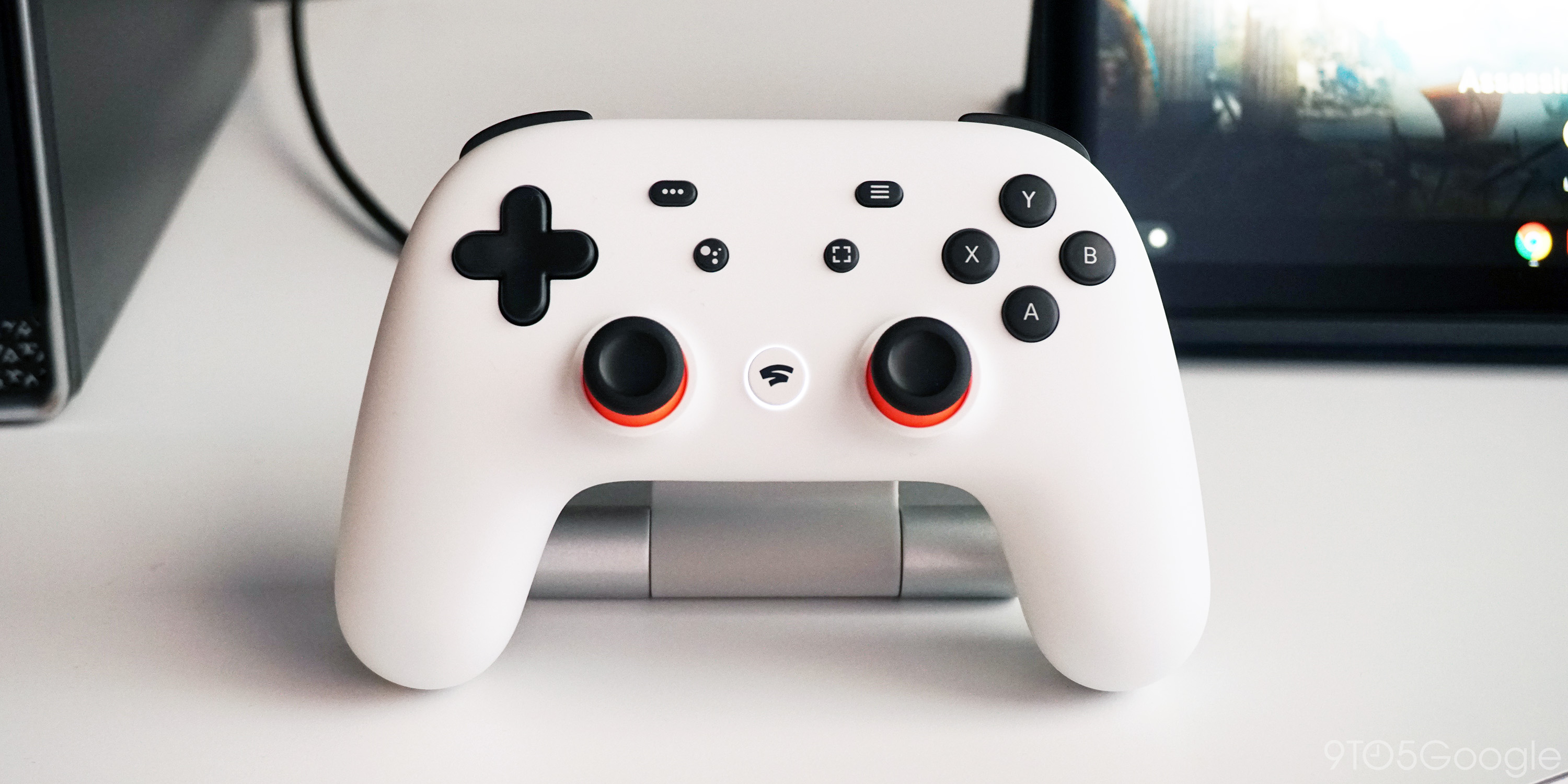 Another price points to be aware of today is the controller, which is available standalone for $69. Google published the full specs for the controller for the first time today, including its USB-C port for charging, wired gameplay, and accessories, Dual-band (2.4GHz / 5GHz) IEEE 802.11 a/b/g/n/ac connectivity, Bluetooth Low Energy 4.2, and more.

The controller is available in several colors at the same price: Cleary White body with orange glossy accents underneath the joysticks, Just Black with white, and Wasabi with bright green. All buttons, however, are black with white text.

The “Founder’s Edition” package, announced today, is certainly the way to go if you want to get started with Stadia on day one, and it’s available to preorder right now for $129 on the Google Store. 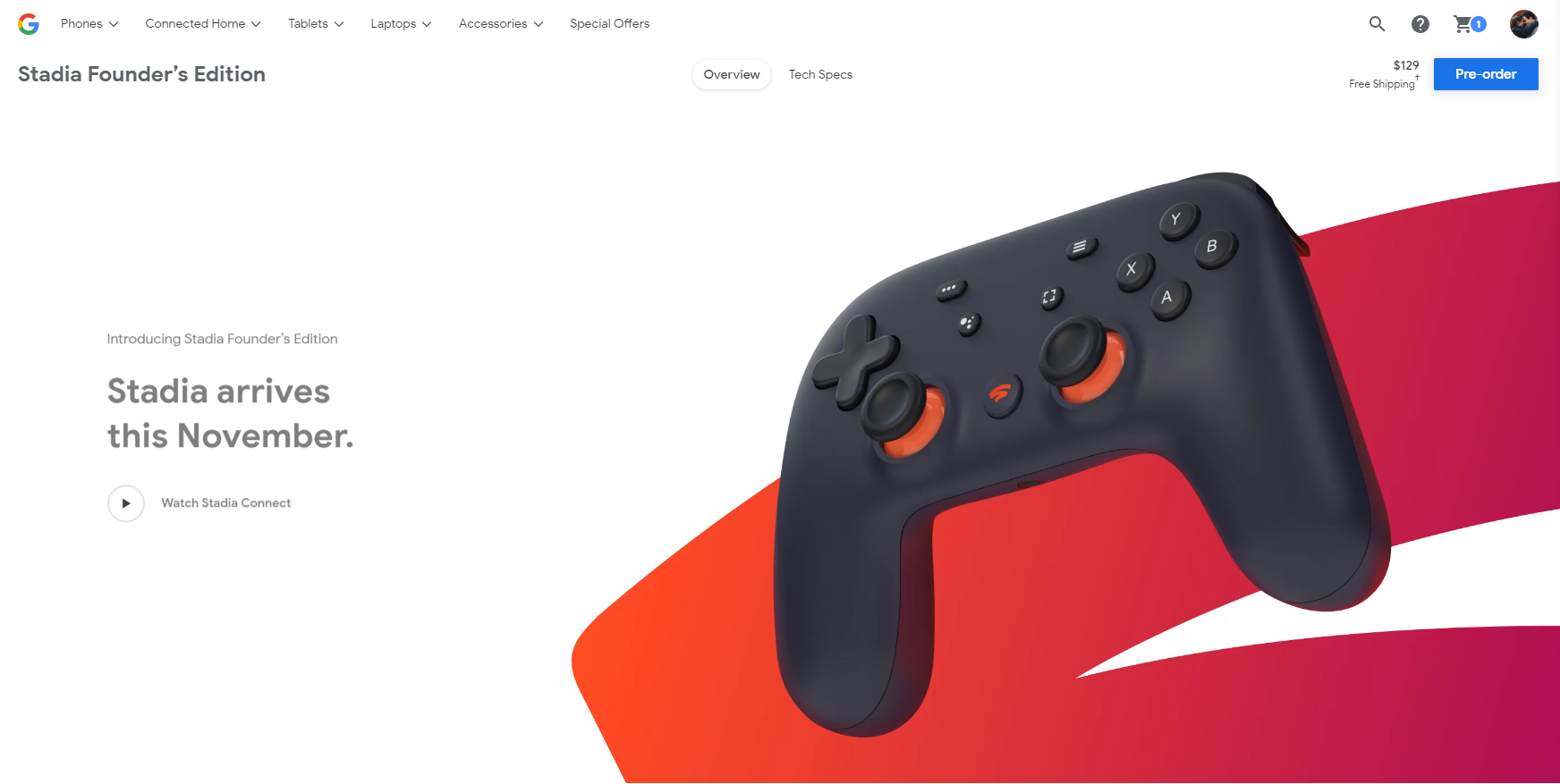 The Founder’s Edition bundle comes with a lot of stuff that Google says is valued at roughly $300, including a limited edition Night Blue Stadia Controller that you can’t buy elsewhere, a Chromecast Ultra streaming dongle, 3 months of the (normally $10/month) Stadia Pro subscription, the ability to choose your own Stadia Gamertag or ‘Stadia Name’. It also includes a “Buddy Pass,” which will let you give your friends access to the Stadia service for a limited time.

According to the Connect livestream today, those who pre-order will get a free copy of Destiny 2: The Collection, but it;’s not clear if that game will remain playable if your Stadia Pro subscription lapses. In most cases, Google says “If you cancel your subscription, you will lose access to games unlocked in the subscription and any add-on or expansion content you have purchased for those games.”

As for when the service will go live to play (and when those who preorder the Founder’s Edition will receive their controllers), all we know is that Google is saying ‘November 2019’. We’d expect that some more details about the service could come out around the launch of the Pixel 4, which might come paired with a pitch as to why the device is perfect for Stadia. Google’s annual Pixel event is typically held in October, so expect to hear more then. And perhaps we’ll get more games details before then in the form of another Connect.

And then there’s the games. Google confirmed lots of games that will be playable at launch and in the first months of Stadia’s availability, including the following highlights:

As of the event earlier this year, the only games we knew were confirmed were Assassin’s Creed: Odyssey and Doom: Eternal, but now we know over a dozen more titles. Our Kyle has been tracking these closely and has a roundup of every single game that’s been confirmed to work with the service so far, so check that out for the comprehensive list.