Yesterday Amazon and Google finally put an end to their bitter, consumer-hostile feud and started to support each other’s platforms. Now, it’s been confirmed that on Google’s hardware, Amazon Prime Video is going all-out with full support for Google Home commands on Chromecast.

If you’re a Google Home owner, or have any other Assistant speaker, you’re likely familiar with the handy feature that allows a single voice command to throw content from Netflix, YouTube, and other linked services onto a nearby TV. It’s a really useful feature, but it’s a shame that not all services support it. While the functionality isn’t live just yet, it’s been confirmed that Prime Video will support Google Home commands.

A support page from Google lists out all of the providers that support Google Home/Assistant commands, and Amazon Prime Video is the latest addition to that list. TV shows and movies from the growing Netflix competitor will be supported for voice commands, meaning you can start up the latest episode of The Grand Tour or binge a season of Doctor Who using just your voice.

Of course, you’ll need to link your Amazon account to your Google account before this can work. Through the Google Home app under Profile > Settings > Services > Videos & Photos, an option will be added to link Prime Video to your account, and Google Home by extension. Once linked, Home owners will be able to cast content from the platform to their big screen, and the functionality will work from Assistant on a smartphone as well.

Update 8/21: Sometime in the past few weeks, Google has removed Prime Video from this support page. To our knowledge, the integration was never widely available.

Speaking to a support agent, a tipster of ours learned that Google is “still working” with Amazon to integrate this functionality. We’ve contacted Google for confirmation on the matter and will update this article with their response.

As mentioned, the option to link your account simply isn’t live just yet, but it should arrive anytime now. Once it starts rolling out, we’ll update this article accordingly. 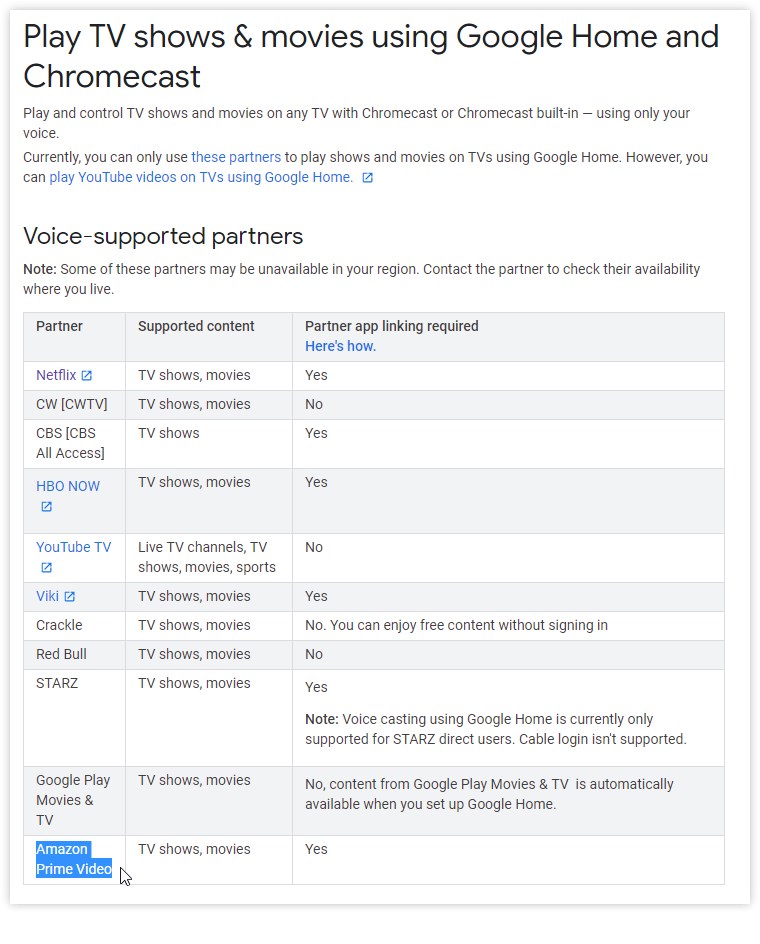