In July, a device hit the FCC that had all the markings of a Made by Google Chromebook, but we couldn’t be 100% sure. This morning, that same device has appeared a second time in FCC listings, all but confirming that it is a laptop-style “Pixelbook 2.”

Over the past year or so, we’ve uncovered a vast swath of evidence that Google is working on some sort of clamshell-style Chromebook, codenamed “Atlas,” which we’ve for now dubbed the Pixelbook 2. Using what we knew about Atlas, we were able to be fairly certain that an FCC listing created by Quanta Computers in July would be Google’s next Chromebook.

However, that listing didn’t give us much to work with, as it only covered an “ID Change” to re-label an Intel Wi-Fi and Bluetooth chip from “PD99260D2L” to “HFSG021A.” We were able to speculate that, given Quanta’s past experience with building Google’s Pixelbook and Pixel Slate devices, and the “G021A” lining up with Google’s recent model numbers, that this new FCC ID was likely also a Made by Google Chromebook.

That being said, nothing in the listing confirmed that we were looking at a laptop, or if perhaps Google and Quanta would be putting this Wi-Fi and Bluetooth chip in some other device. Today, we’ve got our confirmation that “G021A” will indeed be the Pixelbook 2 or at least a Made by Google Chromebook of some kind, thanks to the device being resubmitted to the FCC.

In this morning’s submission, we have a variety of new documents to browse through. The ones we’d be most interested in, external photos and test setup photos, are marked for confidentiality until March, which means this device will surely launch between now and then, most likely at next month’s Made by Google event. In the meantime, there’s a few key details we can glean from what is available.

First, in an appendix to a test report, the testing firm repeatedly refers to the device in question as a “laptop.” This puts to rest any doubts that the device Google and Quanta are working on is indeed a Chromebook. Further, in the test report itself, we see a rough diagram of where the Wi-Fi and Bluetooth antennas will be located, in relationship to the screen and the keyboard. 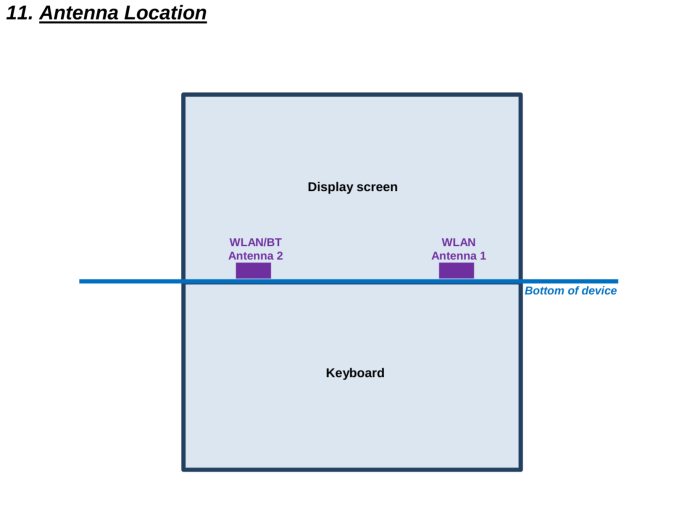 The test report in the FCC listing also points out an unfortunate detail of the Pixelbook 2, namely, that it does not support WiFi 6. WiFi 6, which officially launched yesterday, is also known as 802.11ax, and is a successor to 802.11ac (now known as WiFi 5) that improves performance in congested networks. The test report covers a number of different WiFi connection types, but makes no mention of 802.11ax.

There’s still a lot of unknowns surrounding the Google Pixelbook 2, even after this second FCC listing. The most critical of these is what it will look like, which would go a long way toward showing who Google is developing it for. Leaks we’ve seen thus far have shown a device that is a far cry from the sleek looks that Google Pixel devices are known for, but details like the inclusion of a 4K display indicate a higher-end Chromebook.