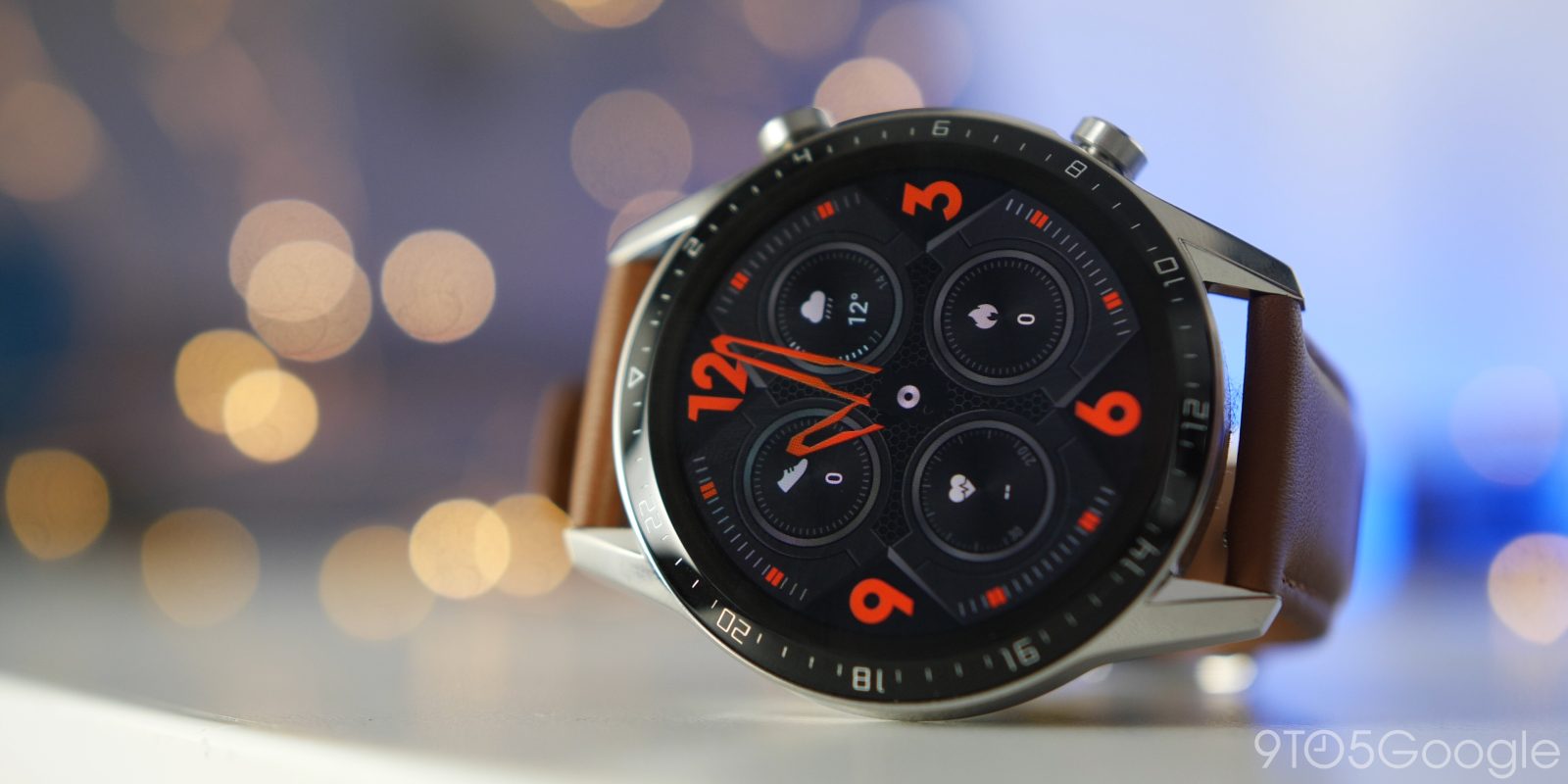 Despite the issues surrounding the Huawei Mate 30 Pro, you might think that a review of the Watch GT 2 might be a difficult one but without the same roadblocks, it becomes a very enticing wearable.

We’ve discussed at length the issues surrounding Wear OS and just what it does and doesn’t offer. Because the Huawei Watch GT 2 doesn’t rely on Wear OS, it doesn’t muddy the water with extra app access or external phone controls. Instead, it simplifies the smartwatch into what you could probably call a ‘fitness band 2.0’ or ‘fitness band+’.

Whereas most fitness bands are aimed specifically at the most active target demographic, the Watch GT 2 carries on where the original Watch GT left off — by giving you a proper functional watch design. It’s also way more likely to come to global markets despite the US trade ban because it doesn’t rely on Wear OS to operate.

Now I originally scoffed at the first-gen Watch GT but have since softened my stance on the basic nature of LiteOS. The change of heart is partly because of the smaller Honor Watch Magic. Not having so many distractions and gaining a watch that acts as a conduit and nothing more really is quite liberating — plus the week-long battery is a godsend.

So with that said, this is our review of the Huawei Watch GT 2. 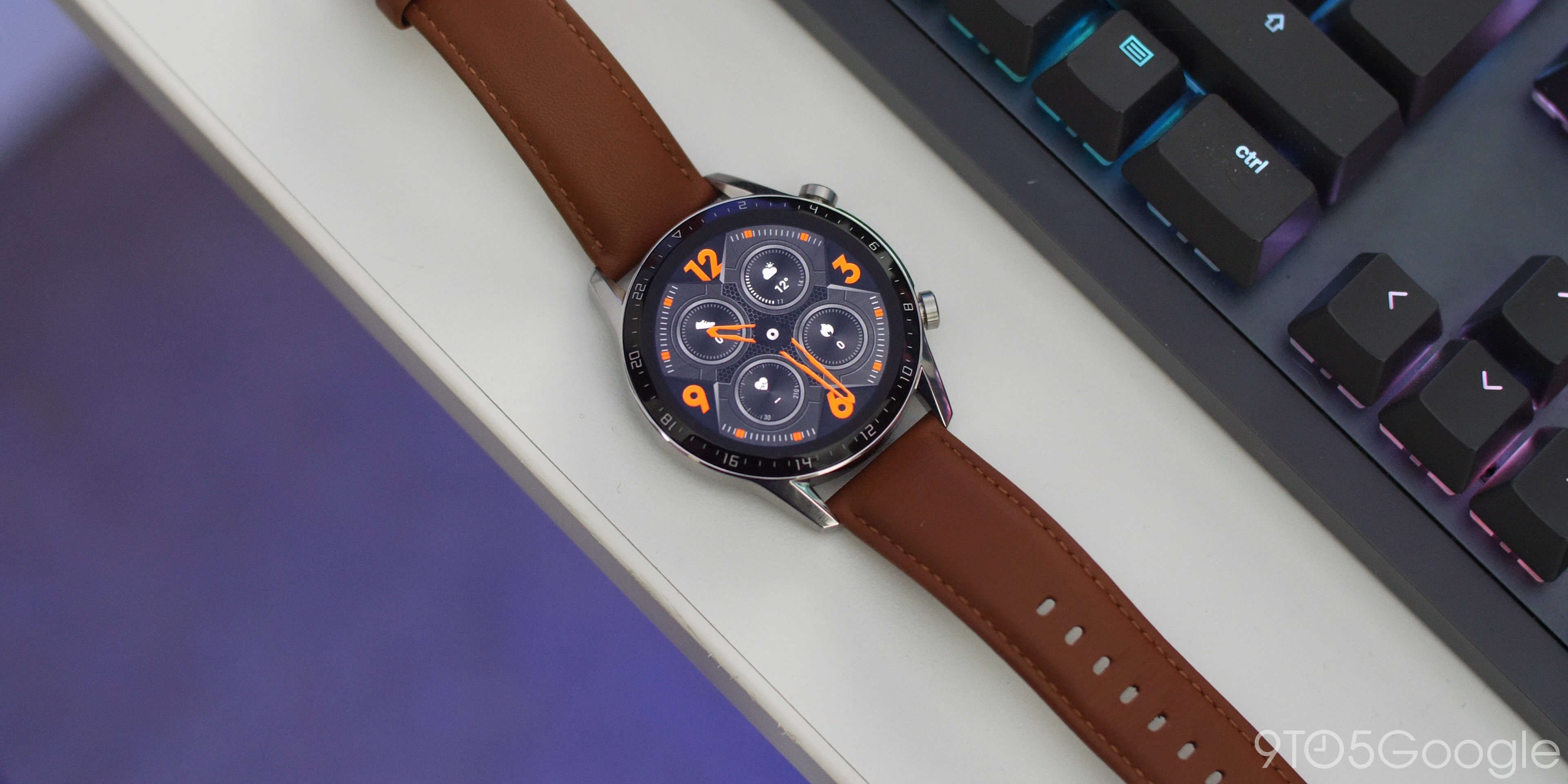 Comparing the two distinct versions of the Watch GT side-by-side and you can see just where the refinements have been made. The crown and bezel on the sequel have been slimmed down quite substantially but you still get the same footprint on the 46mm casing. I do like how the display bezel bleeds into the edges as it really helps ensure taps and swipes are smooth and consistent without catching on a lip or edge.

I am not often a wearer of watches with larger faces but the new silver and black model instantly feels more enticing. Gone is the raised lip around the edges of the display and what you’re left with is a sleek and more traditional feeling smartwatch. The side buttons have a great tactility and are slightly larger, making them much easier to press and activate  — especially if you rack up a sweat.

It also helps that Huawei has listened to some criticism and swapped out the wristbands. Depending on which model you choose, you now get a leather and silicone band in the box. For those of you that prefer a more formal look, the leather strap is perfect to pair with a shirt or sharp suit. Alternatively, the silicone wristband is great for the gym, swimming, or running.

The 1.39-inch OLED is fantastic but does recess into the watch a little. It also includes a slight black border which wasn’t visible on the previous version. I haven’t had any issues viewing the display in most lighting although bright sunlight did pose a bit of a problem. Covering the watch face when the sun gets too bright shouldn’t be an issue.

There is a speaker packed inside the Huawei Watch GT 2 that I must admit really is pretty fantastic for the form factor. It’s clear, has some solid bass, and really does impress. It makes it ideal for making and receiving calls without needing to have a pair of Bluetooth headphones connected. 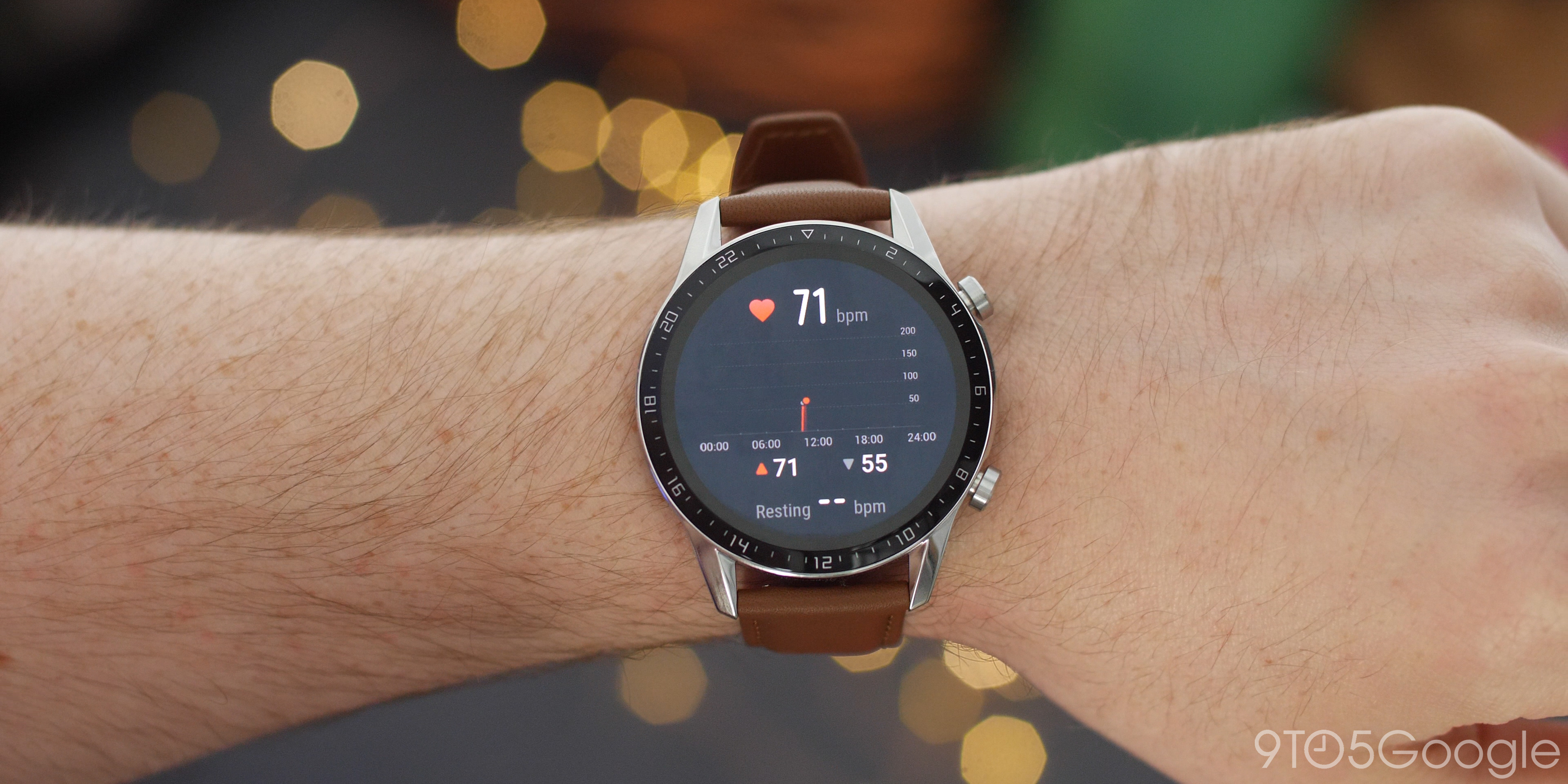 We were led to believe that the Watch GT 2 would come with HarmonyOS pre-installed but it appears to still be very similar to the version of LiteOS we saw on the original model. That means you can only view notifications on your wrist — no ability to respond or reply directly.

Whether that is a dealbreaker is completely up to you. Initially, I saw this as a big problem but have since softened as constant notifications can be a little too much. I tend to turn off non-essential apps and enjoy the Watch GT 2 simply being a digital watch with extra fitness and GPS features.

At times the watch does get a little sluggish — although my unit is technically running pre-release software. A prime example of this is when changing the watch face. Beyond that though, it feels a few steps ahead of the original Watch GT. There are so few apps that come installed that day-to-day performance doesn’t need to be stellar at all times. 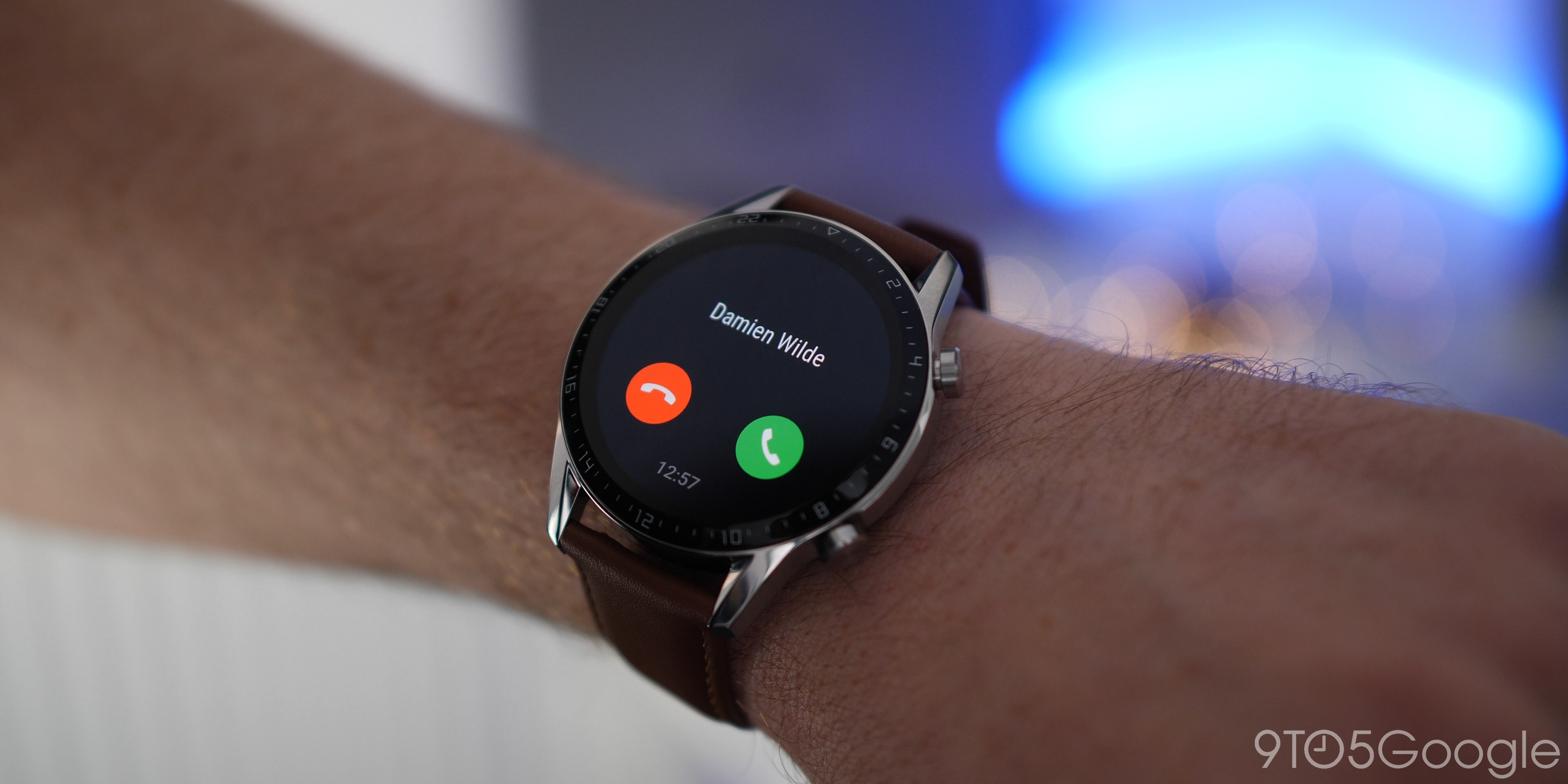 The inclusion of a dedicated music app is a nice touch, as is the ability to store up to 500 songs. You do need to beam them via Bluetooth from your phone to your watch using the Huawei Health app. I have to say that not having to bring your phone with you on a run while connected to Bluetooth headphones is a massive draw — I’ve even connected to my OnePlus Bullets Wireless headphone with no issues.

Fitness tracking features are where the Watch GT 2 excels. With 15 exercises included as standard alongside the basic step tracking. The heart-rate tracking appears to be particularly accurate and ties in well with the Stress and Breathing exercises.

I have tried the sleep tracking feature but found the sheer size of the watch meant that it was uncomfortable for all-night wear. I still feel that sleep tracking is better suited to a smaller band-style watches than those with a traditional shape.

There is also a stress rating that measures your heart rate at certain points to determine your stress levels. I’m not sure if it works but the initial questionnaire is quite funny to answer. 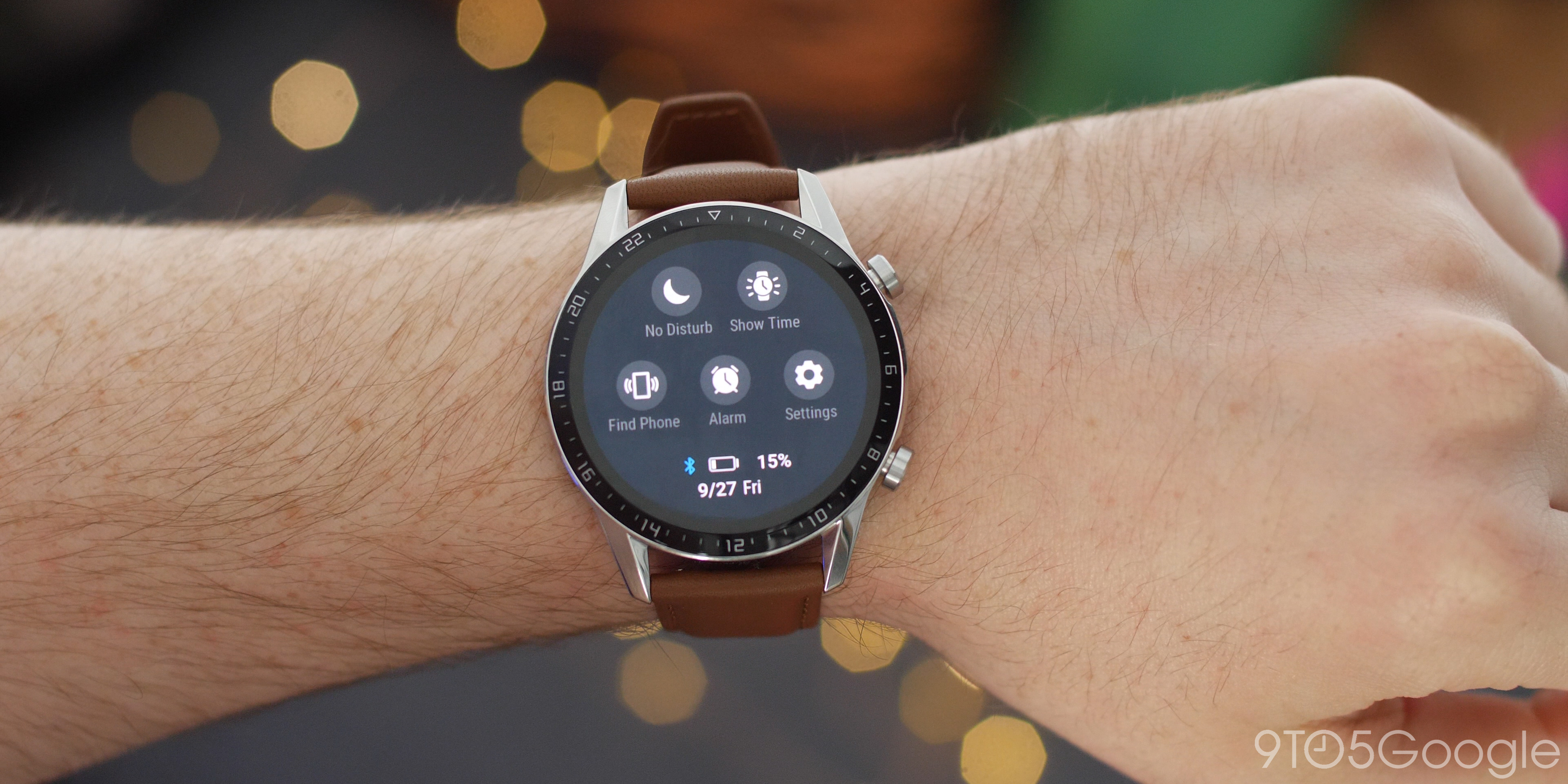 This is one area during my review time that I just knew the Huawei Watch GT 2 would excel. Since receiving the watch at the Mate 30 Pro keynote I have not needed to even think about plugging in. Not having to find a charger every night or every two days is oddly liberating.

Huawei claims the battery can last up to two weeks on a single charge, I have managed a week and the battery has only dipped 30 percent having unboxed at around 60 percent. That really is superb considering that during that time the watch has been tracking my heart rate and GPS location at regular intervals.

Throughout my review period, I have struggled to find a way to describe the Huawei Watch GT 2 to people that think this is a regular smartwatch. It really isn’t. Instead, the Watch GT 2 is more of an ‘advanced fitness tracker’ in a more acceptable true watch form factor. In that regard, it competes more with the Garmins and Fitbits than Wear OS smartwatches on the market.

With a fresh design and two distinct styles to choose from this year, if you are not intent on getting a ‘proper’ smartwatch, then there are few alternatives that I feel hit as many marks as the Huawei Watch GT 2. The biggest problem at this stage will be availability, as it hasn’t hit shelves globally yet.

Where can I get the Huawei Watch GT 2?

At the moment it’s actually quite hard to get hold of the Watch GT 2. There are very few online retailers that you can get the smartwatch from, save importing. Sites like Gearbest have it available for pre-order for around $270 with shipping likely taking a few days once the smartwatch is available. Amazon still lists the original model for $150 — which is actually a great deal — but we do expect the updated version to be made available once a wider worldwide rollout begins.