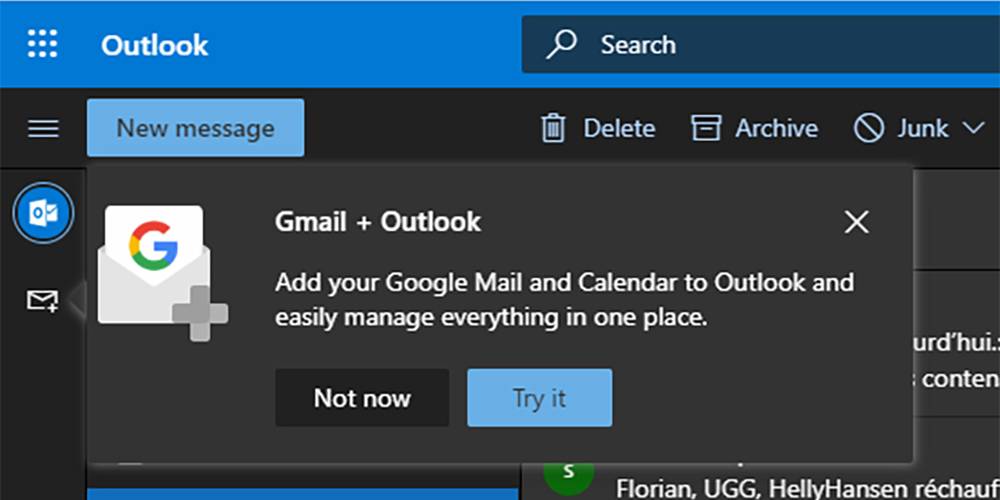 Microsoft is set to allow you to add your Gmail, Google Drive, and Google Calendar accounts to your existing Outlook.com accounts on the web.

A popular and good-looking web client, this is massive news for those that want the option from their web browser. It appears as though the integration is already rolling out to some accounts, with reports on Twitter from Florian B (via the Verge), showing the pop-up menu appear on Outlook.com.

This integration will work in a very similar manner to how it does on the existing Android and iOS Outlook apps. You’ll see from the snippet that the separate inboxes are also organized and found in the sidebar and the neat view of the Google Calendar.

It’s worth noting that Florian B is running what appears to be a test version or early version that allows for integration, as he confirmed that only one Google account can be added. He also notes that when you switch from your Outlook/Hotmail account to your Gmail account, the entire page will refresh — pointing to this being very early on in the test process.

The direct integration with Google Drive allows you to quickly attach documents and files within emails composed within Outlook. This would be a real time saver if you don’t use an Office365 or OneDrive account, or simply prefer Google Docs and Google Drive.

It’s not immediately clear if or when we’ll see all of the extended integration with Gmail, Google Drive, and Google Calendar globally, but this still superb news for those that want a one-stop shop for all of their email accounts and files. Being able to merge work and personal accounts and have them in one dashboard is simply a smart move on Microsoft’s part, too.