PSA: You won’t lose your Stadia Pro discounted purchases when you unsubscribe

This morning, a bit of misinformation surrounding Google Stadia was spread — starting from Stadia’s own Twitter account — saying that Stadia Pro members will lose the games they purchased at a discount when they unsubscribe from Stadia Pro. We have confirmed that this is not the case.

To say that the Google Stadia subreddit has been in a frenzy over the past few days would be an understatement. Everyone is poring over every tweet and statement made by Google and Googlers about Stadia, and one particular tweet caught their attention this morning.

In response to an Italian Google Stadia customer’s question about Stadia Pro’s exclusive discounts, the official Stadia account tweeted to the effect that games purchased with the Stadia Pro discount would be lost when unsubscribing.

We already knew that Stadia Pro’s free games were only yours so long as you’re a member, and would be returned any time you renewed your subscription. To learn that games you’ve purchased would be lost, simply because you got a membership discount, seemed either incredibly inaccurate or incredibly unfair. 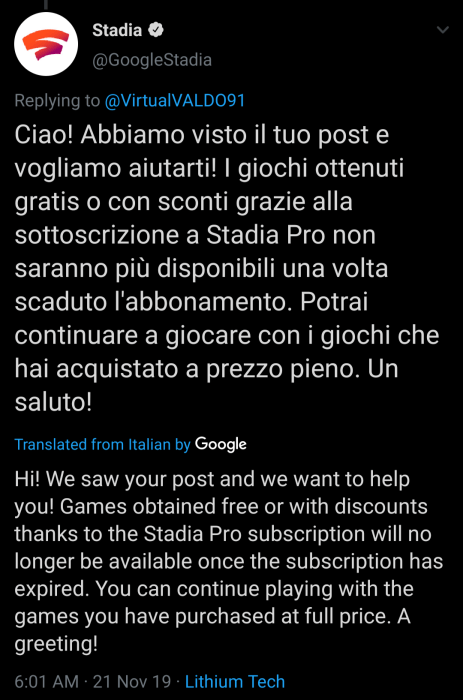 We reached out to Google for a statement to clarify whether the tweet was accurate, and a spokesperson had this to share.

If your Stadia Pro subscription ends, you will keep access to any purchases made while you were a subscriber. You will only lose access to the games you claimed for free during your subscription period.

Very clearly, the only things you lose when unsubscribing from Stadia Pro are access to 4K streaming and the free games you’ve claimed. On Twitter, Google Stadia also issued a correction to their original answer, clarifying, in the same way, that all purchases made as a Pro member are kept.

So, if you were hoping, down the line, to purchase a one month subscription to Stadia Pro for $10 to rack up on discounted games, that is completely allowed, if not expected.